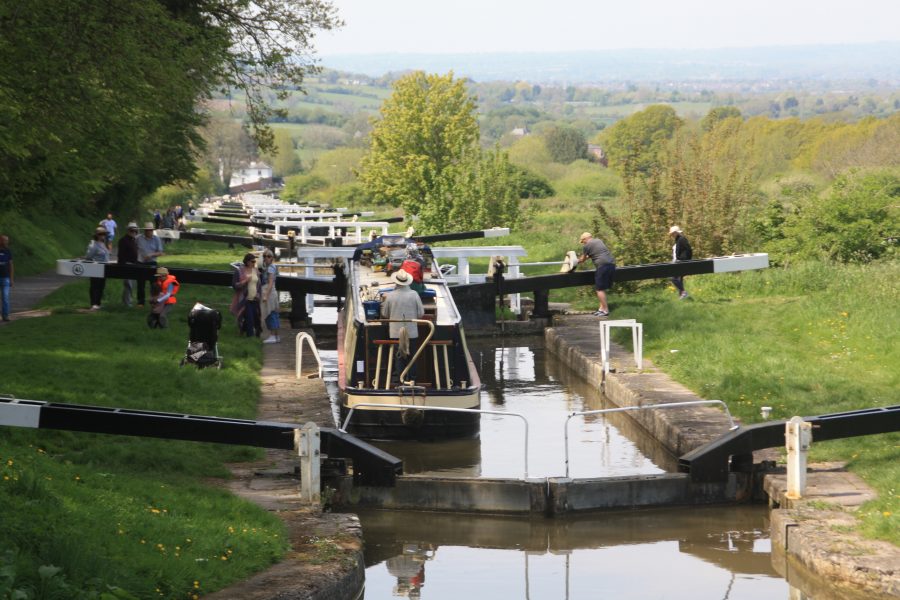 Famous flights of locks, Britain’s longest canal tunnel, its highest aqueduct, a unique boat lift and a city centre canal basin all feature in a ‘Top Ten’ list of iconic waterways sites, voted for by boaters and waterways supporters in an online poll run by the Canal & River Trust.

The poll was set up to mark the tenth anniversary of the Trust taking over running the canals and rivers formerly run by British Waterways. From a shortlist of 32 sites chosen by CRT’s experts, over 5000 voters picked their favourites. Here are Canal Boat’s pictures of the winning ten. They haven’t been numbered from one to ten, we’ve put them in alphabetical order… The Anderton Lift, Britain’s only working vertical boat lift, which raises and lowers boats 50ft between the Trent & Mersey Canal and the River Weaver Brecon Basin, the terminus of the Monmouthshire & Brecon Canal, over 30 miles of spectacular South Wales waterway clinging to the side of the beautiful River Usk valley The spectacular sequence of 17 locks at Caen Hill, part of a flight of 29 locks descending west from Devizes on the Kennet & Avon Canal

To find out more about the western part of the Kennet & Avon Canal, see our cruise guide here Foxton Locks, twin staircases of five locks each which raise the Leicester Line of the Grand Union Canal 75ft to its summit level – and were once paralleled by an inclined plane boat lift Hatton Locks, the impressive sequence of 21 locks which climb out of the Avon Valley as the Grand Union Canal approaches its destination of Birmingham Little Venice, where the Grand Union Canal’s Paddington Arm meets the Regent’s Canal, is usually an oasis of calm in inner London – but (as pictured here) once a year it comes to life for the Inland Waterways Association’s Canalway Cavalcade festival

See our cruise guide to the Regent’s Canal here The iconic Pontcysyllte Aqueduct, carrying the Llangollen Canal on 19 arches 127 feet above the River Dee Standedge Tunnel, Britain’s longest at over three miles, on the Huddersfield Narrow Canal