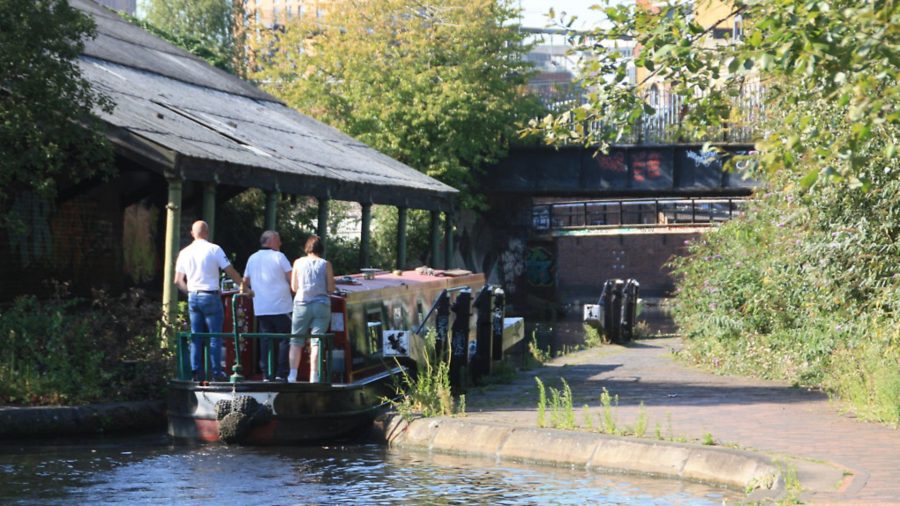 Part 1 of our cruise guide to the Grand Union Canal begins in Birmingham, taking us past varied scenery & canalside pubs to Napton Junction.

* Check out our guide to the best pubs along this route here!

It seems fair to say that for the start of one of the great trunk routes of the waterways network, the beginning (or end) of the Grand Union Canal in Birmingham isn’t the most inspiring – although it’s certainly not uninteresting. But actually, perhaps we should say ‘the beginnings’, plural, because there are two possible starting points for a trip southwards down the route that forms the backbone of the southern waterways between the Midlands and London.

The first of these is approached by taking the Digbeth Branch of the Birmingham & Fazeley Canal, descending Ashted Locks, passing under a long, gloomy and tunnel-like railway bridge, and then (where the Digbeth Branch goes straight on to end in Typhoo Basin) taking a sharp left turn to enter Grand Union waters at Warwick Bar.

The second is entered by taking the southernmost of the four routes which converge on the concrete jungle of Salford Junction, a waterways meeting point completely overshadowed by the maze of overhead motorways and sliproads above known as ‘Spaghetti Junction’.

So which of these two starts is the true beginning of the GU? Well, neither of them originally bore the name ‘Grand Union’. Today’s Grand Union only came into being in 1929, as part of a series of amalgamations in the late 1920s and early 1930s aimed at improving efficiency by putting the long-distance routes from London to the West and East Midlands under one ownership. Rather confusingly, one of these two starting points in Birmingham was originally on the Warwick and Birmingham Canal, while the other was on the Birmingham and Warwick Junction Canal…

The Warwick & Birmingham Canal, opened in 1800, began at Warwick Bar in Birmingham, and ran for 22 miles via 33 locks to end in Warwick. Warwick Bar, like the rather better known Worcester Bar in the centre of Birmingham, was the dividing line between the two canals – with a ‘stop lock’ (a shallow lock, built simply to separate the two canal companies’ water supplies) linking them together, and a covered loading dock (its roof supported on a row of cast iron columns) alongside it. The lock’s no longer needed for its original function today; in recent years its twin sets of gates (to cope with a change of water level in either direction between the two canals) have been reinstated but normally stand open, so you can cruise straight through to begin your trip south down the Grand Union.

The first length is heavily industrial and somewhat run-down at times (and seems to attact more than its share of graffiti) but it’s an interesting start to the journey. After just half a mile, a cast-iron towpath bridge typical of the West Midlands’ urban canals marks Bordesley Junction, where it merges with the route from our second start point – Salford Junction.

Boats starting their Grand Union journey from Salford Junction will begin by cruising the Birmingham & Warwick Junction canal, also known as the Saltley Cut, a two mile short-cut opened in 1844 which begins by crossing the infant River Tame on a low aqueduct, leaving the aerial motorways of Spaghetti Junction behind, passing through another former stop-lock and running alongside the Star City entertainments complex. Amid assorted old industrial buildings and railway lines it climbs the five narrow-beam Garrison Locks, before a long dead-straight length gives a view ahead through several bridges (and under one factory built directly over the water) on the approach to Bordesley Junction.

Bordesley Junction and the 10-mile summit

From Bordesley Junction the six-lock Camp Hill flight follows, with a sharp dog-leg part way up the flight (dating from a relatively recent diversion for a road improvement scheme). Like Garrison Locks, these are narrow-beam, but once we’ve left the top lock behind at the site of the Grand Union’s Sampson Road Depot (once the main Birmingham unloading point for the Grand Union’s own freight carrying fleet) it’s wide-beam from there all the way to London.

Railway lines and factories continue to accompany the canal as it heads out of inner city Birmingham. There are no more locks: we’re on the ‘ten mile pound’, the first and longest of the canal’s three summit levels on its long journey south. Surroundings gradually change from industrial to residential, while a series of lengthy wooded cuttings make for a pleasant and secluded length passing Solihull.

Finally after Elmdon Heath the built-up area is left behind, and the canal winds around the picturesquely-named village of Catherine de Barnes (with waterside pub) before reaching Knowle and the end of the ten mile long summit.

Knowle Locks are a complete change from those we’ve seen so far: their 14ft wide-beam chambers, large water-saving side-ponds (now out of use) and the impressive width of the pounds between the locks contrast with the narrow hemmed-in flights in central Birmingham. They weren’t always like this: the canals forming the northern part of the Grand Union route from Birmingham as far as Braunston were built narrow-beam, but enlarged in the 1930s in the hope that using wide-beam barges would be more competitive; in the event for various reasons trials of wide boats came to nothing, and pairs of narrowboats (which could share the wide locks) were used instead.

You can spot a couple of other changes dating from this rebuild: firstly there’s the distinctive tall enclosed worm-driven ‘Ham Baker’ paddle gear, which you’ll soon find takes quite a lot of turns of the windlass to open, but fills the locks very quickly (and with minimal turbulence, thanks to multiple culvert exits along the length of the chamber). And secondly, some remains of the original narrow locks can still be seen, and if you look carefully you’ll see that today’s five locks replaced six shallower ones – that must have been complicated, given the need to keep the canal open for as long as possible during the rebuild.

Onwards to Hatton (with a few pub stops along the way!)

A quiet length of rural canal with a couple of waterside pubs leads to Kingswood. Here another waterside pub is followed by a junction where a short connecting arm links to the Stratford Canal part way down Lapworth Locks, while the main line continues to Rowington (with yet another pub – this part of the Grand Union isn’t short of them!)

Shrewley Tunnel is a real oddity: it doesn’t have a towpath (so in the days before powered craft, boats would have been ‘legged’ through), but the ‘horse path’ for animals to be led over the top of the hill has a short tunnel of its own. I can’t help thinking that for the effort of digging it, the canal tunnel could have been made big enough to take a towpath. Anway, it’s not just a curiosity, it’s a handy way to get to Shrewley village which is above the tunnel top.

We haven’t seen any locks in several miles since Knowle, but that changes abruptly at Hatton. An impressive flight of 21 locks marches down the hill towards Warwick, its Ham Baker paddles giving it a distinctive look – and providing some vigorous exercise for crews. While catching your breath, look out for spectacular views up and down the main part of the flight, glimpses of Warwick church tower in the distance, the rather fine old maintenance yard buildings (still in use) by the fifth lock down, and more evidence of the 1930s Grand Union improvement scheme such as remains of old narrow locks, and 1930s concrete bridges including the (to my mind) rather unfairly named Ugly Bridge.

Also watch out for the junction just beyond the bottom lock: you’ll need to take a sharp left, as the canal continuing ahead is a dead end arm. The truncated original terminus of the Warwick & Birmingham Canal, it’s now a basin run as Saltersford Canal Centre with moorings and boater facilities. Our left turn takes us into the next of the chain of formerly independent waterways which form the Grand Union route: the 14 mile Warwick and Napton Canal, opened in 1800.

It might have been a change of canal, but there’s no immediate let-up in locks: in less than a mile at Cape there are two more looking just like the 21 at Hatton. This is the start of the Warwick built-up area, but the canal skirts around the town centre with its shops, castle and other attractions some three quarters of a mile away to the south (Bridge 49 is closest).

There’s only a very brief gap between Warwick and Leamington Spa, but it’s big enough to include a couple of aqueducts – one over the River Avon, and one over a railway line. Passing a handy out-of-town shopping centre, the canal then enters Leamington, whose centre is a little way to the north: moor near Bridge 41 to see the town’s attractive Regency buildings.

From Leamington it’s just a couple of miles before the locks begin – having descended into the Avon valley, we now need to climb almost exactly the same distance back out of it. But this time by contrast they’re strung out over several miles rather than one steep flight, and include the only pair of staircase locks on the entire Grand Union Main Line at Bascote. Other than the locks the canal runs through a quiet, slightly empty countryside, but it won’t be quiet for long, as work has already started on the HS2 railway which will cross on a long viaduct.

Long Itchington village is marked by pubs on either side of the canal (and more in the village), a boatyard specialising in working on historic working boats (look out for interesting old craft moored there), and the start of the ten Stockton Locks.

The final few miles of the Warwick & Napton Canal are accompanied by a series of marinas and moorings, including a couple which make use of former arms which once served the local cement industry as well as purpose-built marina basins, as the canal climbs through the final three locks at Calcutt and makes for Napton Junction.

Here we reach a T-junction, where we will need to turn left to continue southwards on the Grand Union. But for the next five miles we’ll actually be travelling on the northbound Oxford Canal – to find out more about this slightly curious situation, see the second part of our cruise guide to the Grand Union Canal, next month.