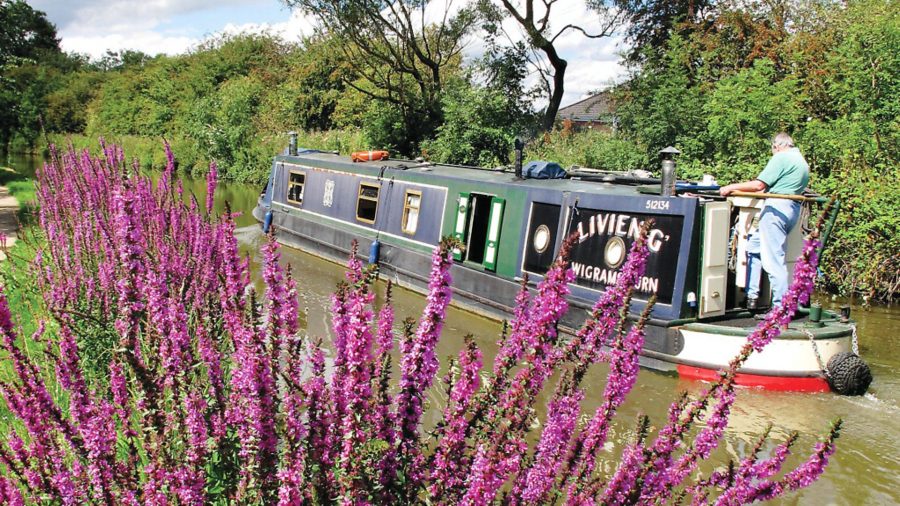 After the tortuous windings of the southern Oxford, the northern part comes as a contrast – a result of an 1830s shortening exercise whose traces are still visible to today’s leisure boaters

And the reason for that change of character is that in 1829, faced with competition from more direct canals, the Oxford Canal Company began straightening out the section between Hawkesbury Junction and Braunston. The old meandering curves were sliced off and replaced by deep cuttings and embankments, reducing the original journey by 14 miles. This left a number of old loops and branches of the original line, of which most are now derelict, but in some cases they remain in water and are used for mooring.

For a while this straightening out achieved its aim of allowing quicker journeys for the working boats, until the railways eventually impacted on trade. Nevertheless, the northern section stayed open for business, while its southern neighbour came close to closing down in the mid-20th Century.

Braunston, situated at the junction of the Oxford and Grand Union Canals, is the hub of the canal system south of Birmingham. Its location makes it a busy boating centre throughout the year and in particular during the annual working boat rally when it is often crammed bank to bank. It has a large marina, two canalside pubs, a flight of locks and a long tunnel all on the Grand Union. Braunston village with its prominent church spire stands on a hill overlooking the waterway.

We begin our voyage at the junction of the Grand Union and Oxford Canals, beneath two elegant cast-iron bridges, known as Braunston Turn.

The canal passes through open countryside for the first five miles between Braunston and Rugby. Near Willoughby Wharf you will see bumps and patterns in some fields. These are remnants of a mediaeval method of farming known as ‘ridge and furrow’ a result of ploughing with non-reversible ploughs on the same strip of land year after year. It still is visible on land ploughed in the Middle Ages but not used since.

The next point of interest is the new Dunchurch Pools Marina between bridges 81 and 82. The development has been designed by the architects responsible for the Eden Project in Cornwall, working in partnership with the landscape architects who have created the most recent Wetland & Wildfowl Trust nature reserves.

Afterwards the canal continues northwards around Barby Hill before passing beneath the M45 motorway, the only noisy intrusion on this otherwise peaceful section of waterway. At bridge 73 there is a waterside pub by a main road on the outskirts of Rugby.

A backdrop of wireless masts used to lead into Hillmorton, but all of the tall ones have been dismantled, and the rest are disappearing to make way for new developments. At Hillmorton there are three duplicated locks, some fine old canal workshops, a boatyard and the excellent Canal Chef cafe. The old canal loop which has been derelict and overgrown for years is being restored by volunteers as a mooring for historic boats.

The canal continues to Clifton upon Dunsmore which has a boatyard with all boating facilities and a hire fleet. One mile further on comes Brownsover, where boaters wishing to stock up on provisions will find a large supermarket and retail centre. From bridge 58 you can take a long walk or a bus to Rugby Town Centre with its many attractions, several related to its role as the birthplace of rugby football. These include the famous public school founded in 1567 which has its own museum (see inset) and the statue of William Webb-Ellis who, according to tradition, picked up a football and ran with it in 1823. While you’re there, don’t miss Rugby’s Art Gallery and Museum.

Back at the canal, a waterside pub stands next to the weeded-up Brownsover Arm, a remnant of the canal’s earlier route. A little further on you will pass an aqueduct followed by a superb Horseley Ironworks bridge that spans the navigable Rugby Wharf Arm, another surviving fragment of the original canal.

Next comes Newbold Tunnel which was built in the 1830s, replacing the original structure whose entrance can still be seen in a field behind the church in the village. The present tunnel has a towpath on each side, and its interior has been illuminated with bright coloured lighting. Just before the tunnel there a pubs a few yards from the towpath (it faces the canal’s original route) and a popular fish and chip shop in the nearby village.

For the next few miles the canal passes through lovely countryside with wooded cuttings. Cathiron has two marinas, both attractively situated on old canal loops. A little further on, Brinklow once had a twelve-arched aqueduct which was filled in when the canal was widened and straightened in the 1830s, and is now a long embankment. Look out for the fine Horseley Iron Works bridge that spans the entrance to the old Brinklow Arm, which once led into the centre of Brinklow village.

The boatyard at Stretton Stop has all boating facilities plus a hire fleet, boat building, provisions shop and chandlery. This is the site of a former canal toll office. The old loop arm to Stretton Wharf is now used for moorings. The Euston main line railway joins the canal at Stretton Stop and remains a close companion for the next two miles. At this point the noisy railway is replaced by the equally noisy M6 motorway, followed by a deep cutting at Nettle Hill where the boater can disappear into the countryside again.

This quiet rural length leads to the village of Ansty, which boasts a waterside pub with an extensive food menu. The final two miles to Hawkesbury Junction are overshadowed by the motorway, with the Coventry Cruising Club’s moorings situated on an old colliery arm that actually runs directly beneath the M6.

Our journey finally reaches Hawkesbury, which marks the junction with the Coventry Canal. Originally disputes between the two canal companies led to the two canals meeting at Longford, following a parallel course for over a mile only a few yards apart. It was twenty-five years before this ludicrous situation was resolved by rebuilding the junction at Hawkesbury.

A splendid cast-iron junction towpath bridge faces a boatman’s pub and there is an engine house that once supplied the Coventry Canal with water pumped from nearby mines, reusing a Newcomen engine (an early form of steam engine) that pre-dated the canal. The engine went to a museum in Dartmouth but the engine house is still there, surrounded by modern buildings.

The junction became a meeting place for boats waiting for orders to load from nearby collieries. The working boat people called the junction Sutton Stop after the Sutton family of 19th century lock-keepers.

One notable Hawkesbury character was Joe Skinner, who was known as ‘the last of the Number Ones’ (owner boatmen) who preferred to work with horses and mules in the traditional manner. Joe was born in 1893 into a boating family and spent all his life on the canals. He married Rose and for years they delivered coal from the Warwickshire coalfields to Oxford. Their boat Friendship stayed in their possession for the rest of their lives (and is now an exhibit in the Boat Museum at Ellesmere Port); after they stopped carrying they were still to be seen moored at Hawkesbury until Joe died in 1975 aged 82, and Rose the following year aged 77.

Now the working boatmen have all gone, but the junction remains a busy boating centre for visitors exploring two popular waterways.