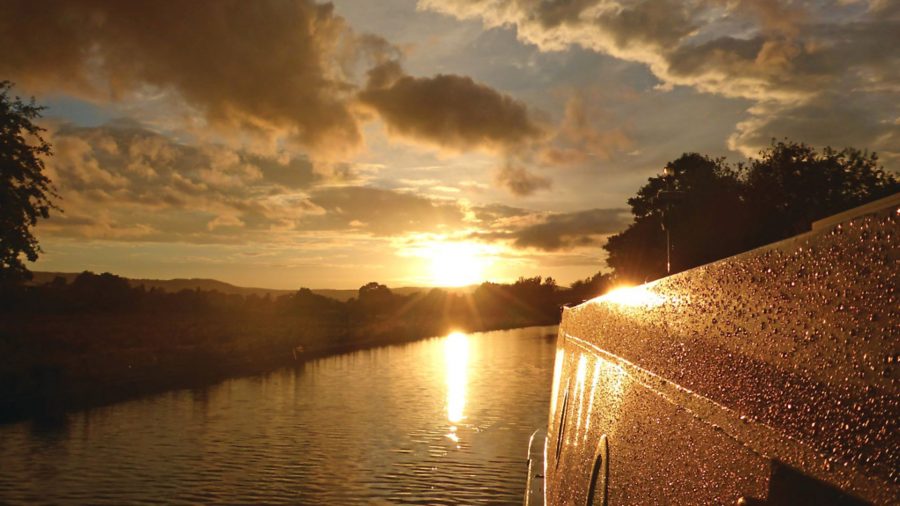 After replacing weary wiring, finding his feet with marina manoeuvres and opting for a sex change, Ian Hutson is ready to cast off for cardinal points

When I met my boat he was a she and was called Moorea. It was only after I’d signed on the dotted line that Dame Julie Andrews appeared on my shoulder, and she began singing ‘How do you solve a problem like…’

If I wished to avoid cruising the canals while being pursued by an Alpine nun I had to change the name. I decided that I might as well do my part for gender equality by changing the sex too. A solid, quintessentially English and thoroughly male name was required. Guy Fawkes? Oliver Cromwell? Biggles? I settled on Cardinal Wolsey. Wolsey was a bit of a robber-baron rotter of his times, but he also did admirable things such as running the country while Henry VIII was too busy hunting and wenching to do so himself. Cardinal Wolsey also somehow suited the sober dark blue stateliness of my new boat.

I’d bought the best hull, layout and engine that I could find and afford, but there was still much work to be done to produce a comfortable, safe, floating man-cave with accommodation for the occasional visitor.

New fire-board and stove surround went in, along with new flooring, extra insulation, one-way glass in the windows and portholes, LED lights in place of the old Halogen ceiling-heaters and blinds in place of the wildlife-habitat curtains. The electrics throughout proved to be of the twisted wires and duct tape school. The main isolation switch isolated nothing. The batteries were connected by cobwebs, tin foil and some near-terminal optimism.

The Cardinal was rewired from stem to stern. Seven metres of entirely unnecessary heavy-gauge cable were removed from the starter circuit alone. The engine stop button was changed from black duct tape over a hole in the instrument panel to a big red, finger-friendly switch.

The time then came when, after months of going nowhere fast, I had to move the Cardinal to take him to see a qualified chap who could tickle the gas equipment aboard. I don’t know who was more out of practice moving, me or the Cardinal. Getting the work done was easy, I moored alongside a pub and my part was eating, drinking beer and comforting my highly-emotional wallet. The gas mechanic got cramp and knocked knuckles on my behalf. Returning to my mooring in the marina though was problematic. The wind had risen and the marina, like most marinas, was about as sheltered as an Antarctic picnic area.

I found my pontoon alright, and then the wind lost it for me and pinned us against the towpath. I saw our berth again, briefly, as we blew past it sideways in the opposite direction, and became pinned up against the boats on the other side of the marina. On the third time of being blown past I just managed to edge the Cardinal’s bows into our slot.

Unfortunately, by that time I was in a Papal-purple funk, panicked and physically flustered. Instead of the required touch of ‘engines half-astern please, Doris’ some sort of directional dyslexia ordered my throttle-hand to engines full-ahead and damn the torpedoes. My mooring evoked the spirit of the Normandy Landings.

I rammed the pontoon so hard that I wouldn’t have been surprised to see 50 Marines leap off the bow and engage the enemy. Glass tinkled, every boat in the marina rocked, and the resident heron hid his guffaws under a wing.

Well, that’s all in the distant past now (distant past is an insurance industry term) and the Cardinal and I are in our second year of slightly glacially-paced free-range exploration. It’s been an adventure, a journey of discovery.

We have baked in heatwaves, been blasted by 60mph winds and been stuck in ice three inches thick. We’ve been cilled at Grindley Brook locks when someone opened the paddles to drain the centre chamber while I was only halfway into the upper chamber. We’ve been back and forth over the Pontcysyllte Aqueduct. We’ve been seriously grounded on the Shropshire Shelf. We’ve gone around in circles in unfamiliar marinas, looking for the hidden service pontoons. I’ve bought coal from the roving fuel boats, trading in the black of night like smugglers moving tobacco and brandy.

I’ve listened to lapwings in the fields, watched foxes slink past at dusk and dawn, met an adder nose to nose, worried about the safety of grebes underwater for too long and fought spiders the size of chihuahuas.

There was one experience though that took my breath away.

One windy April night I was awoken at 3:30am by an almighty banging and scraping noise at the stern. Something was attacking the boat! It surely couldn’t be the French fleet again, the chances of them navigating so far up the Shropshire Union canal unchallenged were slim to “pas possible, mon Emperor”. It had to be either aliens with abduction and probing in mind, or else it was ne’er-do-wells, marine footpads trying to get the locks off the Cardinal’s diesel tank. I switched on the outside floodlights and gave a long blast on the 120db horn. The noise continued.

I performed my best impression of a Doberman barking. No effect. I tried my world-class Hound of the Baskervilles blood-howl while pretending to be a 200lb dog throwing itself against the inside of the stern doors. No effect. The banging and scraping continued.

With some thought as to what I might look like in police crime scene photographs, I got dressed in dark jeans, dark shirt, black trainers and my best ‘missed two days’ medication in a row’ face. The bow doors at least put me 57ft away from the commotion at the stern.

My torch uses six D cell batteries and runs three ultra-bright LEDs. It has a dazzling range of about half a mile. Ducking under the cratch cover and stepping off I just had time to see the insanely brightly-lit, cross-eyed face of the badger that bowled me over and left me sitting on the towpath grass. Good manners are important, so I lit his way for him as he galumphed off at a very respectable pace. Badgers have teeth, bad breath and very rounded rumps.

Daylight revealed a ripe, long-dead hare jammed between the Cardinal and the towpath. I think that Mr Brock had been trying to reach down for a quick snack and had fallen in. The banging and scraping must have been the sound of him trying to get his heavy, wet body back onto the towpath.

That incident, I think, is typical of the bargain you make with a narrowboat. For every occasion when you are soaked through and frozen, fingers sliced and bloodied by hauling against the wind on an ice-covered centre-line, there’s a sensational quid pro quo.

What next, I wonder? The Cardinal will let me know in his own good time.