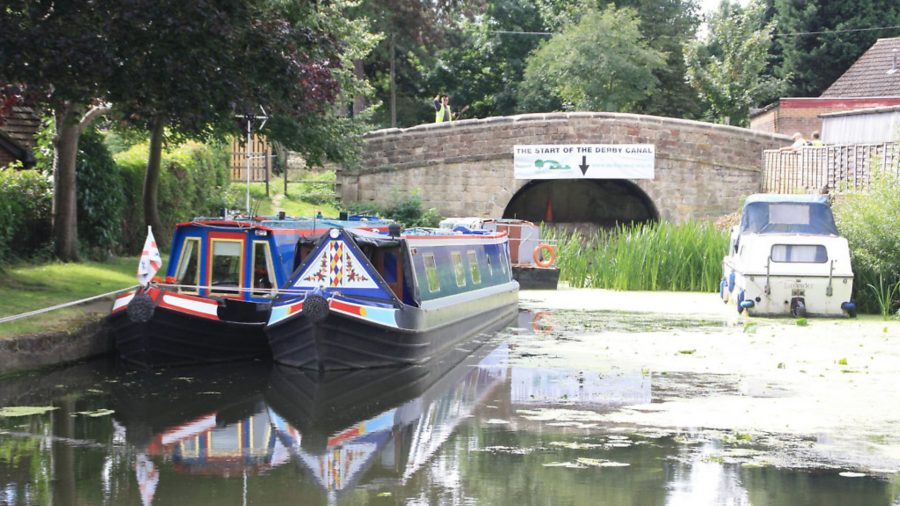 There are some impressive plans for restoring the Derby Canal – including a remarkable boat lift – but now, the Canal Trust believes it’s on the point of turning them into physical progress

Given that it’s some years since we last reported on the Derby Canal restoration in detail, you might be forgiven for expressing disappointment when I say that we can’t report on the number of locks restored, miles of channel reinstated, or other signs of physical reopening. But bear with us, because in this case, there has been a great deal of progress on the unglamorous but crucial behind-the-scenes ‘political’ side of restoration. And Derby & Sandiacre Canal Trust’s Chris Madge is confident that this will be translated into practical work on the ground – within as short a timescale as the next 12 months or so.

We aren’t just talking about a single project, either. There are at least four lengths which are looking likely to see significant physical progress, spread out along different sections of the route, all with different characteristics and different approaches to getting the waterway open.

But before we get into the interesting practical stuff, let’s return briefly to the dull-but-necessary political progress. The Trust believes that by far the most important step forward came in 2010, when the restoration of the entire 15km through route, running through three different local authority areas, was granted planning permission. As Chris puts it, it’s all about “political positioning” – getting recognition for the restoration scheme, control over the use of the route corridor, and protection of the line for the future.

To see how that political recognition is turning into actual restoration, we’ll take a trip along the entire length – heading westwards from the Erewash Canal at Sandiacre into Derby city, then turning south to meet the Trent & Mersey at Swarkestone. It’s a trip you can make yourself, because the entire route can be followed on foot – we did, and it gives a good insight into the challenges faced, and the different ways that DSCT plans to deal with them.

The Derby Canal begins at a junction with the Erewash immediately north of Sandiacre Lock. The junction bridge still exists, and Canal Trust volunteers have recently been at work removing vegetation from the brickwork, and re-setting some coping stones that had been knocked off by vandals. There are plans for much more work in this area, where following an unsuccessful Heritage Lottery Fund bid some years ago, the advice was to ‘do a small project first’. So the plan is to dig out and restore the filled-in first lock, immediately beyond the bridge: matters have been delayed complicated by asbestos in the infill, but investigations have shown that it is relatively low level contamination.

Following on from that, there are no serious problems with restoring the first mile (which survives as a footpath, and passes under the fine 1930s concrete Cockayne’s Bridge). The local authorities are supportive, and the Canal Trust could take over ownership from the council.

Crossing the M1 motorway (which blocks the original canal line) might look tricky, but the Trust believes that an adjacent road bridge is wide enough to squeeze a canal channel alongside the road.

Beyond the motorway there is less to see of the canal, but its course is unobstructed, and (as with much of the route) possible marina and development sites have been identified which could support canal reinstatement. A footpath follows the route westwards past Breaston – where former canal pub the Navigation survives, and may one day have a liftbridge alongside it.

A cycleway follows the canal line to Draycott, site of the next length that’s looking likely to see some restoration work soon. The Hopwood Road crossing, by a dilapidated old brick building, is the start of what the Trust has dubbed the ‘first kilometre’. This section, already partially re-excavated for drainage purposes, is proposed for reinstatement to full navigable dimensions as the first completed length of the restored canal. As a major earth-moving exercise (plus installing a waterproof lining) it is likely to be a job for contractors rather than volunteers, and the cost is likely to be around £400,000. The Trust has already secured £40,000 in pledges towards a target of £100,000, which it feels will demonstrate the necessary levels of support when going for grant funding for the remainder. If the money can be raised, DSCT hopes that the work could take place in either summer 2018 or 2019.

But it’s more than just digging a kilometre of ditch. The plan is to include a slipway and parking, use it to hold trip-boat events, encourage fishing, and in particular to make it a community asset for Draycott. And that’s where the ‘dilapidated old brick building’ I mentioned above comes in…

Built as a set of six canal workers’ cottages, then later used as a silk mill, the building was vacated in 1985 and fell derelict. It has now been bought by the Trust, which has begun initial renovation with the aim that it will combine housing for rent (to bring an income for the Trust) with community functions including a café and a farm shop.

The First Kilometre length ends where the canal passes under the A6005 via another surviving concrete bridge. A footpath continues to follow the line of the canal as it passes through farmland to reach Borrowash, where we find the next restoration site.

Borrowash Bottom Lock was partially restored by volunteers some years ago. The completion of the lock including repairs to wing walls and reinstatement of coping stones (plus a long length of hedgerow work) is seen as very much a volunteer project – although there will be other work needed including creating a water supply from a nearby brook and moving a drain.

Following a well-preserved length above the lock, the partly infilled canal route forms a linear park around the south side of Borrowash, leading to Spondon, where two surviving bridges – a traditional brick arch and a steel beam bridge – have already been restored.

Beyond there, however, things get more difficult as the canal approaches Derby. Originally it continued west into the city, crossing the unnavigable River Derwent on the level before heading south to Swarkestone. But with parts of the route on both sides of the river having been built on, the Trust has gone for a more radical approach. A new route is proposed which will cut across southwest from west of Spondon, bridging the Derwent on a new aqueduct alongside an existing railway bridge, before continuing south of the river (where a new culvert has already been built to carry it under Pacific Way) and rejoining the southern length of the canal. (Until it’s built, those following the route on foot will need to take the footpath alongside the A5111, then take the riverside path westwards before turning left and following the signs to Swarkestone.)

Having rejoined the original route south of the Derwent, there is a footpath and cycleway following the line all the way to the Trent & Mersey at Swarkestone – including three surviving bridges and clearly visible remains of two locks. Unfortunately, when the new A50 was built it made no provision for canal restoration, but there are options for crossing the road by making use of a stream culvert or farm bridge nearby.

That completes the through route, but misses out the city centre – and a restored Derby Canal that didn’t serve Derby would be rather missing something. So we will return to where the proposed new aqueduct would cross the Derwent to look at DSCT’s proposal for rectifying that omission – via what the Trust has dubbed The Derby Arm.

That isn’t ‘arm’ in the sense of a branch canal. No, the Arm is the name coined for a proposed boat lift. Its caisson (tank) will lift boats bodily from the canal (adjacent to the new aqueduct over the Derwent) and lower them into a short new cut built at a lower level, leading to a junction with the river, which will then form the route into the city (and which you can follow today, via the riverside walkway). Artists’ impressions show a device looking rather like one of those ‘trebuchet’ catapult contraptions that mediaeval armies used for besieging cities. It comes with a hefty price tag of £18m, but DSCT believes the Arm can form an attraction which would actually be commercially viable and generate a profit.

Sceptics will look back to a decade or more ago, when having seen the success of the Falkirk Wheel in attracting funding to restore the Scottish Lowland canals, restoration groups all over the country were incorporating sometimes rather fanciful ideas for boat lifts into their plans – several of which have since been dropped.

However Chris points to the 650,000 visits per year to the Falkirk Wheel; to the fact that there is an empty triangle of land by the Derwent that’s earmarked for high-standard, high-value regeneration, and lies adjacent to a suitable site for the boat lift; to its proximity to the M1, to centres of population, and to other attractions such as the velodrome, football ground and leisure areas – and to the ‘political’ angle which could see a developer paying the cost of building the Arm as part of a planning agreement.

You’ll be thinking that this isn’t going to be one of the parts of the project that’s likely to see physical progress in the next year or so – but in fact, in a more modest way, it is. Derby City Council is supporting the proposed establishment of a small trip-boat operation on a 2km length of the river in the city centre, linking up with the historic Silk Mill, credited with being the world’s first factory and pre-dating the canal. It’s hoped that public trips will start operating next year. And having established the idea of boating on the river, the Trust has got together with the local canoe club to survey the water depths heading out towards the location for the Arm, as a first step towards making it navigable.

In this journey along the canal, we’ve seen some very different approaches to reopening – the volunteer-led plans for Sandiacre and Borrowash, the community approach at Draycott, the ‘big business’ ideas for creating the Derby Arm boat lift, and the local authority getting involved in setting up a trip-boat operation.

But one thing they all have in common is that they aim to turn the political progress into practical work. Chris believes they will answer people’s ‘But what’s on the ground?’ type questions. As he puts it, “The disbelievers will become more believing”.