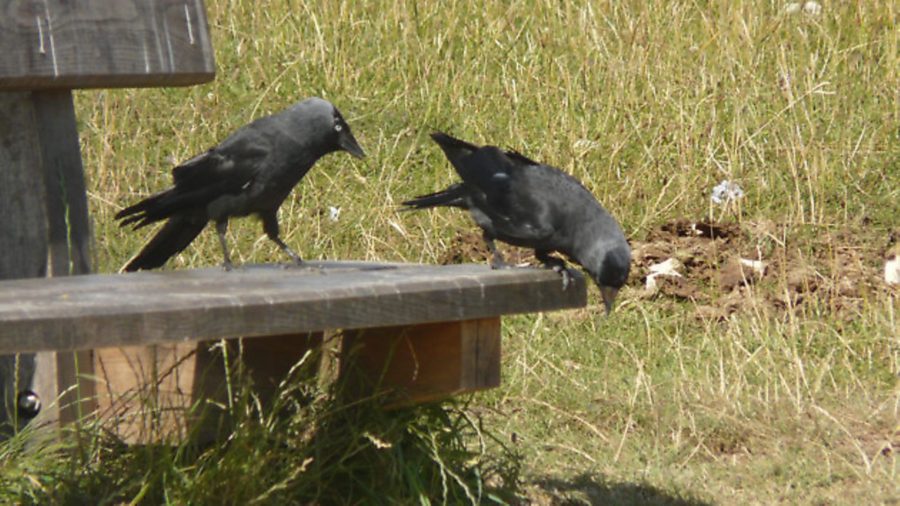 After the harvest comes in, nature’s knacker men take over the fields and eat almost anything, as Pip Webster explains

“Delicious autumn! … if I were a bird I would fly round the earth seeking the successive autumns” (George Eliot).

Once harvest is safely gathered in, flocks of finches and other small birds roam farmland in search of seeds, while nature’s knacker men, the larger black corvids (members of the crow family), will eat almost anything.

You often see a ‘parliament’ of rooks, ‘clattering’ of jackdaws, or a ‘murder’ of carrion crows in the fields, pecking through animal dung in search of insects, or following tractors, eating leatherjackets (the larvae of daddy longlegs – craneflies) turned up by the plough.

Both in the air and on the ground, there is an irrepressible jauntiness about jackdaw movements and their light-coloured eyes have a piercing intelligence. Their contrasting grey nape and dark grey breast feathers, which become especially prominent after the autumn moult, distinguish them from the iridescent black larger corvids.

The resident UK population has increased by about 50 percent over the last 40 years and they seem quite as at home in the urban landscape as in farm and woodland. Many Scandinavian jackdaws migrate south-west to overwinter in our milder climate.

“… Greybeard jackdaws, noising as they fly” (John Clare) bear a doubly onomatopoeic name: a sharp “chyak” is a characteristic contact call and the more grating “daw” is an alarm call. Etymology can be obscure. ‘Jack’ is used in animal names to signify a small form, and jackdaws are noticeably smaller than their cousins, while ‘daw’ meant knave during the 16th century. Their liking for bright, shiny objects may have given rise to the Latin specific name Corvus monedula – ‘money-bird’.

It can be difficult to distinguish carrion crows from rooks, especially when they are on the ground in a mixed flock containing youngsters. Adult rooks have what looks like a white beak, while rough grey-white skin, free of feathers, extends around the base of the bill and its chin. They generally have a looser fit of their plumage, as the feathers hang down the upper legs rather like a pair of baggy shorts.

They are intensely sociable birds, in marked contrast to the carrion crow’s solitary or paired existence. Old country folk rarely bothered to separate the two birds: the ‘scarecrow’ is a classic misidentification – these men of straw were never intended to guard cereal crops from a solitary bird, but from grain-devouring rook flocks.

At dawn and dusk you can watch the movements of the Corvids between their roosting and feeding grounds: “…many a mingled swarthy crowd – rook, crow, and jackdaw – noising loud, Fly to and fro to dreary fen” (John Clare). The most conspicuous and noisiest are the fast-flying rooks, so maybe we should measure the shortest distance ‘as the rook flies’.

These menacing looking large black birds rid the countryside of much unwanted debris, but they are guilty of helping themselves to the eggs and chicks of other birds when available.

Also scavenging in the countryside are the red foxes. In addition to live mammalian prey, birds, frogs earthworms and insects, foxes eat carrion, the contents of bin bags and fruit – adolescent foxes must find the abundance of fruit in autumn a boon while they are still perfecting their hunting skills.

Fox cubs are born between late March and May and as they grow up, the links within the family diminish. They soon start to travel alone in search of food and, although young vixens may remain together in the home range for several years, young dog foxes usually disperse by late autumn. Some mature foxes may also make excursions out of their previous territories in search of food.

With night coming earlier and pressure on space and resources, you are more likely to catch a glimpse of these usually nocturnal hunters moving around the countryside.

Wildlife on the waterside: mallards in autumn

Wildlife on the waterside: butterflies

8 bat species to look out for on British waterways