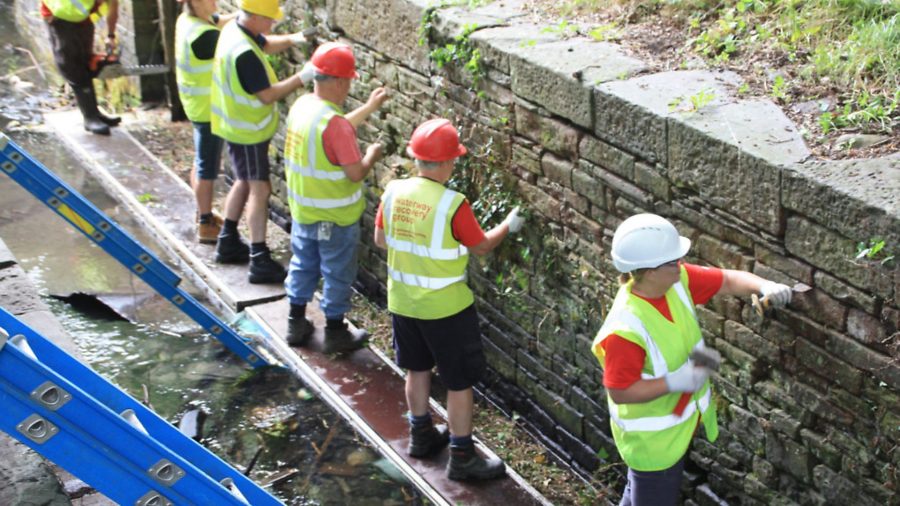 The author spends a week as a volunteer on the Swansea Canal, and finds out first-hand what the prospects are for opening up navigation in this part of South Wales

“So who’s the youngest here?” asks Waterway Recovery Group’s Swansea Canal camp leader Dave, launching into his introductory talk to his mixed group of volunteers of all ages from students to retired folk. Emma, an 18-year-old taking part in the week-long camp as part of her Duke of Edinburgh’s Award, appears to fit the bill.

Dave looks at her, shakes his head sadly, and says, “Not in your lifetime”. This (as expected) prompts comments from the various WRG old hands along the lines of “They said that about the Huddersfield Narrow Canal.”

Dave makes it clear that his comment was very tongue-in-cheek. Like most canal restorations, it would be foolish to make any predictions on whether and when the canal will reopen; but there will be many smaller successes along the way, and our week’s work hopes to contribute to these, as well as to the long-term goals.

But he’s got a fair point – this isn’t going to be an easy or quick restoration. In the decades since the 16-mile route from Swansea Docks to Abercraf was abandoned in stages from 1928 to 1960, it’s suffered a great deal from later development on the route. Like most South Wales canals, it runs along a populous valley where building space is at a premium: roughly speaking the top one-third has been lost to road improvement schemes; while the bottom one-third has disappeared under the expansion of Swansea city. Even the surviving six-mile central length was lopped into three chunks by the construction of a council yard on the line near Clydach and the infilling of a half-mile section below Pontardawe.

Still, at least that avoids the usual arguments about the rights and wrongs of beginning restoration work in the middle of the canal, rather than trying to open up navigation as an extension from the existing network (or in this case, from the Bristol Channel).

There simply wasn’t any option. The early work of the Swansea Canal Society in the 1980s and 1990s concentrated on clearing the upper part of this central section, above Pontardawe; since the rejuvenation of the Society in recent years after a quiet period, work has shifted to the middle part below Pontardawe – and in particular to the two Trebanos Locks.

But all this canal restoration theory isn’t occupying the minds of most of the volunteers as we pile into the minibuses and head for the worksite on the first morning: we’re more interested in the job in hand. This is the fourth WRG week-long camp since work began at Trebanos, and the first to concentrate on the upper lock.

On the face of it, it doesn’t look in bad nick: the chamber walls still stand (albeit with a certain amount of vegetation growing on them), and the overflow bywash has already been restored. Sure, the bottom five feet or so have been filled with rubble, silt and detritus, but that actually makes our job slightly easier: we can simply lay sandbags and boards on the infill to make a dry working platform, rather than needing to scaffold out the chamber.

But once we get to work stripping out what remains of the old mortar ready for re-pointing all the stonework joints of the entire lock, it’s clear that there’s plenty to keep us busy for the week. In some places it’s straightforward, but elsewhere removing the roots of plants and small saplings growing in the walls leads to some dismantling and reinstating of sections of wall – and one of the bottom gate recess walls needs a complete rebuild.

Still, by the end of the first day we’ve stripped out most of one chamber wall, and on the second day we’re well into re-pointing – using a traditional lime mortar, several of our volunteers having been trained in its use by heritage lime mortar specialists Ty Mawr Company at a recent WRG training weekend. We’re joined on site not only by the leaders of SCS’s restoration team, but also by representatives of the Canal & River Trust (which is still responsible for most of the canal) including heritage specialists and a Trustee. They all seem impressed by our work so far…

There’s less optimism the next morning, as it dawns wet and miserable. Trying to re-point mortar joints in these conditions would be (as it were) pointless; the leaders quickly declare a day off, and most of us drive off to the Big Pit mining museum. The rain eases enough that on our return trip, we stop to picnic by the Monmouthshire & Brecon Canal – thus showing our new recruits what a restored canal looks like and how a lock works, and reassuring all that an isolated Welsh canal can be a real success, whatever the naysayers might think.

The weather couldn’t be more different the next morning: shorts and T-shirts are the order as we resume our work. We’re pleased to see that once the rain stopped the previous evening, one of the CRT chaps dropped in and added the final touch to the completed re-pointing: tapping the refilled joints with a stiff brush to create a good finish and push the mortar deeper into the joint.

Work continues on repairing and re-pointing the rest of the offside wall, and meanwhile a second job is under way above the lock. We’re rebuilding sections of towpath wall with a combination of concrete-filled sandbags at water level and a more traditional looking stone-built capping.

The Canal Society are impressed by our work so far (by the end of the day, we’ve done most of what they expected to finish in a whole week); but it’s also good to see our progress in the context of the restoration of the canal. After we knock off, we take trip down to Coed Gwilym Park, a mile down the canal, where the Society runs a canoe hire operation, and most of us go for a paddle along the canal. This is a section where the society has applied for funding to dredge a length (even in canoes, we can vouch for the need for dredging). This would, if successful, enable it to bid to host the Inland Waterways Association’s National Trailboat Festival in 2019 – and in the longer term, to plan a public trip-boat operation which would mean that ‘our’ lock would be re-gated and see regular use.

We also get to see the lower limit of this length of canal for now, where some 50 yards (including a lock) were culverted and the site used for a council yard. That’s no longer the obstruction it once was: the yard has closed, a towpath base is being laid by SCS volunteers prior to the path being opened up (with Sustrans support, as it’s part of the National Cycle Network), excavation of the canal channel will follow, and even the lock won’t take too much work. It turns out that a splendidly far-sighted chap who worked on filling it in (and demolishing the top of the lock walls) 30-plus years ago to build the council yard, carefully re-pointed what was left just in case it was needed again one day.

As Martin Davies from the Canal Society explains, this will link together two lengths of canal which will total around three miles. With the one other lock on this section at Clydach being in considerably better condition (it even boasts one surviving lock gate, which will act as a pattern for replacements), there’s a realistic chance of opening up these three miles from Pontardawe to below Clydach in the not too distant future.

Encouraged by having boated (albeit in shallow craft) on our canal, the following day we complete the towpath wall rebuilding work, make a good start on the second lock chamber wall, and jack several coping stones back into position on the first lock wall, now that we can do so safely with nobody working underneath.

As we drive our minibuses up and down the valley each day between our work site and our accommodation (a Scout hall in Ystradgynlais, not far from the site of the canal’s original upper terminus) we can’t help doing a bit of ‘canal spotting’.

There are visible remains of locks by the roadside at Godre’r-Graig; an empty but impressive aqueduct over the Twrch stream near Ystalyfera; and so on.

Does the society hope to move on to restoring these lengths? Martin’s answer – perhaps surprisingly – is that in fact the missing section from Clydach down into Swansea might see progress first.

The reason for this is the ongoing regeneration of the former Swansea docks, which are being redeveloped with housing, a college campus and more. The plan is that as part of this work, a new lock will be built to the west of the docks to create a connection to the lower length of the River Tawe (which has already been made non-tidal by the creation of a barrage some years ago).

In addition, a new connection is planned to the east of the docks, linking them to the former Tennant Canal – which in turn is proposed for restoration by the Neath & Tennant Canals Preservation Trust to link up with the Neath Canal, also under restoration.

If only a way can be found of bypassing the destroyed lower part of the Swansea Canal and getting to Clydach, the length of canal which includes ‘our’ lock could one day be part of a navigable route combining the Neath, Swansea and Tennant canals.

A possible route for such a bypass has now been identified, making use of the Fendrod stream, the River Tawe, a lake and some new sections of canal. A partnership involving the IWA and all the local canal societies is taking this whole idea for connected waterways forward under the name Swansea Bay Inland Waterway, which we featured in detail in the August 2015 issue of Canal Boat.

If that can be achieved, then it would help make the case for a final extension of the Swansea Canal.

This would involve digging out the half-mile filled in (but unobstructed) length which begins a little way up the valley from our worksite, dealing with a couple of lowered bridges in Pontardawe, linking up with earlier restoration work between there and Ynysmeudwy, and (even if we have to admit that the final length, much of which has disappeared under the main road, is unlikely to be restored) at least getting the canal back as far as Godre’r-Graig.

That would create a connected route totalling 30-plus miles of navigable water: not far short of what the Mon & Brec is now, and we’ve already seen what a success that is.

Our last couple of days on site see the second chamber wall almost finished – all but ‘a Tuesday’s worth of work’ as somebody puts it, referring to the day lost due to bad weather. But as one of SCS’s volunteers remarks, “If it weren’t for the rain, there wouldn’t be any canals”.

The society are delighted with the week’s progress, and their own team will complete the work in the coming weeks. As we pack our tools away, the volunteers head for home, and the minibuses depart for their next tour of duty on another canal, we reflect that there might well be boats through our lock within a few years, and that it might be part of a local network of waterways within somebody’s lifetime – perhaps even mine…