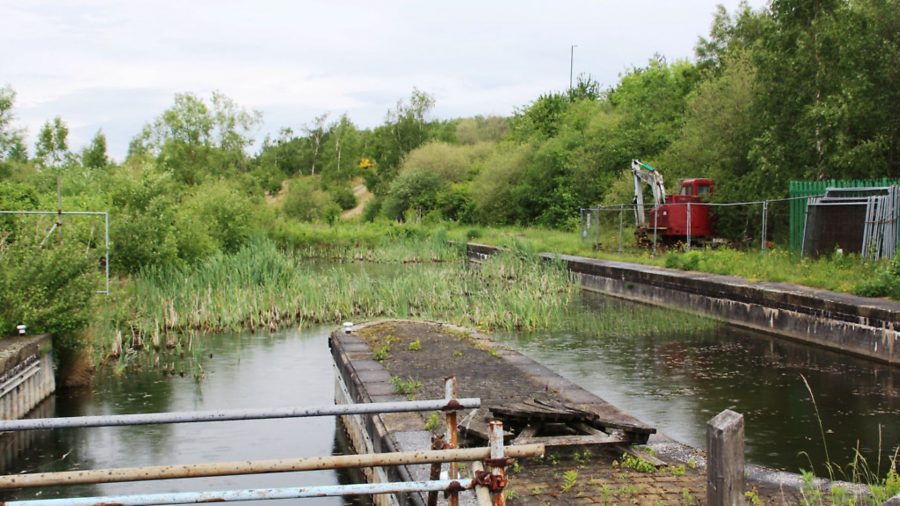 Yes, there are invariably genuinely good reasons for this apparent back-to-front approach to reviving the nation’s heritage. It could be to do with fixing the ‘easy bits’ first where there are fewer major obstructions and volunteers can do the job; working in areas which qualify for regeneration or heritage funding; forming partnerships with the more amenable local authorities along the route; or simply bypassing an uncooperative landowner. But that doesn’t make it any less annoying.

So it comes as a pleasant change to be able to write about a length, albeit a short one, which could see visitors from the national network in just a few years. And that’s especially true given that the Cromford has until now sometimes seemed to be rather a case of working almost everywhere other than at the point of contact with the navigable network at Langley Mill, meeting point with the Erewash Canal.

But before we head for Langley Mill, let’s look at what’s been done elsewhere on the route to date. And to get our bearings, we’ll start with a brief description of the route, and what happened after it fell derelict.

Opened in 1794, the Cromford Canal headed north from Langley Mill (junction with both the Erewash and Nottingham canals), climbing gently up the Erewash Valley via a spread-out series of locks. At Jacksdale the climb steepened as the seven-lock Ironville flight lifted the canal almost 40 feet to its summit level, turning westward to follow a side valley past Codnor Park Reservoir, where a branch led off across the dam to follow the upper Erewash valley to Pinxton.

Piercing the high ground north of Ripley via the 3063-yard Butterley Tunnel, the canal entered the Amber Valley, crossed it on an embankment and series of aqueducts at Bullbridge, then contined west to reach the Derwent Valley. Turning north west, the canal remained on the same level as it followed this valley, crossing the River Derwent on Lea Wood Aqueduct, to reach its terminus alongside Arkwright’s mills at Cromford – now a World Heritage Site.

So geographically the canal divides neatly into three sections: north up the Erewash valley, west along the central section, and northwest up the Derwent Valley. And the three lengths have fared rather differently since it closed.

The first length in the Erewash valley has largely disappeared, although few serious blockages stand in the way of reinstatement, and most of the route is farmland and nature reserves. The central section is going to be the difficult length: not only is the tunnel in a bad way thanks to mining subsidence, but two spans of the series of aqueducts (those crossing a main road and a main railway line) have gone, while flood prevention works have damaged the top end of the flight of locks. But on the plus side, many of the remaining locks are in restorable condition. Finally the third section in the Derwent Valley survived largely in good condition, so it is not surprising (if not ideal, as per my introduction) that this was seen as the place to begin restoration.

The original Cromford Canal Society reopened the northern end during the 1970s, set up a trip-boat operation, and aimed to extend southwards. Sadly following practical problems and internal disagreements the work came to an end and the group ceased to exist, but in the meantime the restored length has been kept as a nature reserve and in recent years today’s restoration group, the Friends of the Cromford Canal (founded in 2002) has begun operating a trip-boat again on the Cromford end, while a dredging programme (largely for wildlife benefit) has kept the channel clear.

At the same time, FCC hasn’t forgotten other lengths of the canal. At Sawmills, near Ambergate, are the remains of a toll narrows. This historic structure consists of a stone-lined section of channel a little wider than 7ft (the canal’s maximum width was 14ft up to Butterley, but the tunnel and lengths beyond were narrow-beam) and around 70ft long, where boats would stop to be ‘gauged’ – their depth measured, the weight of the cargo calculated, and the tonnage tolls charged accordingly by a toll-keeper. Several years ago one side was rebuilt with support from Waterway Recovery Group volunteers, and more recently the ‘WRGies’ have returned to temporarily divert the towpath so that the other side can be rebuilt.

Meanwhile at Ironville, initial investigation and clearance works (also with WRG support) have taken place on the locks. And in a long-running saga, the Friends put a lot of effort into trying to get agreement for some reinstatement of the Pinxton Arm following opencast mining – so far to no avail.

But as FCC’s George Rogers puts it, there hasn’t so far been any of what he calls ‘major work’ on the ground by the Friends – until now.

I’m at Langley Mill, and George is showing me around the site that not only will mark the first such major work, but also FCC’s first steps towards putting the canal back on the national navigable waterways map.

Having said that, while we’re at Langley Mill we must mention yet another group – the Erewash Canal Preservation and Development Association, who technically carried out the very first piece of restoration work on the Cromford, even though it isn’t often seen that way. Following the decline and threat of abandonment of the Erewash in the 1960s, ECPDA campaigned to save the canal. As its original terminal basin just below Langley Mill had been infilled, their volunteers restored the first lock and basin of the Cromford Canal at Langley Mill to serve as today’s Erewash Canal terminus – and have subsequently extended it into the canal centre that it is today.

As we walk north from Langley Mill we reach the end of the basin – but not quite the end of the channel. Some years ago ECPDA volunteers rebuilt the next section of about 100 metres: it’s dammed off from the navigable length, but it stands there empty as a statement of intent to continue northwards.

Continuing past the end of that section, traces of the canal cease, the site becomes overgrown by vegetation and small trees, and the route is gradually obstructed by a high embankment as the A610 Langley Mill bypass converges from the right. But in fact this isn’t the main embankment, it’s a former slip-road used during road construction, and is now unused. We scramble up to the top of it, and George explains the plan to dig it out and build a new two-rise set of staircase locks on the site, to replace two original locks which have disappeared (one is buried under the A610).

Beyond the old slip-road embankment we can see the main embankment carrying the A610, and it crosses an unused bridge. This once carried it over a railway siding serving a colliery, which closed down within a couple of years of the road opening in the 1980s. Very conveniently, the bridge is big enough for a canal channel, even though it’s at a bit of an awkward angle so a couple of tight turns will be needed, and the ground level under it will need to be raised to match the new canal level above the locks (using the material dug out from the old slip-road embankment).

Beyond the bridge the second tight turn will see the new channel turn sharp left to run alongside the road embankment as it heads back towards the original canal route. But the land is currently not publicly accessible, so we retrace our steps to Langley Mill, drive round to Stoney Lane, a minor dead-end leading west from Brinsley Village, and find ourselves about 500 metres further north, where the plan is that this initial restored length will end at a new winding hole. From here, a public footpath continues northwards: it’s the old towpath, and in fact the canal is walkable pretty much all the way from here to Cromford. There’s little sign of the former channel, but anyway the two new locks mean that the restored route will be at a slightly higher level and therefore slightly further up the valley side – which is no bad thing, as it keeps it away from the more sensitive part of a wetland nature reserve in the valley bottom.

From the current limit of navigation at Langley Mill to here is roughly 1km, and this will form FCC’s first major restoration project and its link to the outside world. A planning application has been submitted (the Friends are dealing with issues with the Environment Agency and wildlife trusts, but don’t believe there are any show-stoppers), there have been positive discussions with landowners (helped by CRT already owning part of the land) and work could start soon.

Splitting it into three – Phase 1: the channel as far as the locks; Phase 2: the channel beyond the A610; Phase 3: the locks and bridge – will see the ‘easy’ bits more suited to volunteers being tackled first. George believes FCC has the resources to deal with phases 1 and 2, while sourcing funds for phase 3. All being well, it could be done in as little as around five years.

And then what? The next section north will need some kind of crossing for Stoney Lane, more new channel beyond, more new locks to replace the next four which have also disappeared, and an embankment to take the canal across the valley to reach the start of the Ironville flight. And in the meantime FCC is looking at plans for the Pinxton Arm and the length from Ironville to Butterley.

For the long term, there remain two big issues: Butterley Tunnel (where a report some years ago suggested that the most practicable solution might involve either a new tunnel or a new route over the top, as alternatives to rebuilding the original) and the Bullbridge aqueducts (complicated by the possible electrification of the railway, where clearance would already be tight) – not to mention the need for careful discussions with wildlife bodies about any more navigation on the northern end.

So clearly we aren’t likely to be cruising into Cromford from the main network any time soon. But there does look to be every chance that we could be cruising onto the first short section of it in the not-too-distant future. And that would be a big step forward for the Cromford.