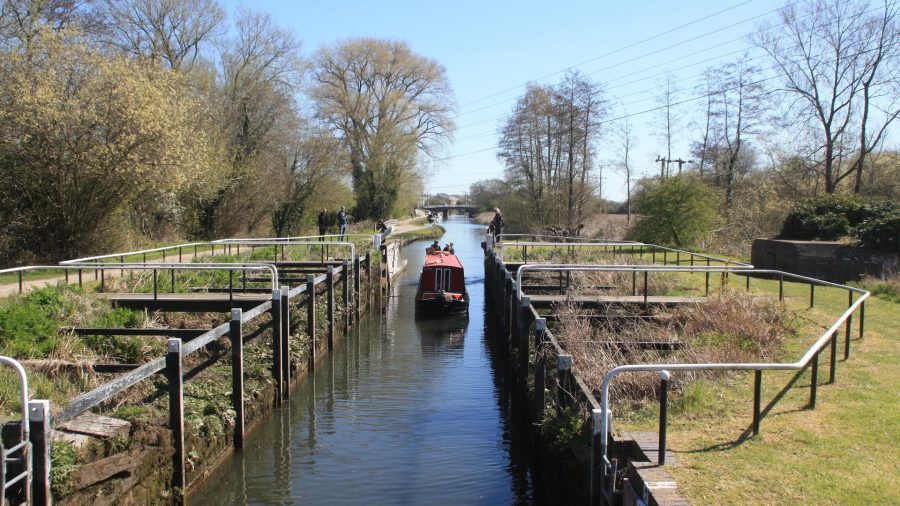 Locks haven’t always been built with vertical brick or stone walls. Martin Ludgate seeks out some survivors from the days when sloping earth banks were common

Sometime in the 1980s, in one of my earlier forays ‘off the beaten track’ away from the main canal system, I ventured onto the Kennet & Avon – or to be more accurate, the River Kennet Navigation, from Reading. It seemed slightly adventurous at the time: the waterway was still under restoration with reopening through to Newbury, Bath and Bristol some years away yet, with an out-of-date canal guide we weren’t sure how far we’d get, and once we’d passed the smart Blakes Lock (run by the River Thames authorities), the waterway was rather unkempt. Leaving Reading behind, we reached Garston Lock – and were slightly surprised to find that instead of the usual two vertical brick chamber walls, it had sloping sides covered in vegetation, which disappeared underwater as the lock filled up. We had found the last turf-sided lock in regular use on the network.

An aside: ‘turf’ seems a bit of a misnomer – it might conjure up visions of neatly manicured sloping lawns leading down to the water’s edge, but in truth they’d often be better described as ‘scrub-sided’ with some pretty luxuriant vegetation taking advantage of the damp soil.

When the Kennet was first made navigable in the early 18th century, all the locks between Reading and Newbury were turf-sided. This was common on river navigations at the time: it was cheaper and easier to just build short lengths of full height masonry (or timber) vertical walls to support the lock gates at the top and bottom ends of the lock, and leave the rest as a sloping earth bank (supported by a low brick or timber wall at the bottom), where grass and other plants would bind the soil together. Sure, it increased the amount of water it took to fill the lock, and it would be more prone to leakage, but on a river navigation there was far less likely to be any issue with water shortage than on a canal.

And yes, the extra water would make it slower to fill and empty, but did that matter in those early days when there wasn’t much else competing with water transport? And then there was the possibility of boats getting grounded on the sloping banks as the lock emptied – but if the boats were the full size of the lock (as working boats often were), they would be held in place by the walls at the top and bottom ends of the chamber. And if necessary, vertical wooden or metal guide posts could be added to keep boats in the right place: on the Kennet, old rails from the canal’s later owner the Great Western Railway, of a type known as ‘bridge rail’, were subsequently added in the 19th century.

But turf locks did need more maintenance, and over the years many were gradually rebuilt as conventional chambers (for example all the turf locks on the River Stort were rebuilt in brick), with just a few surviving on quiet backwaters such as the Kennet. And at the time of our trip, Garston was the only remaining turf lock on the short surviving length at the Reading end which had remained navigable when most of the Kennet & Avon route had fallen into dereliction. Several more survived in an unnavigable state on the length to Newbury – and the prospect of restoration led to some differences of opinion on how to deal with them. Should they be rebuilt as conventional locks, for safety and ease of use and maintenance, or kept turf-sided on heritage grounds? In general the former view prevailed, but Garston Lock was kept turf-sided as it was already navigable, and a second one, Monkey Marth near Thatcham, was rebuilt as a turf lock.

So now there are two turf locks in regular use on the network. But they aren’t the only two for the waterways heritage spotter to look out for. Firstly, there are reminders of former turf locks in the form of a couple more locks on the Kennet (Sheffield and Aldermaston) where the chambers were rebuilt, but retain the scalloped edges (which were a feature of many of the turf locks) as a heritage feature – and at Aldermaston, sloping lines of bricks set in the chamber walls show where the original masonry used to end and the earth banks began. There are also examples on the Kennet where the locks were rebuilt but in a slightly different location from the old lock – and you can still see the remains of one or both sides of the former turf chamber a few yards downstream of the modern lock. Burghfield and Towney locks are examples of this.

And the Kennet isn’t the only river where they’re to be found. Another Thames tributary, the River Wey, was also mostly equipped with turf locks when it was made navigable in th 17th century. All of the ‘normal’ locks on the river were rebuilt as masonry or concrete chambers during the 20th century – I recall the last one at New Haw still being turf-sided on just one side as late as 1985 (see picture) – but there remains a turf-sided flood lock used only when river levels are high or need to be controlled. It’s known as Waltham Gates, and besides its turf sides it has a few other oddities to look out for. Firstly, the gates are fitted with round balance beams (these are said to have been made from old telegraph poles); secondly, it’s on a slight curve with the upper and lower gates not quite in

alignment with each other; and finally the paddles lack any gearing or mechanism, the paddle rod being raised bodily and held up with a bar through a hole (a system once in general use on Wey locks – when JB Dashwood passed on the way to his celebrated journey through the Wey & Arun Canal just a few years before it closed, as recounted in the early travelogue From the Thames to the Solent by Canal and Sea (1868), he was distinctly unimpressed by their inconvenience).

So that’s dealt with all the surviving examples of turf-sided locks on the current navigable network. But there are more to be found if, like me, you enjoy exploring waterways which have been abandoned (or in some cases are under restoration). We’ve just mentioned the Wey & Arun Canal, and it features a restored turf lock. It’s on a length at the southern end of the canal, which historically was built slightly earlier as a separate waterway called the Arun Navigation, although this length is still very much a parallel canal rather than a river-based waterway. At Orfold, it crosses the Arun on an aqueduct, descends through Lordings Lock, and then crosses (on the level) a flood channel of the river, before passing through a shallow turf-sided flood lock which will stop flood water from entering the final length from there to where the canal ends at Pallingham Quay. The flood lock has been restored, so has the aqueduct, and with the Wey & Arun Canal Trust starting work on Lordings Lock, there are prospects of some local boating in this area in advance of the eventual reopening of the entire canal to through navigation.

Still in the south of England, another waterway with turf locks, but in this case with no active proposals for reopening to navigation (although there has been work to restore the towpath and provide interpretation) is the River Itchen which once linked Winchester to Southampton. All the locks were turf-sided; one was rebuilt as a conventional lock but the rest remain in varying states of dereliction, some converted to weirs or sluices, and in several cases (especially if you visit in winter or early spring before the vegetation gets too luxuriant) it’s still just about possible to see their construction. Even if the prospect of looking at sloping muddy banks doesn’t fill you with enthusiasm, the whole route is a splendid day’s walk, and you can catch a train back at the end of it – we covered it in our April 2019 issue.

Finally, heading away from the South and out eastwards this time, another waterway that’s under restoration is Suffolk’s River Gipping, also known as the Ipswich & Stowmarket Navigation. Construction work began in 1790 at both ends of the river-based navigation, but soon encountered problems as a result of faulty surveying and poor workmanship. Engineer John Rennie (who seems to have been something of a ‘Mr Fixit’ in cases like this) was called in for his expertise: he noted that the top three locks from Stowmarket downstream had been built in turf and timber, whereas he recommended brick and stone.

His advice was taken for the remaining locks, but the three locks already built remained turf-sided. The River Gipping Trust’s restoration has been centred around Needham Market and Baylham near the mid-point of the waterway, and hasn’t reached these three locks yet. They have, over the years since the waterway went out of use, been modified to act as weir or sluice structures for water control. But the middle one, Badley Lock, is accessible by footpath (as is the entire navigation – it’s another good day’s hike and train ride back) and its turf-sided construction can clearly be seen, with slate slabs now laid on the sloping banks presumably to stabilise them.

And one day, perhaps RGT’s restoration plans will see boats using it again