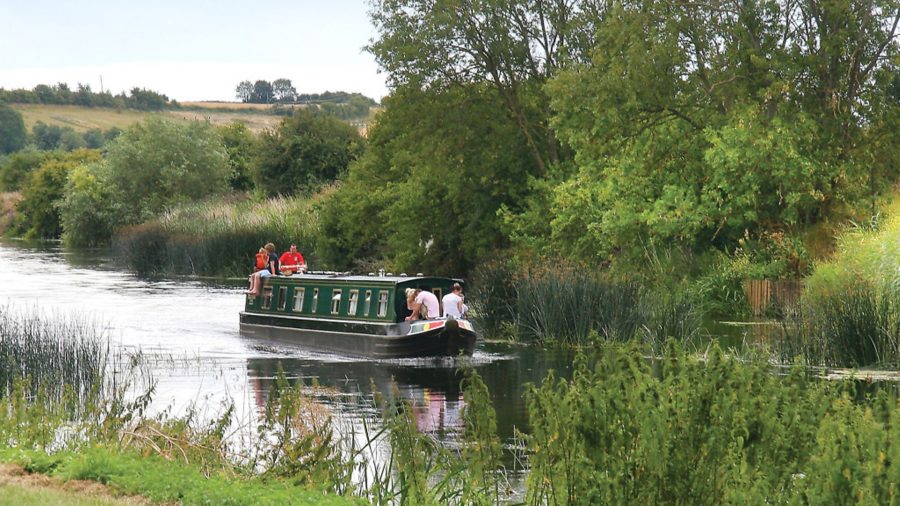 We follow 37 miles of the River Avon as it flows down from Warwickshire into Worcestershire, passing Mediaeval abbeys and bridges, glorious countryside, and historic Stratford-upon-Avon

“A river is more than an amenity, it is a treasure.” – Oliver Wendell Holmes

The name ‘Avon’ is a Celtic word meaning ‘river’. Look at a map of Wales, and you see that the river names begin with the modern Welsh word ‘Afon’ – and the Warwickshire Avon is by no means the only River Avon in England. It rises at Naseby, not far from the end of the Welford Arm on the Grand Union Canal’s Leicester Line, then it flows through Rugby and Warwick but only becomes fully navigable two miles above Stratford-on-Avon.

The river has been used for trade since mediaeval times, but by the end of the 19th century the navigation had deteriorated after being bought by the railway. Only the lower river between Evesham and Tewkesbury remained in use, and by the mid 1940s this section was almost derelict as well. The Lower Avon Navigation Trust was formed in 1950 and work began to restore the navigation which was finally reopened in 1962.

Then the Upper Avon Navigation Trust was formed under David Hutchings in 1965 and thanks to generous private funding and volunteer labour the Upper Avon was restored through to Stratford and opened by the Queen Mother in 1974. Along with the restored Southern Stratford Canal, this completed the Avon Ring cruising circuit enjoyed by so many boaters today.

Since then, the Stratford & Warwick Waterways Trust has pushed for the Avon Navigation to be extended further up-river, and who knows, boats may one day reach Warwick and link with the Grand Union Canal. But for now, smaller boats can navigate up the river as far as Alveston (exactly how far below it depends on the water depth and the boat’s draught), while for larger craft it is navigable for around 47 miles from Stratford to Tewkesbury where it joins the River Severn.

We begin this journey at Bancroft Basin where the Stratford-on-Avon Canal meets the River Avon. This is close to the town centre with all its famous sights attracting visitors from all over the world. The basin, full of colourful moored boats, is overlooked by the Gower Memorial statue of William Shakespeare surrounded by several characters from his plays. Shakespeare’s Birthplace is nearby in Henley Street and the Butterfly Farm can be seen across the river at Tramway Bridge (which used to carry an early horse railway).

Before leaving the basin, boaters arriving from the canal will need a cruising licence for the River Avon (an independent navigation run by the Avon Navigation Trust), obtainable from the Waterways Information Centre.

After leaving the wide lock we turn right onto the river. It is possible The river is bustling with trip boats and rowing boats, everyone enjoying the famous view of the Royal Shakespeare Theatre and the Holy Trinity Church where Shakespeare is buried.

Leaving Stratford, the first stop is the Colin P. Witter Lock with its overhead girder supports (added to hold the sides apart in soft ground) making it arguably one of the ugliest locks on the entire waterway system. Nevertheless, this was the location where the Queen Mother officially declared the restoration of the waterway in 1974.

“The meadows which the youthful Shakespeare knew are left behind, and, sliding into view, comes reaches of the Avon, mile on mile”

These are the words of poet John Betjeman that perfectly sums up the next few miles of waterway once the environs of Stratford are left behind. Two miles of open countryside lead to the Stan Clover Lock by the village of Luddington. This is one of many ‘sponsored’ locks (named after benefactors who supported the building of the new locks needed during the restoration) which you will encounter on the Upper Avon section. Afterwards the river bends around Welford-on-Avon to the many arched Binton Bridges where there is a welcome waterside pub.

After a lock at Welford the river winds through open countryside for two miles to another lock at Barton which has a waterside pub and moorings. Then comes the town of Bidford-on-Avon with its lovely mediaeval bridge, lots of shops, pubs and an excellent bakery. The bridge has seven arches but only one is navigable – indicated by a prominent arrow.

After Bidford a beautiful reach of the river is overlooked by the towering wooded slopes of Cleeve Hill. A sharp bend at Marcliff leads to a lock named after the Inland Waterways Association. This is followed by another delightful section leading to Robert Aickman Lock – named after one of the founders of the IWA. A mile further on is George Billington Lock which has a pub nearby.

A long looping bend takes the waterway past Offenham and then enters Evesham passing beneath railway and by-pass bridges. You are now cruising on the Lower Avon Navigation, although since the merger of the Upper Avon and Lower Avon navigation trusts some years ago this makes little difference.

Evesham Marina with facilities for visiting boats is just before Evesham Lock which features an unusual ‘A-frame’ lock house. There are usually moorings available near Workman Bridge, which is useful as there is a lot to see in Evesham including Abbey Park (see inset)

Leaving Evesham look for the Hampton chain ferry: the chain will be lowered when the ferryman is made aware of an approaching boat. Now the river winds past wooded hills and valleys where farms produce the fruit which makes this region famous. Above the treetops before Chadbury Lock is Leicester Tower, a memorial to Simon de Montfort, Earl of Leicester who was killed at the Battle of Evesham in 1265 and is buried in Abbey Park, Evesham.

After Chadbury Lock the navigation twists and turns through beautiful countryside to Fladbury. There is a popular canoeing centre here so boaters should watch out for youthful crews swinging across the navigation channel. Then comes Fladbury Lock followed by the handsome Cropthorne Mill which stands next to a weir. Fladbury is an interesting village with good pubs but mooring can be difficult. Jubilee Bridge at Fladbury is the last road crossing of the river until Pershore, more than five miles away. It is also four miles before the next lock at Wyre so sit back and enjoy the open Worcestershire landscape.

Wyre Lock has an unusual diamond shape similar to some on the South Oxford Canal. Then comes Pershore Lock, about a mile further on, heralding the approach to the attractive town of Pershore. The town’s old bridge dates back to the 14th century and was almost destroyed by the Royalist Army retreating from the Battle of Worcester during the Civil War. In 1926 the bridge was taken out of service for road traffic and is now used only as a footbridge, while a new bridge that carries the town’s main traffic is nearby.

Don’t miss Pershore Abbey with its lovely gardens just a short walk from the riverbank. Once one of the largest medieval abbeys in Britain, it was mostly destroyed in the Reformation but was rebuilt in the 19th century saving some of its original Norman features.

Pershore has lots of pubs and shops in and around its main street and waterside near the lock.

Leaving Pershore, another six miles of river flow through open countryside before the next road crossing at Eckington Bridge. The river takes a series of wide curves, and one tight bend at a place known as the Swan’s Neck. Each bend offers new views especially towards Bredon Hill which inspired A.E.Housman in his poem In Summertime on Bredon. Author John Henry Garrett in his 1906 book The Idyllic Avon describes this section of river in some detail with frequent references to Bredon Hill. If he could return today he probably wouldn’t be too disappointed by what he might see.

At Comberton Quay you can visit the village of Great Comberton and take a footpath to Bredon Hill. On a fine day the views from the top are breathtaking and well worth the climb.

Nafford Lock is beautifully situated with high hills on one side and rolling meadowland on the other. Boaters must move a swing footbridge before entering the lock and remember to replace it afterwards.

Then comes the red sandstone Eckington Bridge first built in 1440 and then replaced in the 1720’s. It has six arches and was the subject of a poem by Arthur Quiller-Couch.

At Strensham Lock the peace and quiet of the countryside is now interrupted by the noise of the M5 motorway. The navigation passes beneath the motorway about two miles further on at Bredon village. Unfortunately, mooring is difficult at Bredon which is a shame as it has some interesting features such as a National Trust tithe barn. Twyning village comes next after the motorway bridge.

According to Mr Garrett’s book the section of river between Twyning and Tewkesbury and was once the playground of ‘smart people from Cheltenham’ who boated the two and a half miles from Tewkesbury to the Ferry Inn at Twyning where they ‘regaled themselves with tea’. The Ferry Inn still occupies a prominent position at Twyning riverside where today’s boaters can enjoy a drink and a meal.

Continuing the journey after a couple of miles you will see the large expanse of Tewkesbury Marina which has recently been refurbished and is celebrating its 50th anniversary. Afterwards you will enter the town of Tewkesbury with its Norman Abbey built in the 12th century and rich in history.

The ancient King John’s Bridge is the only road crossing in the town and afterwards on the right you will see the entrance to Avon Lock which leads out to the River Severn Navigation. But first, there is lots to see in Tewkesbury so moor up and enjoy exploring this lovely old town. The river channel continues ahead past the lock entrance, forming a navigable dead-end known as the Mill Avon (well named for this length was once lined with flour and textile mills), where the town has a beautiful waterfront with its flower covered Abbey Mill bridge marking the end of navigation.

• Shakespeare’s Birthplace: One of Stratford-upon-Avon’s most popular attractions, this half-timbered 16th century town house has been preserved as a museum portraying family life in William Shakespeare’s day, including his father John Shakespeare’s glove workshop and a walled garden planted with appropriate herbs and flowers.

• Tewkesbury Abbey: Properly known as the Abbey Church of St Mary the Virgin, the present building dates from the 12th Century and is one of the finest examples of Norman architecture in the country, with a fine Romanesque tower and more Mediaeval monuments than any church other than Westminster Abbey.

• Abbey Gardens Evesham: Abbey Park, once the site of a Benedictine Abbey dissolved in the 16th Century, is dominated by the handsome gatehouse with bell tower. The park overlooks the river, and the Almonry which has a museum is nearby.