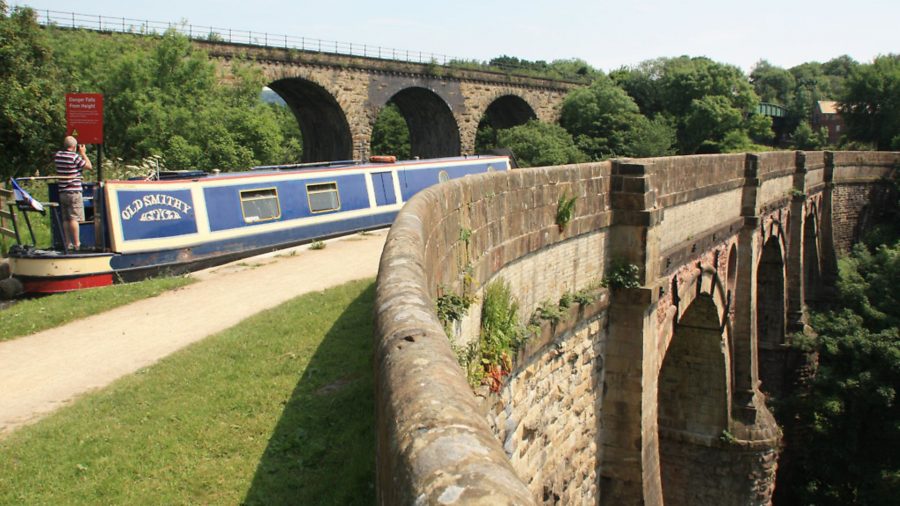 One end is in rural Derbyshire, the other in the heart of Manchester, but both canals form a vital link in the Cheshire Ring – and some attractive cruising too

There’s a sharp contrast between the two ends of the Peak Forest Canal. At the north end, Dukinfield Junction is set in formerly industrial surroundings on the edge of the Manchester conurbation, with the Ashton Canal beginning its descent into the city centre. Meanwhile at the south end, the two branches of the Peak Forest both end at terminal basins on the fringes of the Peak District, with old horse-tramways leading off into the hills.

But we aren’t going to start at any of these points: instead, we’ll begin our journey near the mid-point of the 14-mile canal, at Marple Junction. Why? Firstly because that’s where we ended our guide to the Macclesfield Canal last month; secondly because it’s where many boaters will arrive on the Peak Forest, especially if they’re exploring the Cheshire Ring.

Although it’s possible to cruise the Ring’s 97 miles and 92 locks in a week, allowing yourself a little longer means that you can explore the neighbouring waterways – in which case the Upper Peak Forest heading south eastwards from Marple is one not to be missed. So we’ll begin our cruise by emerging from the last of the Macclesfield’s famous ‘snake’ towpath turnover bridges and turn sharp right.

Leaving Marple Top Lock behind us, the canal soon leaves Marple behind and heads out into the countryside, following a contour high on the side of the Goyt Valley, some 250 feet above the river. It isn’t long before the canal passes the first of a series of opening bridges, something of a Peak Forest feature. Originally they were swingbridges, but a couple were converted to liftbridges in recent decades. A second liftbridge follows shortly, followed by one that has remained a swingbridge. You will need some combination of a lock windlass, the CRT ‘Watermate’ sanitary station key, and the T-handle anti-vandal key (also known as a handcuff key) to operate these bridges – best to take all three with you…

The canal continues to wind along the attractive valley side, accompanied now by a railway line not far away – in fact for a mile or so, the complex history of railway companies has left us with no fewer than three parallel railways running through the Goyt Valley, all still in use by passenger trains.

New Mills is, as you might expect, a mill town – and a fine stone mill building stands alongside the canal. The town centre, with useful shops, is on the far side of the valley but easily accessed from Bridge 28, where there is also a boatyard.

The River Goyt, which was way below us at Marple, is now approaching the same level as the canal as it nears its southern terminus, passing through Furness Vale (with another boatyard) to reach a junction. Continuing straight ahead, the canal enters Whaley Bridge, a stone-built town on the edge of the Peak District and surrounded by hills. A stone warehouse built over the very end of the canal enabled cargoes to be transhipped to railway wagons for the journey along the former Cromford & High Peak Railway. This early horse tramway, opened in 1831 to link the Peak Forest and Cromford canals, was built more like a canal than a conventional railway, with a winding route which followed the contours, and rope-worked inclines to carry it up and over the high ground of the Peak District. Today, the first length at Whaley Bridge and longer sections further south can be walked.

Returning to the junction, don’t miss a trip to the canal’s other southern terminus, at Bugsworth (or Buxworth as the village is more politely known these days). This basin complex (see inset) connected the canal to another horse tramway, which linked it to the limestone quarries of the Peak Forest area of the Peak District (hence the canal’s name) and provided it with its most important cargo.

Returning to Marple, we’ll now take the other direction from the junction, heading northwards along the length of the canal which forms part of the Cheshire Ring. But before setting off, now is a good time to visit Marple: even though the closest approach to the town centre and shops is a little further north at Bridge 18, that would mean stopping quarter of the way through one of the canal’s two major engineering features – the mighty flight of 16 locks.

Built out of massive stone blocks, the locks are some of the deepest on the narrow canal network, averaging out at around 13ft each: to put that in context, these 16 chambers lower the canal almost as far as the much longer Tardebigge flight of 30 locks on the Worcester & Birmingham. The cost of building them delayed completion until 1804, four years after the rest of the canal, during which time yet another horse tramway linked the two halves of the incomplete waterway (the canal’s engineer Benjamin Outram was so keen on them that it’s been – completely erroneously – suggested that ‘tram’ was a contraction of ‘Outram’), and they were one of the challenges facing the canal’s restorers after the Lower Peak Forest and Ashton canals fell derelict in the early 1960s.

The upper locks are in an urban setting, with houses backing onto the locks (and onto the offside extensions added to offset the short length of some of the intermediate pounds). But as the canal descends towards the Goyt, the surroundings become more wooded, to the point that it’s not at all obvious that the canal is carried on a major embankment pierced by a railway tunnel at one point.

Despite dropping more than 200ft, the canal is still 100ft above the river – as becomes obvious when it turns a bend after the bottom lock, passes under a railway, and launches out onto the second of its major engineering features. The tremendous three-arch stone-built Marple Aqueduct has had its problems over the years – from an emergency repair involving metal plates and bolts in the 1860s to a threat of demolition following frost damage 100 years later. But recent restoration, removal of vegetation and construction of access paths and steps have returned it to its original splendour, so that once again, as an 1830s visitor remarked…

From the top of this magnificent aqueduct, the beholder gazes with fearful astonishment on the river pouring beneath over its rocky bed.

Paralleled by an even higher railway viaduct, the aqueduct leads straight into a narrow and gloomy cutting which is all that remains of the former Rose Hill Tunnel. A wooded length beyond leads to another tunnel which still survives: the 308-yard bore Hyde Bank might look wide enough for two boats to pass, but isn’t – so make sure it’s clear. There’s no towpath, but walkers can follow the path over the top – if you’re heading north, bear left where the path splits; if you’re going south, take the right fork where it splits.

The canal is now within the eastern fringes of the Manchester conurbation as it passes through Romiley and Woodley, but this isn’t at all obvious as it passes through secluded wooded cuttings for much of the way. A second tunnel at Woodley does have a towpath; its roof dips down noticeably once you’re underground, so take chimneys and anything else off the roof first.

The remaining length of the canal runs alongside the River Tame, with some surprisingly rural lengths including the Haughton Dale Nature Reserve. But once the canal reaches Hyde there’s no disguising the fact that it’s passing through an urban area, although a couple of historic canal warehouses add interest, and there are handy shops.

The final section was once heavily industrial, but is now increasingly green and pleasant as it approaches the sturdy Tame Aqueduct, the useful Portland Basin marina, and the junction with the Ashton Canal with its industrial museum (see inset).

This area was the main site of the ‘Ashtac’ big dig of 1972, a major volunteer working party which launched the Cheshire Ring restoration. How many of those 1000 volunteers would have thought that not only would the Ashton and Lower Peak Forest canals be restored, but also the third arm of the junction, fulfilling the ‘impossible dream’ of reopening the Huddersfield Canal.

If the northern length of Peak Forest Canal managed to hide its urban surroundings quite well, the Ashton makes no such pretence at being anything other than a largely urban and industrial waterway, as its six miles opened in 1796 descend through east Manchester’s suburbs.

It isn’t without its interest, though, beginning with some fine old mill buildings plus more modern industries, various accompanying railway tracks, and a boatyard specialising in wooden craft, as it makes its way westwards to Fairfield.

This was the junction for the first of several branches (which between them added up to considerably more than the length of the main line). The first short section of the Hollinwood Branch has been restored and turned into a marina, a restoration group would like to open more of the branch, and (with a certain amount of deviation around missing lengths) it’s possible to explore the line through to the splendid Daisy Nook Country Park and beyond.

Back on the main line, two locks (formerly duplicated) begin the steep descent into Manchester as the canal passes through a mainly residential area. Surroundings become industrial again as the Clayton flight of nine locks follows – look out on the south side for the start of the Stockport Branch, another abandoned arm that’s proposed for restoration, and in the meantime can be explored on foot for much of the way.

Industry and housing are briefly left behind as the canal passes Sport City, site of the 2002 Commonwealth Games, which now incorporates the Manchester City football ground and the National Cycling Centre. It was created on a former colliery site, and you can tell from the huge variation in the height of the four Beswick Locks that mining subsidence has affected the levels over the years.

Old pictures of the final length through Ancoats show an LS Lowry style landscape of mill chimneys: there are fewer today, but a fair number survive and have found new uses. Alongside them in recent years, some striking new buildings have been created – including one called ‘Chips’ because its design was inspired by some French fries on a plate. You’ll either love them or hate them, but you certainly can’t ignore them. Through the middle runs the canal, passing through its final three locks (complete with surviving cottages).

The modern (if rather less unconventional) Piccadilly Village housing development surrounds the last few hundred yards as the canal crosses Store Street Aqueduct, turns sharp right, passes under the last bridge and meets the Rochdale Canal at Dale Street Basin. Turn right to cross the Pennines on another restored route; left to descend into the dark cavern of the Piccadilly Undercroft, with a lock completely hidden under 1970s buildings; or moor up here, explore the city centre, and reflect on how far you’ve come from the hills of Whaley Bridge and Bugsworth.