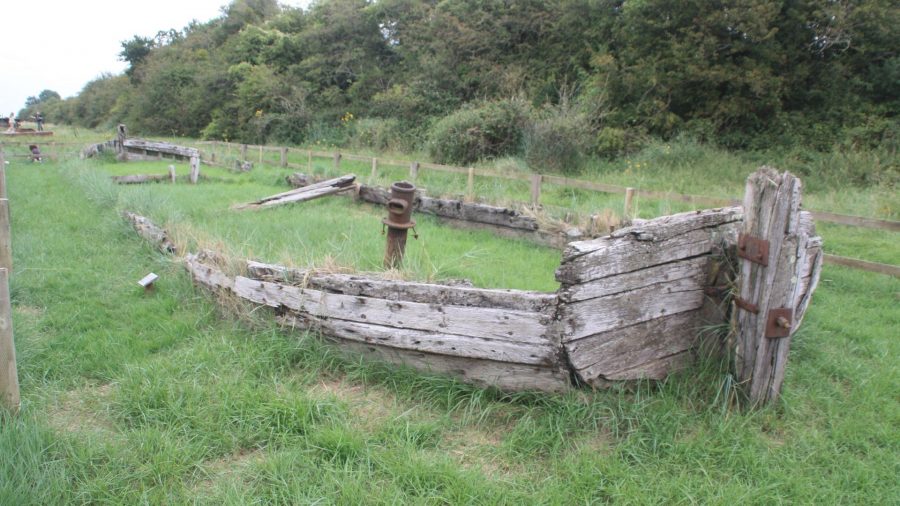 From the towpath of the Gloucester & Sharpness Canal, a footpath leads to a ships’ graveyard of old vessels. What’s their story?

Take a walk along the towpath from Sharpness Docks towards Purton at the south west end of the Gloucester & Sharpness Canal, the subject of our Cruise Guide article. A few hundred yards beyond the stone tower that marks the site of the ill-fated Severn Railway Bridge (wrecked in the 1960 disaster when two loaded tanker barges collided in thick fog, struck the bridge and caught fire, and five men lost their lives), you’ll see a footpath leading off to your left, away from the canal. Take this path for a few yards as it cuts through the towpath hedge, follow it as it emerges close to the foreshore of the Severn Estuary and bears right, and you’ll come across a the remains of an old wooden barge, half buried in the silt of ages.

This is the Harriett, and is one of the better-preserved of the Purton Hulks: originally an attempt to protect the canal; now a set of fascinating relics which despite their advanced state of decay are still a valuable resource for the maritime historian. So how did they come to be there?

The clue is the proximity of the canal to the estuary for this final mile or so from west of Purton to Sharpness – and the big tidal range and strong currents that the Severn is famous for. The threat of a breach to the canal banks was brought home one night in 1909 when 60 yards of the foreshore were washed away in a landslip. The immediate response was to protect the canal by beaching a small number of old redundant timber lighters on the foreshore at high water, breaking holes in their hulls to allow water in, and allowing them to gradually fill with silt, building up the strength of the bank.

For almost 60 years until 1965 many more vessels were added – sometimes piled on top of existing hulks – until their numbers totalled not far short of 100 craft. There were old barges, trows and lighters, as well as schooners originating from England, Scotland, Ireland and Wales. Most were wooden, but there were a few metal hulls and even some concrete barges dating from the Second World War when wood and steel were in short supply (and which were also used as part of the ‘Mulberry Harbour’ floating temporary ports created for the D-day landings). Between them they form the largest ships’ graveyard in Britain.

Over the years it was gradually realised that these abandoned hulks had considerable historic interest – in some cases they are the only survivors of their type. After decades of decay they would never float again – even extracting them from the foreshore for preservation wouldn’t be an option – but left where they were, they were falling further into dereliction, unfortunately suffering vandalism at the hands of people helping themselves to a bit of marine history, and had little legal protection.

In the interest of at least recording what was there before it was too late, in 1999 maritime historian Paul Barnett began a research project which recorded 86 vessels; in 2008 the Nautical Archaeology Society investigated the site; in 2010 the then British Waterways took control of the site to try to protect it. The Friends of Purton was formed and actively engaged in a systematic programme of archaeological surveying, photography and meticulous recording of each vessel for posterity. The Friends are also keen to promote the collection as a site of regional, national and international importance, which can be enjoyed by both the local community and the worldwide academic fraternity (through its online records).

As an example of the history still surviving in those decayed wooden remnants, take the first boat we mentioned above, the Harriett. Firstly, which boat was it? There was a Gloucester trow named Harriet, and also a ‘wych barge’ (Droitwich built trow) of the same name. But this was ‘Harriett’ with a double ‘t’, which (along with details of construction, and records of the demise of the other two craft) identified this as the last surviving ‘Kennet barge’, 72ft by 14ft 1in and built at Honey Street on the Kennet & Avon Canal in 1905. After a working life in and around Bristol docks, latterly for Fred Ashmead & Son, carrying cargo offloaded from ships on the last leg of its journey to the industrial east of the city that ships couldn’t reach, the Harriett was beached at Purton in 1964.

The Harriett has now been scheduled as an ancient monument and included in the National Register of Historic Vessels. Other hulks are more difficult to protect – they are neither covered by the Protection of Wrecks Act (as they are not on the seabed) nor eligible as Ancient Monuments (because they are not inland). This complicated issue has even been raised in the House of Commons!

The rest of the craft haven’t the same protection – and most of the other wooden ones are in worse condition, so don’t expect to see museum pieces. But for those visiting the site, there’s a chance to see some maritime heritage – and learn some history: as many as possible have been identified by small plaques recording their basic details, plus the details of the sponsors of the plaque – often the descendants of former crew, owners, or others who were connected with the old vessels.