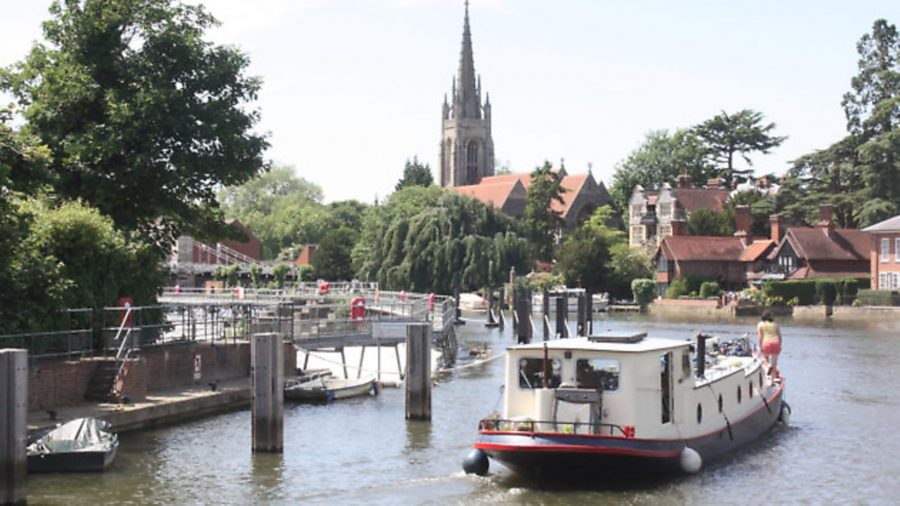 The narrowboat is the go-anywhere canal and river craft – but how far afield can you travel in something a bit wider? It’s a question we’re often asked, and there isn’t a simple answer…

It’s not hard to see the advantages of a widebeam boat. I remember my first experience of one when I hired a 9ft beam craft on the western Kennet & Avon in the 1980s after a series of narrowboat cruises – just stepping into the cabin and thinking “wow, what a lot of space!” If you want to live aboard, it’s obviously a very tempting option.

A major downside, of course – unless you’re planning to stay in one area most of the time – is the limited cruising range. But exactly how limited is it?

It’s actually not that straightforward a question to answer. For starters, while there’s a nice simple standard for narrow canals – a couple of feet over 70ft long by about 7ft wide (okay, a little tighter in two or three places, but modern craft are generally built to 6ft 10in anyway) – there’s no such standard for wide canals.

It’s all to do with the history of the network: the narrow canals were mostly built as a unified network covering the Midlands (but reaching to the north, south, and into Wales). Many wide waterways, on the other hand, grew from local river navigations, and their dimensions were often based around the traditional local river barges which had evolved in that particular area.

Yes, there are a certain number of canals and rivers with locks built (or in some cases rebuilt) to approximately 70ft by 14ft – for example most of the Grand Union, the Rochdale, Bridgewater, River Wey, Kennet & Avon and Nene. But even those aren’t standard (there are bridges on the GU less than 14ft wide; and locks on the K&A too short for a 70ft by 14ft boat). And elsewhere, length varies from around 57ft in Yorkshire (and even less on a couple of obscure Fenland locks) to almost 90ft on the Lee; while beam ranges from just over 10ft on the upper Great Ouse to 18ft-plus on the Bristol Avon, Trent, and Severn (and even bigger on the larger rivers with locks taking seagoing vessels). Not to mention that depending on cabin shape (especially with Dutch barge-style craft) it might be the superstructure rather than the hull width that’s the limiting factor.

There’s no point in trying to define a ‘standard’ (some years ago there was even a suggestion that the terms ‘broad’ and ‘wide’ should be used to define two different standard widths; sensibly this hasn’t caught on) as there simply isn’t one. We’ll simply use broad or wide synonymously to mean ‘significantly wider than 7ft’ – and while we’ll try to give details of restrictions narrower than 14ft in our regional roundup overleaf, anyone contemplating buying such a craft will need to look in more detail and take local advice first if they’re looking at more than about 10ft beam.

Even for one size of craft, your cruising range isn’t entirely set. We’re often asked whether it’s possible to get from the North to the South in a wide boat. And the answer is ‘no’: you’ll need to decide which area to base your boat in – but it isn’t that simple…

How big (and how many) the networks available to you are, depends on how prepared you are to take your pride and joy out into big tidal water; or to drag it through the shallows on a nominally wide canal with 14ft wide locks, but which rarely sees boats over 7ft wide.

In an attempt to make more sense of this, we’ll divide the English system into a narrow-beam centre surrounded by four broad-beam areas – which we’ll call the South-East, South-West, North and East, and consider each in turn, starting with the South-East and going clockwise. (There’s also the Broads, but that’s outside the scope of this article as it isn’t connected to the main network)

The South-East probably has the most wide boats based on it because it passes through the most populous areas and includes the entire River Thames – on which many broad craft are permanently based. It also includes the Lee and its tributary the Stort, the Wey, the Regent’s Canal, the Grand Union (main line as far as the edge of Birmingham, Slough and Paddington arms), Kennet & Avon and Basingstoke. If you head north of Stoke Bruerne on the GU you’ll encounter tunnels used by two-way narrowboat traffic, but wide boats can book an early morning passage when the tunnels will be kept clear of oncoming craft.

There are no serious length limits, just the Kennet & Avon as mentioned: while a 71ft 6in narrowboat can pass on its own, the maximum for widebeam is less, depending on exact width. As far as width is concerned, the tightest Stort locks (pictured) are just over 13ft, while some northern GU bridges are no more than 12ft 6in. From a practical angle, the Kennet & Avon’s shallow edges make passing other craft tricky (so draft as well as beam comes into play).

The South-West, the smallest widebeam area, comprises the Severn (pictured), its tributary the Warwickshire Avon, the Gloucester & Sharpness (the route to the Severn estuary) and, since 2011, the restored Droitwich Barge Canal.

Limitations include an ‘Armco’ metal pipe culvert on the way into Droitwich which limits width and depth at the sides (but can be discounted if you don’t mind missing out on the last mile or so), and some locks on the Avon which are tight for length (a 71ft 6in narrowboat can pass – just – but a wider boat would need to be a little shorter). There’s also a width limit of 12ft 9in on the upper Avon (above Bidford) and 13ft 6in below.

The North is the biggest cruising area for wide craft, including the entire Leeds & Liverpool, Ribble Link, Lancaster, Rochdale, Bridgewater, Aire & Calder, Calder & Hebble, Sheffield & South Yorkshire, New Junction, Ouse / Ure / Ripon Canal, Trent, Fossdyke, Witham, Soar (pictured), Erewash, Huddersfield Broad, and Witham Navigable Drains, plus navigable lengths of the Derwent, Pocklington and Sleaford, and parts of the eastern Trent & Mersey (to Burton), Chesterfield (to Retford) and Grand Union Leicester Line (to Market Harborough) – although on many canals, it may be the shape of the cabin rather than the width of the boat that matters.

For those who don’t mind complying with the regulations, there’s also the Manchester Ship Canal, which leads to the Weaver and the Chester Canal length of the Shroppie to Nantwich (but see below), while those prepared to tackle the tidal waters of the Humber can reach the rivers Hull and Ancholme and the restored parts of the Driffield.

It may be the biggest broad-beam cruising ground, but it’s the one with the most individual limits likely to affect leisure boaters. Mostly they apply to length, resulting from waterways designed for the short-but-wide traditional craft: the Leeds & Liverpool (62ft from Wigan to Leeds plus Rufford Arm), Sheffield Canal (60ft), Stainforth & Keadby (62ft), Calder & Hebble, Ure and Ouse above Linton, Huddersfield Broad, Pocklington and Derwent (all around 57ft for broad craft).

As far as width is concerned, almost all were built to 14ft-plus, but several Rochdale locks are now a few inches narrower, while the Shropshire Union just south of Ellesmere Port was narrowed by a new road bridge to barely 9ft, and Cowbridge Lock on the Witham Navigable Drains is only about 10ft wide. Finally, for anyone who’s made it through the Ship Canal to the Weaver and is tempted to ascend the Anderton Lift and see how far they can get: good luck! South to Croxton is something like 12ft 6in wide, north to Dutton Stop Lock is more like 9ft 6in (if your cabin will fit the tight tunnels), but Dutton Stop Lock itself (which would allow you through to the Bridgewater) is only about 8ft wide.

Finally, the Eastern area is a sizeable broad-beam cruising ground covering the Nene, Great Ouse (pictured), plus its tributaries the Cam, Wissey, Lark, Little Ouse and the Cambridgeshire Lodes, the Middle Level system and the Great Ouse relief channel.

The main thing to watch for is width – narrower locks on the Great Ouse and tributaries (from 13ft down to about 10ft in one case near Bedford), and on the Middle Level (the narrowest on the main through route is 11ft 6in). Lengthwise, a few short locks restrict access to the very top of the Little Ouse, the Lodes, and the (out of use) alternative Old Bedford route across the Middle Level.

Finally, a very tight bend at Whittlesey makes for a trade-off between length and width on the Middle Level – a 72ft narrowboat can do it, but a wider boat would need to be shorter.

Getting Between the Regions

We’ve described four areas but, as I said earlier, it isn’t that simple. Is your boat seaworthy enough to make the passage between these areas? Obviously, it’s a decision based on your experience, local knowledge, and the seaworthiness of your craft (and sometimes the opinion of your insurers), but it’s probably fair to say that, in many cases, broad-beam craft are likely to be at least as stable and suited to estuarial waters as narrowboats.

This gives you two possible tidal ‘links’. Firstly, from the North to the East, by taking the tidal Witham from Boston to the Wash, crossing the Wash (which may involve beaching your boat at low tide), and then following the Nene to reach non-tidal water at Dog-in-a-Doublet Lock below Peterborough. And secondly, from the South-East to the South-West by following the tidal Avon Gorge from Bristol to Avonmouth, waiting for the tide at Portishead, before heading up the Severn Estuary to Sharpness.

Neither is to be undertaken lightly, but it’s something to be considered.

For the future, both these tidal trips should one day no longer be necessary. The Fens Link proposals would create a new inland broad-beam route from the Witham below Boston via the Black Sluice Drain and the rivers Glen and Welland to the Nene near Peterborough.

And completion of either the Cotswold Canals restoration from the Gloucester & Sharpness to the Thames; or the plan for new locks on the Higher Avon above Stratford and a link to the Grand Union near Warwick, would in each case create a through route for craft up to around 12ft 6in wide (while together they’d make a rather good widebeam ring). That leads us inevitably to whether, having opened those new routes and merged four widebeam areas to make two, we can make two into one. Can it be done, without the wholesale widening of narrow locks which would struggle to find favour with heritage-minded canal supporters and navigation authorities?

One option that’s looking less likely is the rebuilding of the former widebeam inclined plane by Foxton locks (which, to create a broad beam link, would need to be accompanied by something at Watford Locks too) – as the Foxton Inclined Plane Trust has reluctantly decided it simply isn’t affordable at the present. Widening the Northampton Arm locks might look tempting on the map, but with heritage narrow locks, and greenfield or floodplain development issues likely to stymie any idea of a wide beam bypass, I wouldn’t rate its chances.

More likely is the Bedford & Milton Keynes Waterway – a proposed new canal from the Great Ouse to the Grand Union which has seen some actual construction work already.

Even so, and speaking as a lifelong waterway restoration supporter (with  all the innate optimism that implies),  I wouldn’t advise anyone to buy a boat  on the assumption that any of these restorations or new links will happen. If you want to go broad beam, do it on the basis of how much of the network you can enjoy today, not on what you may be able to cruise in a couple of decades.