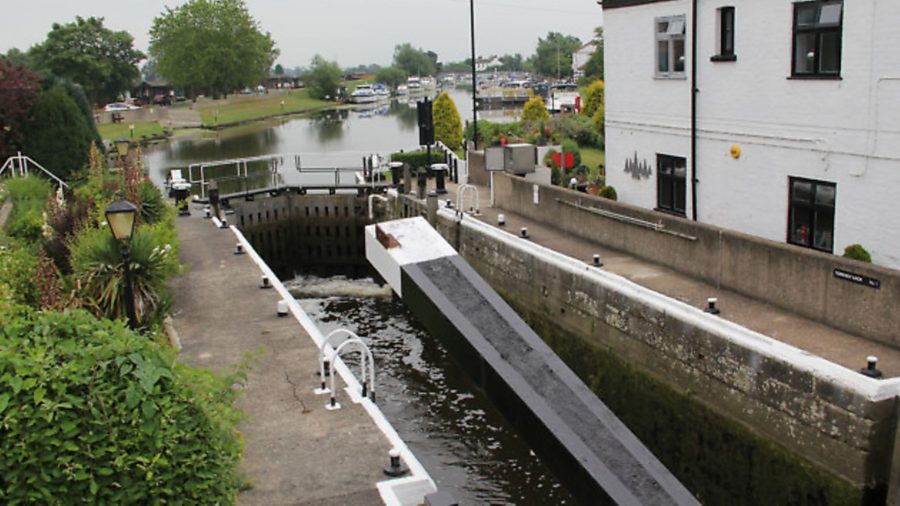 With their straight courses and few locks, they might not be the most exciting of waterways – but the Fossdyke and Witham are well worth a visit for their history, the ‘big sky’ country, and for the cruise into historic Lincoln and Boston

Most people are aware that the Romans built roads throughout Britain, but how many know they built canals for transport as well? The Fossdyke Navigation was built around 120 AD to connect the Trent at Torksey to the Witham in Lincoln, which makes it Britain’s oldest artificial waterway still in use today.

A thousand years later, Torksey and Lincoln became busy inland ports after the canal had been improved by authorisation of King Henry I. Stone was carried along the Fossdyke Navigation for the building of Lincoln Cathedral, whose construction began around 1185.

It was still a busy commercial waterway as late as 1958, when 50,000 tons of merchandise was brought to warehouses alongside Brayford Pool in Lincoln. At this time the tonnages were made up of fertiliser, grain and animal food mainly originating from the docks at Hull and brought along the Trent. Humber Keel barges were a regular sight on the Fossdyke.

Commercial carrying has now ended, and the warehouses at Brayford Pools have gone. Now the only craft seen on the Fossdyke are pleasure boats, usually heading for Lincoln and Boston.

Entry to the navigation is from the tidal Trent at Torksey Lock which is manned by a lock-keeper. As entry is subject to the state of the tide, boaters should contact the lock-keeper when planning their journey.

It has hard to believe that the quiet little village of Torksey was once an important port on the River Trent. Today, the lock has an information point, a café and a nearby pub, and there are overnight moorings and boating facilities. For much of its route the 11-mile Fossdyke follows a series of straight lengths, as befits a Roman waterway. It passes through flat, open countryside with not a lot to see until reaching Saxilby.

Saxilby has visitor moorings and a pleasant waterfront with tree-lined grassy banks, and there are shops and pubs nearby. However, there are few facilities for boaters, who must travel a further two miles to the marina at Burton Waters. This isolated stretch of waterway includes the popular Pyewipe pub and restaurant which is about a mile beyond the marina. There are moorings here, and the outskirts of Lincoln are now just a mile away with the outline of the cathedral clearly visible.

The Fossdyke Navigation ends where it meets the River Witham at Brayford Pool in the centre of Lincoln. This was once the commercial heart of the city with a large expanse of water surrounded by warehouses, mills, timber yards and maltings. A British Waterways Depot Report for October 1958 describes its Lincoln Depot as “a three storied warehouse where six hundred tons of goods are stored undercover”. Around 10,000 tons of varied produce were handled there in that year.

Today, most of the old industrial buildings have gone, replaced by restaurants, bars, a multiplex cinema and the university which now dominates one side of the pool.

From here on, our journey continues on the Witham Navigation, whose 32 non-tidal miles lead from Lincoln to Boston.

The first section of the Navigation is extremely narrow as it passes from Brayford Pool under the old High Bridge, popularly known as the Glory Hole. High Bridge is reputed to be the oldest bridge in Britain that is still occupied by buildings. It was built in 1160 but the current shops probably date back to the mid-16th Century.

The street that spans the Glory Hole passes under a gatehouse and then rises very steeply (with the appropriate name of Steep Hill) to reach the dizzy heights of the cathedral and castle. Lincoln Castle was originally built in Norman times as a stronghold for William the Conqueror. It is one of the best preserved castles in Britain and is open to the public as a museum. It is possible to walk along the castle walls which give panoramic views of the city and the nearby cathedral. (See right)

Back at the Witham, the waterway leaves the Glory Hole and passes beneath a Millennium Sculpture by the Waterside shopping centre and a floating tearoom. The opposite side is dominated by the Central Market building which is an indoor market with 80 stalls. This area by the river is very popular with visitors and locals alike, with a waterside pub and places to just sit and watch the boats go by.

Ahead lies Stamp End Lock, and beyond that the Witham soon leaves LIncoln behind – although the cathedral on its hill remains visible for many miles.

The Witham Navigation continues through a landscape very similar to the Fossdyke, with open countryside behind high banks as it heads eastwards for seven miles to Bardney Lock. On the way it passes villages such as Washingborough and Fiskerton – not to confuse the latter with another village of the same name by the River Trent.

Bardney Lock provides some boating facilities and visitor moorings. Look out for the unusual tribute to former lock-keeper Mrs Wright who looked after the lock for 34 years. A clockwork recording box recalls the memories of Mrs Wright’s two daughters about life around the lock in their childhood. The backwater below the lock is navigable for a short distance: it doesn’t (as shown in some current waterway guides) lead to a marina, but it does lead to a pub.

Bardney Bridge is close to Bardney village which has shops, cafés and pubs. Here the waterway is overlooked by the towers of a huge sugar beet factory which can be seen for miles around. Bardney Bridge is the location of the Bardney Heritage Centre where you can learn about local history, the sugar beet factory, the old railway, the river and local agriculture. It is situated on the Water Rail Way which is a long-distance footpath and cycleway that follows the river all the way from Lincoln to Boston along the disused trackbed of the former railway.

The countryside around Bardney was once home to nine mediaeval abbeys.  The remains of Bardney Abbey can still be seen and also Tupholme Abbey whose ruins have played host to several music festivals including a concert in 1972 which featured both Rod Stewart and the Beach Boys. Tupholme Abbey can be found about a mile north of Southrey which has a riverside pub and restaurant.

Southrey is the only stopping place in seven miles between Bardney and Kirkstead Bridges which are the only crossing places over the river. This is an empty, quiet country of wide skies and a flat farming landscape where fields are divided by drainage dikes.

There are moorings at Kirkstead Bridge and pubs in the nearby village. The resort town of Woodhall Spa is a mile to the north.

After Kirkstead Bridge the river takes on a more gently winding southerly course without the high banks of the earlier straighter sections. There are another four miles of pleasant waterway, before we reach the next crossing point at Tattershall Bridge.

The former Horncastle Canal once connected to the Witham about half a mile north of Tattershall Bridge. This 11-mile long waterway based on the River Bain, which mostly carried agricultural produce, closed in 1885 – but there have been proposals in recent years to restore it.

Tattershall Bridge has visitor moorings and a pub. At Tattershall village, a mile away to the north east, you can visit the remains of a medieval castle now owned by the National Trust, and a leisure park built around worked out sand and gravel pits.

There is another riverside pub with moorings at Dogdyke, then at Chapel Hill is the entrance to Kyme Eau – which forms the first length of the Sleaford Navigation. This waterway based on the River Slea has been partially restored and is now navigable for seven miles via South Kyme village to Cobblers Lock. Chapel Hill has moorings a marina and a caravan park.

The navigation now returns to following a long straight course with high banks as it crosses Holland Fen. Once again this is flat, farming country crossed by dykes and with no road bridges for miles until it reaches Langrick Bridge. The river bends at Langrick Bridge where there is an American style bar and grill which rejoices in the name of Witham & Blues.

It is two more miles to Anton’s Gowt where there are moorings with a pub nearby at Frith Bank. This is also where a lock provides the gateway into the Witham Navigable Drains.

The Drains form an extensive network of channels originally dug for land-drainage in the 1600s which criss-cross the fenlands north of Boston. They were then made navigable, and carried produce from the newly created farmland in the area.

Although part of the system is no longer accessible, many of the Drains are still navigable – but visiting boaters should be aware that their main purpose is drainage rather than navigation: there are low bridges, boaters will experience a fair amount of weed at certain times of year, and between October and April, the water levels may be lowered.

The most popular route on the Drains is via Frith Bank Drain to Cowbridge Lock and then the Maud Foster Drain which provides an attractive alternative entry into Boston. Note the impressive Maud Foster Windmill near the end of the navigation (see right).

Back at the main river there is a bend after Anton’s Gowt, then the river follows a predictable straight line into Boston. The impressive tower of St Botolph’s Church, popularly known as Boston Stump (see previous page), becomes increasingly prominent as you enter the town.

Non-tidal cruising ends at The Grand Sluice, built in 1766 to prevent flooding and improve drainage. There are extensive moorings at the marina before the sluice and railway bridge. Boston town centre is close by. The town has a wide range of outdoor markets with a museum and arts centre for those with cultural interests.

At the Grand Sluice the river becomes tidal and, at low tide, the river in front of the Stump is reduced to mud banks. The tidal Witham continues to the Port of Boston (once the second largest port in Britain and still active today, importing goods from Scandinavia and the Baltic countries) and beyond towards the Wash.

Although suitably equipped narrowboats in the hands of experienced navigators have crossed the Wash, the main reason for inland boats continuing beyond Grand Sluice is to access Black Sluice Lock. Situated on the right on a sharp bend in the river, this is the recently opened entrance lock to the South Forty Foot Drain. Currently a dead end, this forms the first length of the future Fens Waterways Link planned to run across the Fenlands to the River Nene.

For now, while few boaters would regard the Fossdyke and Witham as being among the most exciting or picturesque waterways on the system, they do allow you to cruise right into both Lincoln and Boston – and that, on its own, is enough to make it a most worthwhile journey.