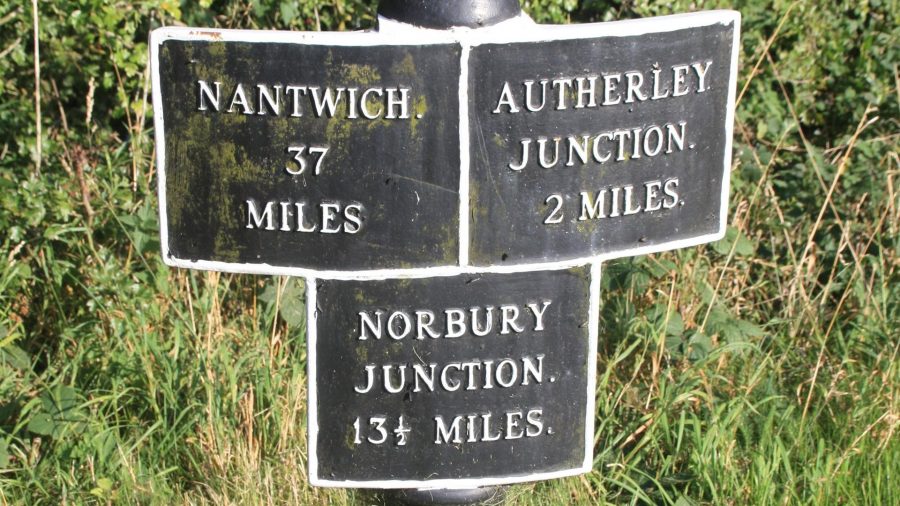 Canal companies needed to measure how far each working boat had travelled on each journey, in order to charge the right toll. Heritage spotter Martin Ludgate goes in search of the mileposts and milestones that enabled them to do this…

Old toll-house buildings still found alongside some of our waterways (such as at Braunston and Brentford on the Grand Union Canal) remind us that in the days of cargo-carrying, the working boats were charged tolls to use the canals. The amount they had to pay was based on a fixed rate per ‘ton mile’ for a particular type of cargo on a particular canal. This rate was then multiplied by the number of tons they were carrying, and by the number of miles they carried their load, to calculate the toll charged.

Devices called ‘gauging rods’ were used to measure the weight of the cargo, by measuring how many ‘dry inches’ of the boat’ hull were visible above water; the toll-keeper then compared this with a ‘gauging record’ kept in the toll-house for every boat on the canal (and which would have been created after the boat was originally launched, by loading the boat up with weights and measuring how far down it went), to convert the inches into tons. But how did they measure the miles travelled?

The answer is that distances along most canals were marked out every mile with mileposts or milestones. In many cases a legal requirement to install mile markers was laid down in the Act of Parliament which authorised the construction of the canal. In fact these Acts often went into considerable detail about what the toll rates should be, and how they should be calculated. Taking the example of the Brentford Toll house mentioned above, which was one of a series of about ten (a few opened and closed over the years) along what was originally the Grand Junction Canal (now the southern part of the Grand Union) from Brentford to Braunston, the original Grand Junction Canal Act specified the following:

The toll per ton mile would be ¼d (for the benefit of those whose memories don’t go back to 1971, 2.4d = 1p) for limestone and lime; ½d for livestock, bricks and some other building materials, manure, pig iron, pig lead and ironstone; ¾d for coal and coke; and 1d for other goods. A fraction of a mile would be charged as if it was a whole mile; a fraction of a ton would be charged to the nearest quarter below. Manure for local land, and sand or gravel for local roads would be carried free so long as it didn’t pass through any locks; while troops, their horses, arms, equipment and stores would be toll-free – perhaps a significant concession, given that the canal served Weedon Barracks.

But before the canal was even opened, the engineering difficulties coupled with the economic impact of the Napoleonic wars led to a need for more money, so a subsequent Act increased some of the tolls. Subsequently the arrival of the railways saw rates reduced to try to stop the loss of traffic, at the expense of a decline in profitability.

But they were still largely based on a ‘per ton mile’ basis. Those miles were marked out with a series of markers giving the distance to Braunston – and they can still be seen today (still carrying the original initials ‘G.J.C.Co.’), as can similar markers on many other waterways.

Some are still the originals installed by a canal company when its route opened. Others are replacements from later in the cargo-carrying era – for example the Trent & Mersey replaced its original milestones with cast iron posts after 40 years. A more general piece of rates and tolls legislation in the 1890s led to some canal companies (including the Leeds & Liverpool) re-measuring their route and replacing the markers around then. And some have been put in place more recently by canal societies or other groups to fill gaps left by the loss of the originals.

Less commonly, as well as the mile markers, you may also spot a few surviving intermediate half-mile and quarter-mile markers which gave a more accurate measurement on some canals, often marked with just a simple figure such as ‘¼’ rather than placenames and full distances.

The designs varied considerably, as did the amount of information included. The Grand Junction posts simply give the distance to Braunston, while the Trent & Mersey ones give the mileage to both Preston Brook (the west end of the canal) and Shardlow (the last village on the canal before its eastern end). And on the Birmingham & Liverpool Junction (now the southern part of the Shropshire Union Main Line) they give not only the distance to both ends at Autherley and Nantwich, but also to Norbury Junction where the important Newport Branch led off to link to the Shrewsbury Canal.

At the opposite extreme, on the Gloucester & Sharpness Canal the placenames at the ends of the canal are abbreviated to a rather terse ‘G’ on one face on the triangular post and ‘S’ on another. The Ashby takes this further – there are simply two numbers, with nothing to say that they were the distances to the termini at Marston Junction and Ashby Woulds. And the markers themselves are rather minimalist sloping-topped rectangular steel posts with just a little ornamentation in the form of a border around the numbers. But this is actually a nod to their heritage: the rather functional form was a deliberate (and more hard-wearing) replication of the old sawn-off railway sleepers which had been used in the past.

Some canals retained stone markers rather than metal posts – the Macclesfield, Peak Forest and Calder & Hebble Navigation are three examples – while on the Worcester & Birmingham Canal a metal plaque is set into a stone pillar.

Their brief messages incorporate some snippets of canal history: we’ve already mentioned posts which reference the earlier names of canals – such as the Grand Junction – which have passed into history, as well as the mention of Norbury Junction which lost its significance as a waterway junction when the Newport Branch was abandoned in 1944. And the mileposts on the Grand Union Leicester Line, which also say ‘Grand Junction’, must therefore date from after the 1894 takeover when the Grand Junction company took over from the two original companies which had built it.

But the Caldon Canal mileposts go much further back into history: they still proudly announce the distance to Uttoxeter, terminus of the former 13-mile extension of the canal, which last saw a boat in 1849. Incidentally, following on from a programme by the Trent & Mersey Canal Society to reinstate missing milestones on the T&M, the Caldon & Uttoxeter Canals Trust has used the same patterns (the Caldon was a branch of the T&M and used the same design) to reinstate missing posts on the route through to Uttoxeter – our picture shows Waterway Recovery Group volunteers helping with this project in 2019.

Finally on that subject, there is one milepost with a five-eighths of a mile fraction. But it’s a special one installed in recent years. The Leeds & Liverpool, Britain’s longest canal built as a single entity, is 127¼ miles long, and is marked with metal posts saying (for example) “L’POOL 1 MILE” and “LEEDS 126¼ MILES” – with the Leeds & Liverpool Canal Society leading a programme to replace missing posts and refurbish survivors for the canal’s bicentenary in 2016. But to mark its exact mid-point near Rishton, a special post was made as the centrepiece of a towpath artwork involving ironwork designs by local school pupils, indicating 63 and five eighths miles in each direction.

Whilst mile markers are yet another interesting and quirky piece of canal heritage, do they also have a useful function for today’s boaters? No, I’m not anticipating the chap at Brentford gauging our boat, asking us how much manure we’re carrying, and charging us a pre-decimal ha’penny for every ton mile. But just occasionally on the long level pounds further north on the Grand Union, I find myself on the tiller, looking at the mileposts as we pass them, glancing at my watch, and using them to gauge what time we’ll be in the Boat Inn…