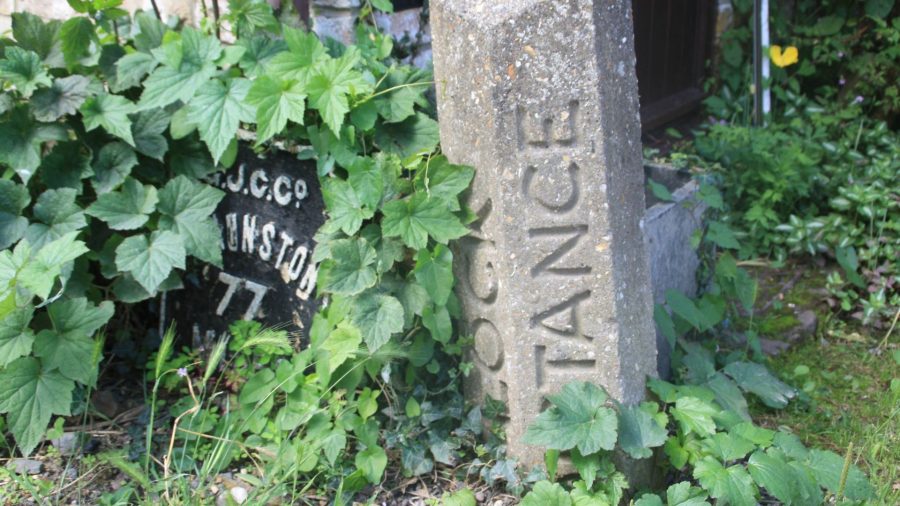 Heritage spotter Martin Ludgate has been in search of the small metal, concrete or stone markers which were installed in the hope of settling disputes between working boat crews, otherwise known as “lock distance markers”…

Head southwards along the summit of the South Oxford Canal from Marston Doles Top Lock, and look out on the towpath side after just a few yards. There, up against the towpath hedge, you should (depending on how recently the vegetation has been trimmed back) spot a small metal post with ‘DIS’ cast into it.

What does it mean? Sure, in Dante’s Inferno, Dis is the name of the city occupying the sixth to the ninth tiers of Hell, but that’s a little bit unfair to the Oxford Canal (although some of our readers might have their own suggestions for waterways which might deserve the description). But no: for a better clue, take a walk northwards from Coppermill Lock at Harefield on the Grand Union Canal, and you’ll see something similar but a little more enlightening. By the corner of a building alongside the towpath, adjacent to a typical Grand Junction Canal (the GU’s predecessor on the Brentford to Brauston length) milepost telling us that it’s 77 miles to Braunston, stands a small concrete post with the words ‘Lock Distance’ cast into it. And yes, in the case of the post on the Oxford Canal, ‘DIS’ isn’t a reference to the infernal regions, it’s short for ‘DISTANCE’.

These are just two of the examples which I’ve photographed on my recent travels to illustrate this article. There are many more of them on both waterways. And the explanation is that they were installed to settle arguments between boatmen.

Apparently if two boats were approaching a lock from opposite directions at the same time, disputes were common between the crews over which boat had the right of way – and apparently sometimes these descended into fights.

So, the canal companies (possibly fed up of complaints about the boatmen’s ways of settling things on the locksides) decided to do something about it. They set up a pair of these posts at equal distances (in the Grand Union example above, it appears to be a little over 200 yards – always assuming it hasn’t been moved from its original position) away from a lock in either direction, and whichever boat passed the post first could claim the right to use the lock first.

But how would boat crews know whether a boat coming the other way had past the post before them? Their instructions were to sound their horn (or sound their whistle if it was a steamer, or crack their whip if it was a horse boat) as they passed the post, and so long as they hadn’t already heard a crack or a toot from the distance, the lock was theirs. Problem sorted?

But I can’t help wondering: wouldn’t it make more sense for the canal company to simply rule that boat crews should do what (we trust) all our readers would do today? That is: if the lock’s empty, the boat heading uphill gets it first; and if it’s full, the downhill one gets right of way, thereby saving water and effort all round. And wouldn’t boat crews tend to do that anyway? Or would they really turn a lock around in front of a boat heading towards and only a couple of hundred yards off?

Several books have mentioned a fairly fiercely competitive rivalry to working boat life when it came to keeping ahead of other craft. And as it happens, a couple of new editions that we’ve reviewed in recent months have shed some light on this, from the latter days of freight carrying on the canals. Firstly the reprint of Roger Alsop and Graham Dodkins’ 1988 book Working Boats, re-creating a journey from his time working a pair of Willow Wren carrying craft in the 1960s, describes a girl on a rusty bike spotting them for newcomers and shouting at them to “Pull over and let us pass!”, to which they replied “I’ll let your pair through when they’re at the back of my boats and not until!” – which perhaps sets the tone.

But the new edition of the classic John Knill’s Navy actually mentions the Lock Distance posts: “The procedure was normally that whoever passed on of these distance posts first had priority through the lock. In the interests of economy of water, however, it was general practice that a boat working down to a full lock or one working up to an empty lock went through first, providing it was within half a mile of the lock. I must say that, as with most things on the canals, the boatmen have a great sense of camaraderie, and everything was done with good spirit. There was the occasional stroppy boatman who preferred to be unpleasant, but they were few and far between.”

A second thing that I can’t help wondering is: would anyone know if you hooted your horn before you’d actually reached the distance post? Did their existence really stop any fights? Or did they just allow the canal company to say that they’d “done something about it”? And finally: is it just the Oxford and the Grand Union where this issue arose? Or do any readers know any other canals which feature them?

Author’s note: Actually I can answer the last question: in my travels since I originally wrote this article I’ve come across another waterway that features them: rather further north on Yorkshire’s Calder & Hebble Navigation there are marker stones close to some of the locks which say ‘100 Yds’, and clearly had a similar function.

But whatever the answers to these questions, they’re another little piece of waterways heritage to look out for – and even if (we hope) they aren’t necessary to prevent towpath brawling these days, they can be a handy reminder to be ready with the windlass because there’s a lock just around the corner.