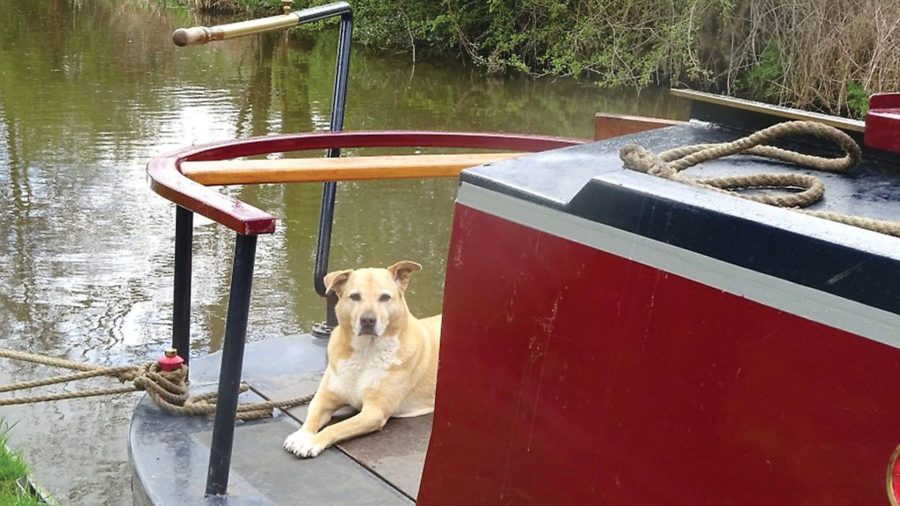 Canal crimewaves are few and far between but it makes sense to consider a few prudent precautions… and a watchdog on board helps, says Neil Barnett

To hear some boaters talk you would think it’s ‘bandit country’ along some of our canals, and there are some who never or rarely take their boats out from their marina or permanent moorings for fear of what might happen to them.

Of course instances do occur where boaters have encountered problems, some of which can be quite frightening and unsettling, and these naturally should not be dismissed lightly. But thankfully they are extremely rare, especially when one considers the thousands of boats which are out there using the canal system at any one time.

Over many years I have travelled most of the canal and river network, cruised through and moored in many of our towns and cities including some of the so called trouble hotspots. In all that time I have rarely encountered problems. I’ve twice had kids throwing things at me, once had them hopping on and off the boat or merely being unsettlingly inquisitive, and I one time I was awoken from my slumber to find my boat freely drifting after some ‘jokers’ had released the mooring ropes. But this is over a period of 40 years and over 4,000 miles of cruising.

I’m still here to tell the tale and my boats have been none the worse for it. Whilst any such encounters are of course unpleasant and can be unsettling, in the grand scheme of things is it really so dangerous out there? Of course not.

I cannot say for sure whether it’s happened but I’ve never heard of a boater being randomly murdered or seriously injured, and how often do we read or hear of boater being attacked or robbed? Very very rarely and there is probably more chance of this happening when walking along an urban street. So perhaps we should put things in to perspective and not become too paranoid, but at the same time be mindful of what could happen no matter how unlikely it may be.

You can of course encounter problems in rural as well as urban areas, but by and large if you are unlucky enough to stumble upon any trouble it is more likely to be in the more built up locations.

Often it is inquisitive and rather bored teenagers, and the worst thing you can do is to try to ignore them for this can create an ‘us and them’ situation. I have found it better to engage with them even if it’s just a wave and a ‘good morning’ . On occasions and often in urban lock flights we have met youngsters and chatted to them, sometimes merely just a few words. We might have nothing in common, but the fact that we have acknowledged them is enough. They realise that you are ‘normal’ people not some alien species.

They may ask you to let them on board for a ride. If you don’t want this then be firm but polite. I try to avoid them coming aboard, often using the excuse that my insurance won’t allow it, but I have on occasions let them onto the deck. If this happens deal with it as you think best at the time and in a way with which you are most comfortable.

We have sometimes had youngsters helping us through a flight of locks, something which they have thoroughly enjoyed and that we have been grateful for. Remember that often it’s just that they are bored and want something to do.

Some common sense and a little foresight helps to alleviate any potential problems and whilst not wishing to encourage paranoia, I have found that it doesn’t do any harm to consider a few precautionary measures.

I usually keep the forward cabin door locked and be ready to lock the rear cabin door when passing through some areas if a situation looks as if it may be intimidating, so as to reduce the risk if they were to have an ulterior motive. Or if you feel particularly threatened or vulnerable, separate the cabin door key from the ignition key ring and hide it away in your pocket. With the cabin doors locked you could always tell a ‘white lie’ if they ask to look inside, and say that you are merely moving the boat for someone and don’t have access into the boat.

Keeping an umbrella handy offers a little protection if you encounter any stone throwing, as does a suitable hat. This could at least buy some time while you move away.

Have your phone or camera ready so that you can film (or pretend to do so) any potential miscreants. I had an instance in Stoke on Trent where a couple of kids on an embankment were hastily gathering stones as we approached. I held my phone towards them pretending to film them and they immediately sat down and just watched as we went by.

Having a dog on board can help too. Once when approaching a village on the Shropshire Union Canal a boater coming from the other direction told me that there were some youths further ahead throwing things from a bridge. As we approached the bridge I began to move over towards the towpath and as soon as they saw me about to alight from the boat with my dog they ran off.

When mooring up either overnight or just for an hour or so, remove the tiller and pin and take the other items such as windlasses inside. Lockable fuel caps are the norm these days, but if you don’t have one, get one fitted.

If choosing somewhere to stop overnight, moor where possible where there are other boats. Avoid mooring outside or too near to pubs if you are concerned, for apart from the possible noise it is often alcohol fuelled revellers in high spirits who may cause you problems.

If you are concerned about being set adrift when moored up, particularly if you are leaving the boat for any significant time, use a length of chain and padlock in addition to ropes, secured to at least one part of your boat. The consequences of being set adrift on a river are even more severe, so a secured chain would give you peace of mind, however due the rise and fall of water levels you must ensure that there is plenty off slack to allow for this, and possibly a method of quickly releasing it if need be. In these situations I often don’t use a padlock because the mere sight of a chain is enough to deter the causal mischief maker and for this reason it doesn’t have to be a heavy duty chain either.

How do you prevent a break in when you aren’t with the boat? The more preventative measures you take the less chance you have of having your boat broken into. But how far do you go? Certainly a thoroughly secured boat will often put off a casual burglar but there is very little that can be done to stop a determined thief, and the more you secure your boat the more likelihood there is of them causing damage trying to get in.

I have known boats that despite having things such as iron bars across the doors and tamper-proof padlocks on the door handles, somebody has gained entry by breaking a window or prising open the side hatch doors with a crowbar. Having a padlock on the cabin doors is a measure many boaters take, but I feel that it is also a giveaway that nobody is onboard the boat.

If you are away from your boat when darkness falls it is good to leave a light or two on, and I also use what is known as a fake TV which is a standalone device about the size of a small alarm clock. It’s LED light flickers blue and white light intermittently and perfectly mimics the light projected from a real TV. From the towpath it really does look as if there is a TV on in the boat. They cost around £30 and although 240v they hardly use any power.

Thankfully boat thefts are extremely rare, but if you are leaving a boat unattended for more than an hour or so it might be a good idea to choose a way of immobilising the engine. Fitting an alarm is okay too, especially those which text your mobile to alert you, however some can be prone to going off mistakenly and therefore may be annoying to others.

Be careful when casually talking to people because you could inadvertently give a potential thief vital information. I know somebody who chatted to a member of the public when going through some locks at a popular ‘gongoozler’s location. A man came over and was admiring the boat, and in no time at all had gleaned from this seemingly innocent conversation that the boater was returning to his base from a two week holiday, he would be back to his moorings the next day, and where he moored his boat.

The gongoozler casually suggested to the boater that judging by his accent he ‘was not from round these parts’ and the boater innocently revealed that he lived a fair distance away in Kent, and that he wouldn’t be coming back to his boat for about a month. Three days later the boat was stolen from the moorings never to be seen again.

When you leave your boat, keep valuables hidden away where possible and in places where you think a thief wouldn’t look, but be sure to remember where you have hidden them! I have created a shallow false floor at the base of my dinette and one in the bottom of a cupboard which is ideal for keeping money, jewellery, passports, driving licence and other documents in.

Many of these suggestions I’ve made are down to common sense and a little forethought, and hopefully my advice will be helpful and ease any concerns for those few who are nervous about venturing away from their moorings.

As I mentioned earlier, it really isn’t as bad as some make out. Put things in perspective and please get out there and enjoy the wonderful sights and experience of cruising our wonderful canals and rivers, and don’t let the few ‘doom-mongers’ put you off.