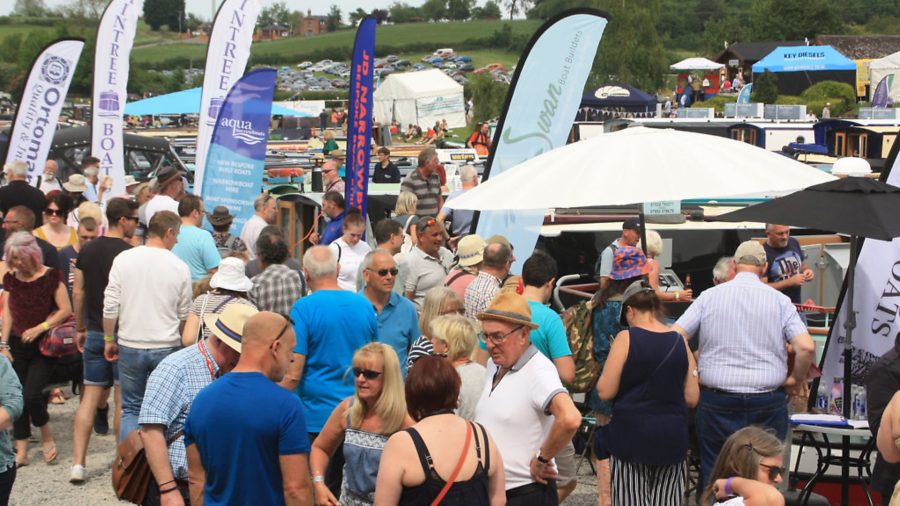 The evolving response to the Coronavirus threat has taken its toll on inland waterways events, with many being cancelled or postponed – the most high-profile being the Crick Boat Show (pictured).

Scheduled to take place on the late spring Bank Holiday weekend, the country’s largest inland boat show has now been put off until “later in the year”, with the Director Peter Johns explaining that “The health of visitors, exhibitors, volunteers, contractors, suppliers and our staff is paramount and with the currently projected duration of the Covid-19 outbreak, it has become clear that now is the right time for us to postpone the 2020 Show.” He promised to announce a revised date later in the 2020 “as soon as possible”, while the Canal & River Trust’s Matthew Symonds said CRT would “work with them closely to secure an alternative date”.

Meanwhile, the Inland Waterways Association has cancelled its popular annual Canalway Cavalcade festival at London’s Little Venice, many other events including the Moira and Norbury canal festivals have also been scrapped, and given the Government’s advice it seemed likely that few, if any, will take place.

CRT’s museums and other attractions have shut their doors, Mikron Theatre, which tours by narrowboat, has called off its 2020 tour, and trip-boats have ceased operation – but hire companies were still operating, with special arrangements for handovers, as we went to press.

Further afield the French and north Belgian waterways had been entirely closed to pleasure boat traffic as we went to press, but CRT said that “for as long as this remains consistent with Government advice” it was “working with employees, volunteers and partners” to keep the system open to navigation and to continue providing the day-to-day service including maintaining facilities and providing pump-out cards and keys as long as possible. Indeed, the Trust said that waterways remained a good option for time in the fresh air “away from the hustle and bustle of more crowded environments”.

The Trust has issued advice (see below) on the Coronavirus including a FAQ (frequently asked questions) on canalrivertrust.org.uk.

With the situation changing rapidly anything that appears here may well be out of date by the time it appears in print. But as we went to press, the Canal & River Trust was committed to keeping the network open – and had issued advice and answers to questions including:

Should boaters still be cruising? Yes, boating does not necessarily put people in close contact with others, but boaters may decide to take precautions such as washing hands after using locks and mooring at quieter places.

What should self-isolating continuous cruisers do? Phone 03030 404040 to inform CRT and to arrange an ‘adjustment’ to the need to move on.

Is CRT supporting boaters who are at risk? The Trust is contacting boaters who it knows to be in a high risk group, including those known to have disability adjustments, be pregnant, or be over 70, to let them know their options and that assistance is available.

Does CRT have any general advice? Although CRT realises that the boating community is very supportive of one another. the Trust asks boaters to look out for the more vulnerable, such as saving spaces near facilities for those in need, not staying too long on on popular moorings, and letting CRT know about vulnerable boaters.

CRT also urged boaters to get in touch with any other issues such as struggling to pay licence fees, to get provisions, or to keep floating businesses going.