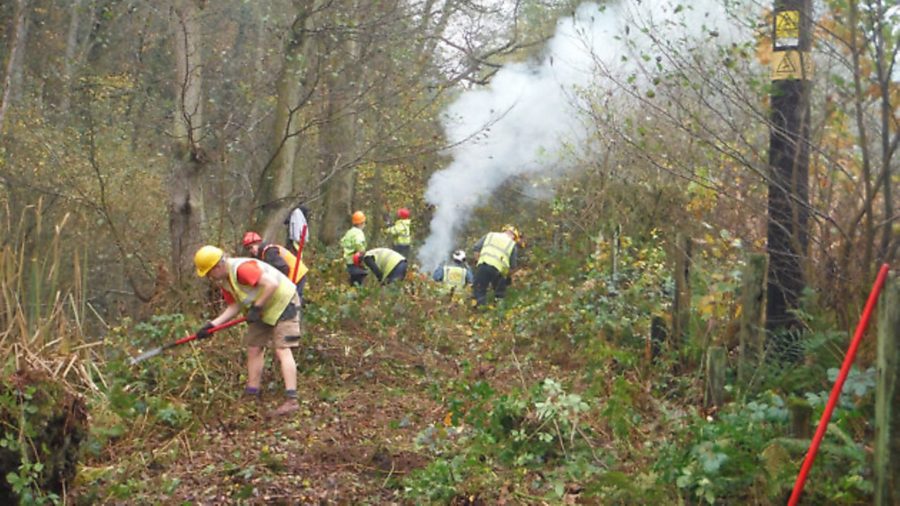 Several hundred yards of the former Uttoxeter Canal towpath emerged from over a century’s growth of trees and vegetation, as the Waterway Recovery Group’s volunteers targeted the site with their annual Reunion major working party.

Over 60 volunteers from all over the country, armed with bow-saws and loppers, cleared a long stretch of formerly impenetrable canal bank between Alton and Crumpwood in Staffordshire’s beautiful Churnet Valley, as the first step towards restoring and reopening the canal itself. Meanwhile WRG Forestry, a separate team of experienced volunteers trained in chainsaw operation, tackled large trees which were obstructing the canal and damaging surviving structures at the unusual Crumpwood Weir, where the canal crosses the River Churnet on the level.

A delighted Steve Wood from the Caldon & Uttoxeter Canals Trust said “Thank you WRG volunteers” for “doing such an amazing job”. The Trust’s next project in its long-term aim of reopening the entire 13 miles of canal from Froghall to Uttoxeter will be the restoration of Bridge 70, the canal’s last surviving stone arch bridge, which stands between the two sites where the WRG volunteers were working.

See www.cuct.org.uk for more about the Trust’s plans.