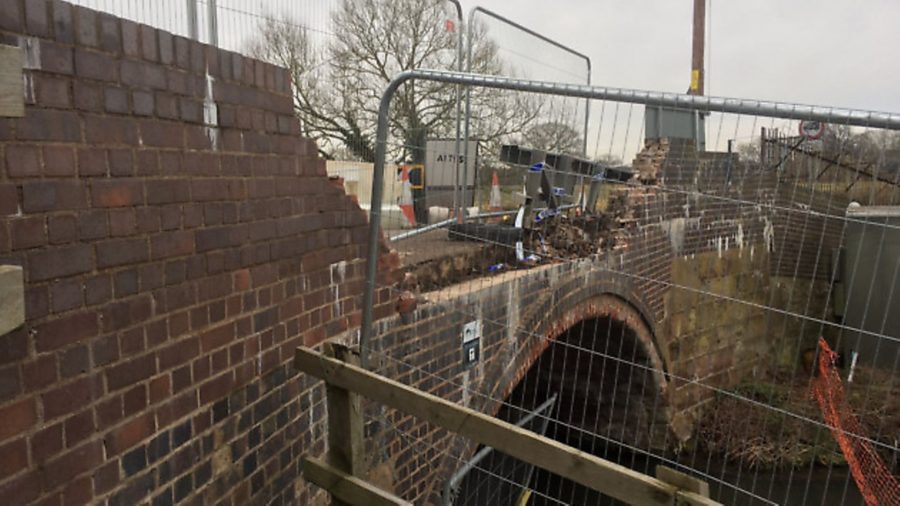 After yet another ‘bridge bash’ resulting in damage to a historic structure, the Canal & River trust has renewed its appeal to road vehicle drivers to slow down and pay more attention when crossing old canal bridges.

The latest incident occurred in Staffordshire, where a vehicle hit the parapet wall of Dimmingsdale bridge, sending a 5 metre length of masonry crashing down onto the Staffordshire & Worcestershire Canal and adjacent towpath.

Waterways Manager Ian Lane described these old brick bridges as “an important part of the Staffs & Worcs Canal’s character” and pointed out that “each time a bridge is hit, a small bit of history is lost”.

Although on this occasion the driver has been identified enabling CRT to recover the costs, often ‘hit and run’ incidents leave the Trust footing the repair bill – adding up to over £1m per year.

“If motorists just slowed down a bit and took more care and attention then they would save themselves and us a lot of cost and aggravation, and protect the nation’s important canal heritage,” Mr Lane added.

Canal Boat supports CRT on this: as editor Nick Wall put it in his March 2017 editorial after the previous bash: “Which bit of ‘slow down’ over a bridge don’t drivers understand?”