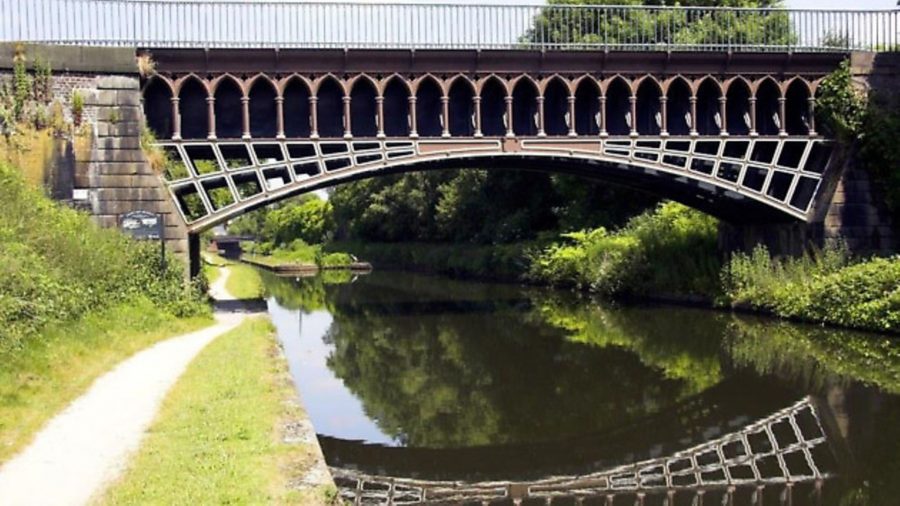 Smethwick’s 190-year old Engine Arm Aqueduct is being drained for the first time in 15 years ahead of repairs to the Grade II listed structure.

Built in 1825 by Thomas Telford, the aqueduct carries the Engine Arm Canal over the Birmingham Canal Navigation in Smethwick. Historically, the aqueduct helped to transfer a vital supply of water from Edgbaston Reservoir to ensure the canals around the West Midlands were kept topped up.

The aqueduct is a Scheduled Ancient Monument and is one of only a few canal aqueducts in the Midlands to carry a canal directly over the top of another canal.

The 52ft aqueduct was made locally by Aaron Manby at Horseley Ironworks in Tipton. The cast iron aqueduct is typical in style to other bridges across the West Midlands with distinctive gothic style arches and columns.

“The Engine Arm Aqueduct is a real masterpiece of engineering,” said Lawrence Tall, from the Canal & River Trust. “It’s been in service for almost 200 years and to this day remains an immensely important part of the region’s canal system.

“Because the structure is showing signs of its age with a few leaks, we’re putting in dams and then pumping out the water to find out exactly what work is required to keep it in service for another 200 years.

“Once we know where the aqueduct is leaking we’ll spend the next few weeks working out how best to repair it and then come back in the new year to carry out the full repair.”