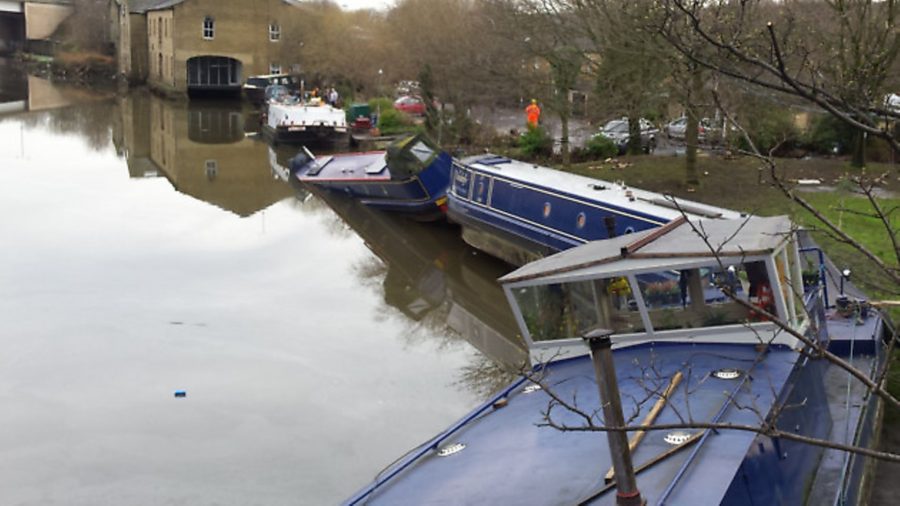 Significant damage has been caused to parts of the canals and rivers network in Yorkshire, Lancashire and Greater Manchester following the flooding of recent weeks.

Structures have been drenched and canals have over-topped, ranging from serious incidents such as landslips, erosion of embankments and structural damage to bridges, to scoured towpaths and damaged wash walls.

Flooding has had a significant impact on the eastern end of the Rochdale Canal, and the adjoining Calder & Hebble Navigation, with both facing significant repair and clean-up costs. In central Leeds the River Aire flooded, as did the disused northern section of the Lancaster Canal.

Some of the most serious damage included:

• Elland Bridge on the Calder & Hebble Navigation has suffered serious structural damage. Engineers are working with Calderdale Council on a temporary footbridge while repair options (possibly a rebuild) are assessed

• A landslip has blocked navigation between locks 15 and 16 on the Rochdale.

• The banks of the River Aire breached in Leeds and inundated the Aire & Calder Canal. The damage has been temporarily repaired with stone to prevent flooding of the canal.

“As floodwaters recede the full impact of the damage caused is gradually becoming clearer and it’s already apparent that we face a major programme of repairs,” said CRT Chief Executive Richard Parry.

“While the focus now is on planning our longer term response I’d like to pay tribute to our teams who were out over the holidays responding to issues, and also to recognise the many offers of support we’ve had from the waterways community. The response in very difficult conditions has been fantastic and our staff, contractors and volunteers have already been out cleaning towpaths and helping to restore access where possible.

“However, it’s clear that this is just the beginning and there is much to be done over the coming weeks and months to get things back to normal in those places hardest hit.”

For more details go to canalrivertrust.org.uk