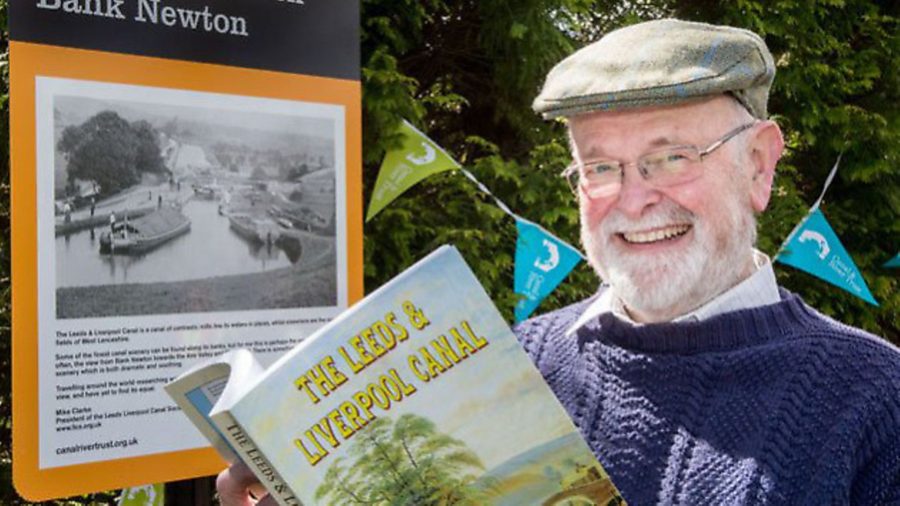 Bank Newton Lock no 38 has been re-named the Mike Clarke Lock in tribute to his contribution to the Leeds & Liverpool Canal.

At the event, Mike, 67, also launched a new enlarged edition of his popular book ‘The Leeds & Liverpool Canal, a history’.

Mike became the leading force behind the founding of the Leeds & Liverpool Canal Society in 1997 with the aim of encouraging better public knowledge and understanding of our waterway heritage. He now serves as its President, having seen the society grow into a flourishing group with more than 170 members.

The Canal & River Trust decided the canal’s 200th anniversary year would be the perfect opportunity to create a lasting tribute to Mike’s achievements by re-naming a lock in his honour.

Chantelle Seaborn, North West waterway manager for the Trust said: “Mike Clarke is ‘Mr Leeds & Liverpool’. More than anyone else, he has promoted this wonderful waterway to the public. His energy and enthusiasm have inspired hundreds of adults and children over the decades. He has generously shared his time, expertise, knowledge and resources with countless individuals and organisations, including the Trust.

Mike was invited to choose the lock that would be renamed in his honour and he decided on Bank Newton overlooking the Yorkshire Dales National Park because of its beautiful countryside.

“I have visited canals over much of the world and have rarely found anywhere that compares with the awe-inspiring view over the Dales offered by the Leeds & Liverpool Canal at Bank Newton in Yorkshire,” he said.

“To have a lock named after you is a great honour and I very much appreciate the gesture from the Canal & River Trust.”