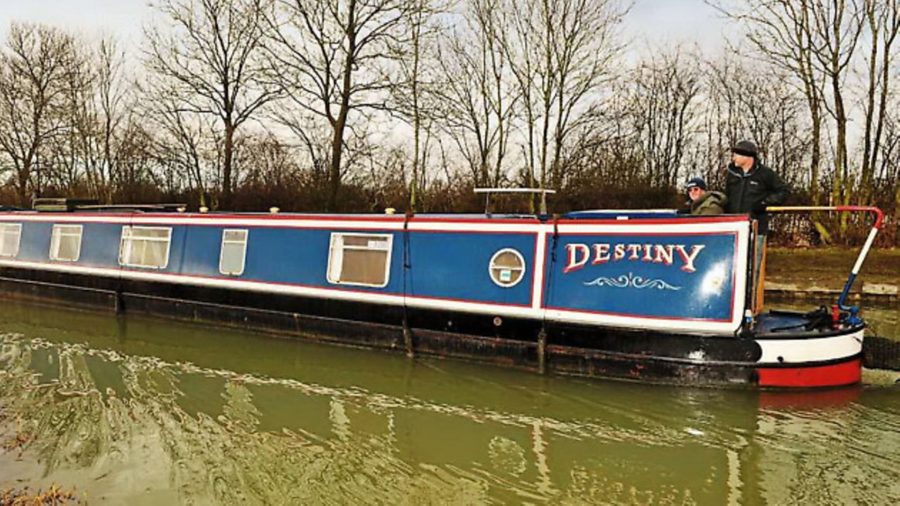 Buy a Lamborghini under the new pension rules? We reckon the smart money under the new freedoms is on using some of your pension pot to buy a boat – so we went shopping with £50,000

Some big changes to pensions come into effect this month – giving people more choice about what to do with their money. You might recall that a few months ago, the Pensions Minister, Steve Webb, hit the headlines when he said he was ‘relaxed’ if people dipped into their pension pots and bought a Lamborghini. Well, there’s probably not much use for a Lamborghini on the waterways. A car that low-slung would probably have trouble getting over the speed bumps at most marinas, it would be in danger of grounding on hump-backed bridges and it’s far too wide for most towpaths.

But the changes – which mean you can do what you want with your money, with a quarter available tax-free – might allow people who’ve always wanted a boat to buy one. For some, a brand new bespoke boat will still be out of reach (some cost about the same as a Lamborghini) so we’ve decided to look at the sort of boat you might be able to get, if you had around £50,000 to spend. It’s the kind of figure you might have available if you took some money from your pension pot and put it together with other savings.

Of course, if you’re retiring you’ll probably want to go on an extended cruise, the whole summer, maybe, or even longer; or you might want to live on board permanently for a few years. So we’ve found a previously-owned boat in the right sort of price range. It dates from 2007, and is set up for long-term cruising. And it just happens to be called Destiny, which seems ideal for a retirement boat.

The shell is arguably the most important thing when buying a boat (new or used). After all, you can change a lot inside and deal with any technical issues, but you can’t do much about the steelwork.

Destiny is on a shell by Nick Thorpe – a well respected name in the industry. The bow is a pleasing shape, there are substantial handrails and there’s nice detailing such as a plank effect to the stern deck. A great feature is an extra large hatch which is much wider than you’d usually find. It means that, when it’s fully open, this trad-sterned boat feels much more like a semi-trad and there’s plenty of room for your crew to stand. Another plus is that the paintwork is in good condition (the boat had a complete repaint last year) so you wouldn’t need to splash out on an expensive paint job in the near future. The colour scheme is an attractive blue with cream borders and bright red coachlines and handrails. The sign-writing is in a nice traditional style. This boat comes with a glazed cratch board and cover, which gives a lot of extra usable space if you’re going to be spending plenty of time on board. The well deck has lockers either side providing seating and storage, and the water tank is underneath the deck. The gas locker is in the bow. If you’re buying a boat for retirement, you probably want to be able to go anywhere; after all, you’ll most likely be having extended cruises and might not want to be limited on where you can go. This boat is a 60-footer which, in theory, rules out the Calder & Hebble Navigation and the Huddersfield Broad. In practice, though, many boats of this length have negotiated the locks by going diagonally or, in a few cases, backwards.

Destiny has a traditional layout, with the saloon at the bow followed by an L-shaped dinette. The galley is beyond and after that there’s an off-corridor bathroom, which actually has a bath. The cabin is at the stern and is one of the most spacious we’ve ever seen. The engine room also provides additional storage. The fit-out uses ash faced boards combined with oak trim. The builder’s name is given as Peter Tatton, which is not one we’re familiar with (and a search failed to turn up other boats he’d fitted out). But the quality of the work looks pretty good. Given that the boat is eight years old, it’s pleasing to see that everything still fits together nicely. The flooring is a mixture of laminate in the public parts of the boat and carpet in the bathroom and the cabin.

Steps, with storage inside, lead down from the well deck into the saloon. On one side there’s a cupboard, while on the other there’s a Villager Heron solid fuel stove set in a tiled fireplace. The saloon has free-standing chairs, so you can choose whatever furniture you like. A nice touch is the pierced radiator covers, which are each topped with a shelf. The L-shaped dinette offers additional seating. The table is on Desmo legs so can be removed when not needed and drops down to convert into a guest bed. Storage is one of this boat’s big plus points and the dinette is a good example: the base includes big drawers, so the space is easy to access.

The galley is based on ready-made units and has a good variety of cupboards, drawers and little shelves. The doors have an attractive beech finish, and there are granite worktops in a pale colour. On the aft bulkhead there’s a high level unit. Equipment includes a Stoves 500DIT slot-in cooker with a glass lid over the four-burner hob. The fridge is a 12-volt unit by Frigidaire. The window over the sink is a sliding type, which is easy to open and provides plenty of ventilation. On the opposite side, there’s a set of very wide side doors.

A bath is something many boaters crave, yet it’s not often we see a boat with one fitted. Admittedly this one isn’t full-size so you might have trouble stretching right out, but we are on a narrowboat so that’s to be expected. The bath has a mixer tap with a shower. The whole room is attractively tiled (and appears to have been re-done relatively recently) and the tiles have a nice simple motif. There’s also an extractor fan in the ceiling. The basin is on a corner unit with another granite worktop, and there’s a heated towel rail alongside. The loo is a Jabsco macerator unit. The holding tank is under the floor near the stern, which means there’s getting on for 20ft of pipe between the two (something that might cause of bit of worry for anyone who’s had to unblock one of these loos). The pump-out point is on the roof, so it’s reasonably accessible from both sides.

This is an exceptionally spacious room – probably the biggest bedroom we’ve ever seen on a narrowboat, at getting on for 14ft long. The bed is inline and, because there’s no loo tank underneath, there are drawers in the base that offer plenty of storage. Some of the space is taken up by the calorifier, though. At the foot of the bed, a large unit contains a washing machine. Beyond this there’s a dressing table with plenty of drawers which could also double as a desk if you have a computer, or need to work while on board. The aft bulkhead is taken up with a wardrobe so huge you begin to wonder whether there’s also a door to another land.

At the stern, the engine room has deckboards covered in hard wearing non-slip flooring. The boards lift easily to give access to the engine and the boat’s battery pack. The electrical cupboard is also here.

This boat is powered by the popular and well regarded Beta 43 engine. There’s also a bow thruster, a 9hp model by Nobels, with its own battery and charger.Electrical power is provided by four 110Ah batteries. There’s a Sterling charger, but an additional trickle charge comes from an 80W solar panel, mounted on the roof. If you wanted to cut down on power consumption, you could change the halogen downlighters to LEDs. There’s about two dozen, so the saving would be considerable. A 240-volt supply comes from a 1.5kW Sterling inverter; although it’s rather small by today’s standards, it should be able to power most small electrical items. There’s also a Dometic TravelPower engine-driven generator, with a 3.5kW output. This is needed to run the washing machine.

A Nick Thorpe shell and a Beta 43 is a combination that works well and gives no nasty surprises. The boat handles nicely and turns very well. It even goes fairly straight in reverse. The engine, which has just under 5,000 hours on the clock, is quiet and smooth. At the helm, the Morse control is easily within reach, as is the rocker switch for the bow thruster. What this boat desperately needs, though, is a steerer’s step, so you can stand at the right height safely within the area of the hatch rather than out on the back counter where you’re in the arc of the tiller and get in your own way when you try to turn.

The prospect of retirement can fill people with a mixture of feelings. On the one hand, you might be looking forward to never having to get up early to get the train to work; on the other, you might be wondering how you’re going to fill your time and, even more, how you’re going to live on a reduced income. And, of course, making sure of a decent income in retirement is probably everyone’s primary concern which might limit the amount you feel you can spend on the boat of your dreams. But what Destiny illustrates is that it’s perfectly possible to find a good boat well suited to long-term cruising, or even living aboard, for around £50,000. This boat was on brokerage with ABNB at Crick for £52,500, but as we know there are always negotiations and deals to be done. There are many boats in this price bracket, it’s just a matter of finding one that suits your needs – what’s certain is that, for a boater, any one of them is likely to provide far more enjoyment than a Lamborghini.