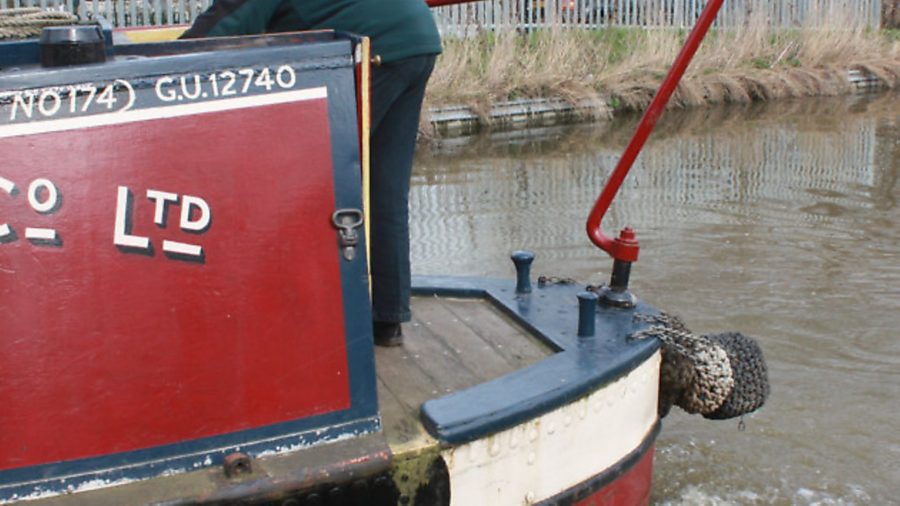 Going aground is something that’s happened to all of us boaters at some point – so Canal Boat Magazine asked Willow Wren Training for some tips on how to avoid it happening, and what to do if it does

Most of us have run aground at some stage in our boating career and we have all got free again but, could we have avoided it and could we have got off the obstacle easier and more safely?

Let’s start with a few boating facts. How deep the boats sits in the water is known as the ‘draught’ and is related to the overall weight of the boat. So the more beer you have on board at the beginning of the holiday, then the lower the hull will sit in the water, (hence the term, ‘draught beer’!)

Joking aside, on most inland waterways boats, the stern is deeper in the water than the bow. So the fact that the front of the boat floats over an obstacle doesn’t necessarily guarantee that the whole boat will get over it. This difference between bow and stern is specified when the boat is designed, but in use it is varied by such things as the amount of water in the bow tank and the amount of fuel in the stern tank. This is known as ‘trim’.

The third characteristic, the ‘list’, is the angle across the boat. The boat can sometimes be seen to list when passengers move to one side or the pump-out tank gets full if it is off the centre line.

All of these physical factors affect the ability of your boat to traverse a shallow area, but none can be changed easily so we need to rely more on avoidance.

Although the water is almost always flat on the top, the bottom of a canal or river varies quite considerably from waterway to waterway and from one spot to another. As we know, a canal is deeper in the middle than at the side, as many of us have found out when trying to moor in an isolated spot. Rivers have similar properties but are usually deeper than a standard canal and the navigable channel is often wider. However, the river also becomes shallower the nearer you get to the inside of the bend so avoid cutting corners. Keeping to the middle of any waterway, (unless signs say otherwise), is, therefore, the best policy. Sometimes, though, there’s no choice.

Many a boater has been caught out when trying to give space for an oncoming boat only to find that they have moved too far over and have run aground. The problem can then be compounded because as one part of the boat runs aground, the other end can swing out into the path of the oncoming boat, thereby defeating the initial intention. Aattempts to recover the situation can make things worse.

If you’re new to boating, the first thing to do is not to panic and take your time. The other boater will hopefully understand (probably having been in the same situation him/herself at some point) so they should stand off to give you some space.

Assuming you ran aground in forward gear, avoid the instinct to hit the power and try to drive off forwards. If the bow is touching something then it will only get worse if you try to go forward. Also, if you have run aground on one side, (as often happens), then the boat may start to list to one side which could be a real danger to people in the cabin or topside.

Assuming you ran aground going forwards, the next thing to do is to try reverse gear and back off the obstacle. If you ran aground at low speed, this will often be enough to do the trick. However, if you are stuck fast then reversing may just drag your stern, (and, therefore, propeller), into the shallow water on the same side as you ran aground in the first place. If this starts to happen disengage reverse gear and do the following, which might at first seem alien. Turn the steering or move the tiller to point the boat more into the obstacle, (ie, if you ran aground on the starboard bow then steer the bow toward starboard), and select forward gear. Increase the engine speed and the stern of the boat should slowly move away from the bank.

Keep this up until the stern and, therefore, propeller is as near to the middle of the channel as you can. You might need to use the boat pole to push the stern out if the stern is also aground or if you are up against something hard and don’t want to risk damaging the bow. With the propeller now in deeper water, it will be far more effective so reverse gear and a good level of power should pull you free. If it doesn’t work, don’t give up too soon. Keep the power on and this will flush water forward and help to re-float the bow.

Still no luck? Earlier we said that we couldn’t easily change the trim of the boat but that isn’t strictly true. If you have passengers on board then you have the ability to move some weight around. (Word of caution: be very careful how you introduce this ‘weight moving’ concept to your partner or passengers!) So if you ran aground at the bow, get your passengers to move aft. If you are stuck on the port side then get them to move starboard and vice versa. If you are going to try rocking the boat while standing on the gunwales, take great care not to let anyone fall over the side. Personally, I would use this as a very last resort and would ensure anyone doing it had a lifejacket on.

Don’t forget that the boat pole can also help you move off an obstacle, but remember that the pole is for pushing not for levering. Pushing the pole into the mud then levering against the side of the hull will break even the best boat pole and it is dangerous. Make sure you have a very good foothold and push the pole into the bed or bank and then try to push the boat off. Prepare yourself for the pole slipping and you suddenly lurching forward.

When getting to the end of the pole, stop short of the very end because it often sticks in the mud and you will need enough pole left to get a good handhold to pull it out of the mud. The best place to stand while using the pole is at the front or back of the boat where you have a good and stable standing position. Standing on the roof and using the pole is very risky.

The very last option is to get a tow from a passing boat. That in itself sounds simple but you need to take into account the breaking strain and the condition of the tow rope, integrity of stern dollies and T studs etc. That is another subject which needs more explanation than we can go into here. For now, just be advised to avoid anyone suggesting ‘snatching’ you off the obstacle. A steady pull is much the safer way.

All being well, you are now free (great sigh of relief). Reverse as far back as you can to ensure that when you select forward gear you won’t run aground again on the same obstacle. Quite often people, in their haste to minimise the embarrassment, don’t reverse far enough back and end up going through the same procedure again.

You can now continue on your merry way – but before you congratulate yourself too much, do check that no-one has been hurt by the grounding and the boat is still fully intact.

For more fragile hulls, I would check for damage before re-floating. It would be a shame if you managed to get off the obstacle only to sink shortly afterward because of a hole in the hull!

The above has assumed that you are in open water. You can just as easily run aground in a lock pound or when trying to get through the bottom gates of a lock. Here you have another ally in that you can alter the level of the pound by opening paddle gear to increase the depth of the pound or to ‘flush’ the bottom cill of the lock to gain a temporary increase in depth. Think laterally, but ensure everyone else using the locks knows what you are trying to do.

Finally, the rule of the road says that if no-one sees you do it then it doesn’t count. However, we all know the ‘law of sod’ which says that when you do run aground there will be a crowd of onlookers on the towpath and at least one will be offering you advice on what to do. By all means, listen to what the ‘towpath expert’ has to say, but follow what we have said here for a fair chance of success.