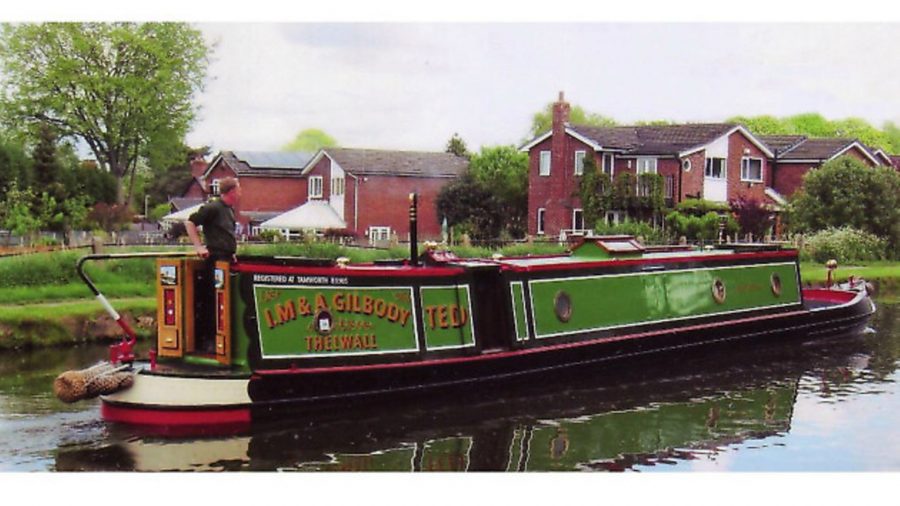 Five canal boats in 22 years, all fanatically polished by Ian, provided some happy travelling – and a profit. It seems Ian and Michelle now have their ideal boat… but will another one come along to tempt them?

My love of boating and water began way back when I was 17 in a canoe on the Bridgewater Canal; I launched it near Warrington, packed with sandwiches and a radio. I then moved on to water skiing, then bought a Fletcher Arrowflyte with a Yamaha outboard and used it on the River Weaver. I launched it at Frodsham and had some great times but, when the slipway got taken over, the ski club fees increased. I felt I could not give the time to warrant the extra fees… so what next? Speedboats can’t be launched everywhere and, by the time the boat was fuelled, car fuelled to tow it to the coast and the salt on my wheels, pounds had gone.

I was travelling home along the Bridgewater Canal and spotted a fibreglass cruiser for sale, it looked tidy and I thought “maybe”. I rang the number on the boat and, after a bit of bargaining, I’d bought a 1978 Norman 23. It didn’t have a motor, but I was allowed to take over the mooring. My wife and I spent time washing, polishing and fixing. We bought a new 15hp Suzuki outboard and then we were off. We first cruised the Cheshire Ring in the early part of the year then went for shorter weekend cruises and we both loved it.

Our next big adventure was a two-week trip to the Llangollen. The first week we had brilliant sunshine but the return trip was a bit damp, to say the least. At the end of the trip, I discovered a note in my logbook: ‘Nice trip Captain but if you want me and Ted (our toy poodle) to come again, we need a steel boat,’ signed Michelle. After 11 months of owning our Norman, we part-exchanged it (for £2,000 more than we paid for it) for a very good 40ft Hancock & Lane with a pump-out loo, big shower and a log fire. This was comfort.

PAX needed TLC so I borrowed a 40ft artic trailer. The boat was lifted out at Wincham Wharf in Northwich and taken home to be seam welded on all rubbing strakes, the whole boat was repainted and it looked fab. We had four years of great cruising on PAX then, while passing Wincham Wharf on our holidays doing the Four Counties route, a boat caught my eye – a BCN tug-style with a Gardner 1L2 in its own engine room; a fantastic looking boat called Houdini. After I pestered my wife for a week, she eventually let me put in an offer and the boat was ours. We put PAX up for sale and it sold in a week – for £5,000 more than we bought it for.

We picked up Houdini in August and our maiden trip back to Grappenhall was a little hairy as the engine took a while to stop, so manoeuvres had to be planned well in advance. We hadn’t put the right exhaust on while cruising through Preston Brook tunnel and laughed at our black faces on exit – we learned a valuable lesson that day. After some internal refitting, fitting an inverter and having the boat repainted, it looked stunning. However, after six years of ownership, I spotted another boat with a more suitable layout as we now had a little girl to add to our crew. So I rang a boat broker and Houdini sold two weeks later, for £20k more than we paid six years previously. But, by the time the boat had sold, the one I had spotted had also sold – we were without a boat for the first time in 12 years.

The search started for a Steve Hudson with a boatman’s cabin and Gardner; not an easy search. We eventually found a boat moored at Kings Bromley. All looked great apart from the fact that it housed a Beta JD3 which only had 650 hours on it. A decision was made after viewing the boat – the Beta had to go. Eclipse No.2 was bought in 2004 and we sourced a Gardner 2LW which, after a rebuild, was fitted by Tim Leach at Dutton Dry Dock. To us, Eclipse was the perfect boat.

We enjoyed cruising Birmingham, the Manchester Ship Canal, River Douglas to the Lancaster and many other waterways. But, after seven years of ownership, lots of polish and after a visit to the Crick Boat Show, I decided it was time to change. I’d spotted a Norton Canes with a tug deck and a bedroom below and a 2LW, the only problem was, it was 5ft longer which caused a problem with mooring and it wasn’t a Hudson. So we went to Steve Hudson and booked a build slot and put Eclipse up for sale, certain I could sell it with its pedigree, Gardner and all my polishing – and it sold with a profit.

I would say to all boat owners that it pays to maintain and cherish your boat. We have never lost money on any boats we have owned. I receive regular comments and ribbing about me fanatically cleaning the brasses and polishing the paintwork. It’s something I will always do – I do like to be in the shiny boat club and it certainly has its rewards. In November 2013, we took delivery of our perfect boat, Ted a 60ft tug front with bedroom below, boatman’s cabin and Gardner 2LW, all built to our design to Steve Hudson’s highest spec and his usual high standards. We called it Ted after our toy poodle who loved boating but is no longer with us. This is our fifth canal boat in 22 years, and I know this is the ONE…

Would you like the chance to bag yourself £100? Send in your story!

We’ve been fascinated by all the stories people have been sending us about their boats for our Me & My Boats pages in the magazine, so why not drop us a line to editor@canalboat.co.uk and tell us about your boat or the boats that you’ve owned.