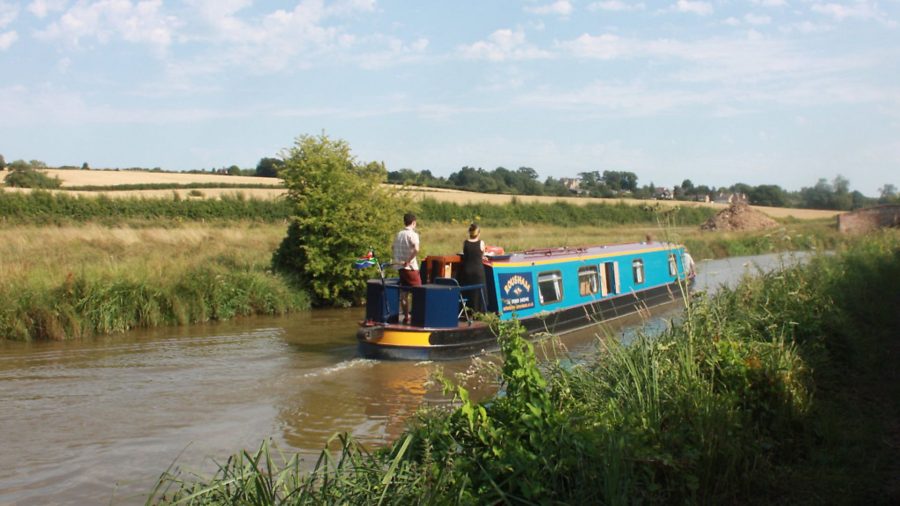 Near the centre of Banbury stands a bridge across the Oxford Canal called Tom Rolt Bridge. It’s named in honour of one of the great pioneers of the waterways revival, as this was where he began the journey in his boat Cressy which led to his famous book Narrow Boat, and to the campaign to save the canal system from abandonment. And just like him, we’re starting our journey in Banbury – but while Cressy headed north to tour the waterways of the Midlands, we’re walking southwards towards Oxford.

Almost immediately we pass Tooley’s boatyard, where Cressy was fitted out prior to the journey. It’s still a working boatyard as well as a living piece of waterways heritage, and offers public tours on Saturdays, so you can combine one with your walk.

Today, Tooleys stands rather incongruously amid the town’s Castle Quay shopping centre, with further modern developments on the way as part of the planned Castle Quay 2 scheme. But follow the towpath south, past a typical south Oxford Canal liftbridge and narrow lock, and in less than a mile you’ll be leaving the town’s shops and industrial estates behind, and heading out into the countryside.

The canal follows the Cherwell Valley (as it does for most of its southern 30 miles), with the river off to our left and a railway line beyond. A series of liftbridges, seen today as a distinctive feature which form an essential part of the canal’s character, are actually an indication that its builders were running short of cash as they struggled to complete the route to the Thames. You may see signs of a current programme of work to refurbish several of the bridges.

The observant walker might notice that the next lock, Grant’s Lock, only has a single bottom gate, rather than the usual pair – another sign that money was tight in the 1780s. You won’t need to be very observant to see signs of a more recent form of transport, as the M40 crosses the canal twice in three miles.

You’ll spot the tall spire of King’s Sutton Church ahead – but although the canal runs close to the village, they’re separated by the Cherwell, and there are no bridges. So if you’re planning to visit the King’s Sutton (and there are a couple of handy pubs) you’ll need to turn off at Twyford Bridge 177, and follow the road (or nearby footpaths) for a mile into the village. If four miles is long enough for you, there are trains from King’s Sutton back to Banbury; if you’re carrying on walking, you can continue south along the road from King’s Sutton, turning right to regain the towpath at Nell Bridge 187.

The motorway has crossed for the final time and is diverging eastwards; it’s the railway’s turn to disturb the peace as it runs close to the canal for a couple of miles. Look out for where the River Cherwell crosses the canal on the level, passing under a towpath bridge just ahead of the strange lozenge-shaped Aynho Weir Lock. Why does it widen out in the middle? The theory is that as its rise is only 1ft (its main purpose being to keep river flood water out of the canal), the chamber was widened to make sure it still sent a reasonable amount of water down the canal to supply the lower lengths.

Passing Ayhno Wharf with its boatyard and railway-themed pub (there used to be a station there, but now the trains pass without stopping), the canal is entering one of the most remote and attractive parts of the Cherwell Valley, meandering between water meadows and trees, with few roads, little sign of habitation, and just the railway for company. Somerton Deep Lock, 12ft deep in contrast to Aynho, is followed by Somerton village, then another quiet length leading to Upper Heyford, the canal interest kept up by Heyford Common Lock and the occasional farm bridge.

Upper Heyford village used to be anything but quiet (and the guidebooks warned boaters against overnighting there), but now that the US Air Force base has long since closed down peace has returned, and there’s another handy pub to visit a short walk from the canal.

A mile of meandering and increasingly wooded canal separates Upper Heyford from its sister village of Lower Heyford. Once again there’s a convenient pub in the village – to get there, cross Mill Liftbridge on the way into the village.

The canal turns a long gentle bend to the south, comes alongside the railway line, and arrives at Lower Heyford Wharf – which is right next to Heyford railway station for trains back to Banbury (except winter Sundays). The railways have clearly spotted the attractions of the canal, as they call the local service the ‘Oxford Canal Line’.