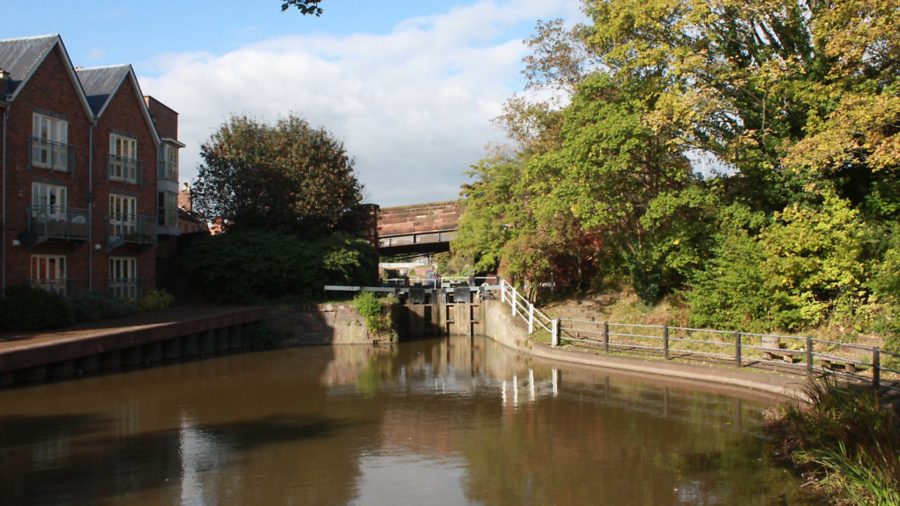 Chester is well known for the popular circular walk around the ancient city walls. But we’ve combined them with the Shropshire Union Canal and River Dee to make a rather different circuit

This month’s walk is a short one – but in its four mile circuit it manages to include a main line canal, a semi-disused branch, a length of tidal river, a few yards of non-tidal river, and a relic of Chester city’s 2000-plus years of history. And for those wanting a longer walk, you can extend it in any of four directions.

We begin at Bridge 123C, City Road Bridge – mainly because it’s handy for the railway station for those arriving by train – but this is one of the four possible extensions: you can start as far out of the city as you like, as the Shropshire Union climbs south eastwards through Christleton and towards Beeston.

This used to be a very industrial area, and not at all like the image of Chester as a historic city of half-timbered buildings and Roman remains. But it’s been transformed over the years, with old factories and mill buildings converted to new uses including the impressive canalside Steam Mill business centre.

Follow the towpath westwards into the city centre, under modern road bridges and past recent developments, until the canal bends to the right and you come up against your first sight of Chester’s ancient history. Phoenix Tower (or King Charles’ Tower) rises 70ft from alongside the towpath, forming part of the City Walls, the most complete set of surviving Roman and Mediaeval walls in the country.

The walls run alongside the canal and climb to their maximum height, while the canal remains level and enters a deep and gloomy cutting, spanned by a high bridge carrying Northgate Street and also Chester’s own Bridge of Sighs. Like the better-known (and, it’s fair to say, much more impressive) bridge of the same name in Venice, this provided condemned prisoners with their last view of the outside world, forming the link from the jail to the chapel for last rites.

The three Northgate Staircase Locks are partly hewn from the solid red sandstone rock on which Chester is built. Impressive today, they must have been ever more so when they were a flight of five heading straight down to the River Dee. But changes during the canal’s complex history mean that it now dives under a railway and takes a sharp right to reach the wide basin at Tower Wharf, the junction with the Dee Branch, and the historic Taylor’s Boatyard – where fine varnished wooden cruisers were once built, and now enjoying a new lease of live as a fully operational boatyard.

This is your second opportunity for an extension to the walk – you can carry on as far out of Chester on the route towards Ellesmere Port as you like. But to continue the circuit, take a sharp left by the drydock and turn back on yourself to follow the Dee Branch. This formed the canal’s link with the river, but the river lock has been out of use indefinitely for some years (see our restoration article, CB Dec 2013) so the branch only sees the occasional use by boats that moor there. You’ll need to take to the streets briefly as the bridge below the second lock lacks a towpath, but you can rejoin it and follow the rest of the short Branch between modern housing (complete with new liftbridge) to the river lock.

This is your third opportunity to extend the walk: you can turn right onto New Crane Street (which spans the lower lock chamber) and bear left onto a footpath which follows the Dee tideway all the way down to the estuary (where it links to the Wales Coast Path). To continue our walk around Chester, turn left onto New Crane Street, and then right into an access road between modern housing to gain the riverbank.

You’re now on the tidal River Dee, a muddy channel at low tide but used by seagoing craft for access to Chester. Accompanying you on the left, and separating the city from the river, is the Roodee, a large area of floodplain which has for many year’s been home to the Chester’s racecourse.

The river is spanned by the impressive single-span Victorian Grosvenor Bridge and the Mediaeval Old Dee Bridge as it approaches the city once again. The latter provides a fine view of the 11th century weir, built to provide power to mills and to improve navigation. It still fulfils the second function, maintaining a navigable level for the various trip-boats and small craft based on the length above – although it means that they can only escape to the tideway when a high tide overtops the weir. You can also see the curious ‘water gate’ which can be opened at level water to provide slightly more depth over the weir.

This is your final chance to extend the walk: cross the old bridge, turn left, and you’re on a riverside path which extends right up the navigable length (not that you’ll see many boats) to the effective limit of navigation at the twin villages of Holt (on the Welsh bank) and Farndon (on the English).

Otherwise, leave the river at the old bridge, climb up onto the City Walls, and follow the ancient Roman and Mediaeval defences for just over half a mile, to just before Phoenix Tower, where some wooden steps lead down on your right. These take you to the canal towpath, just a few minutes’ walk from where our walk began.