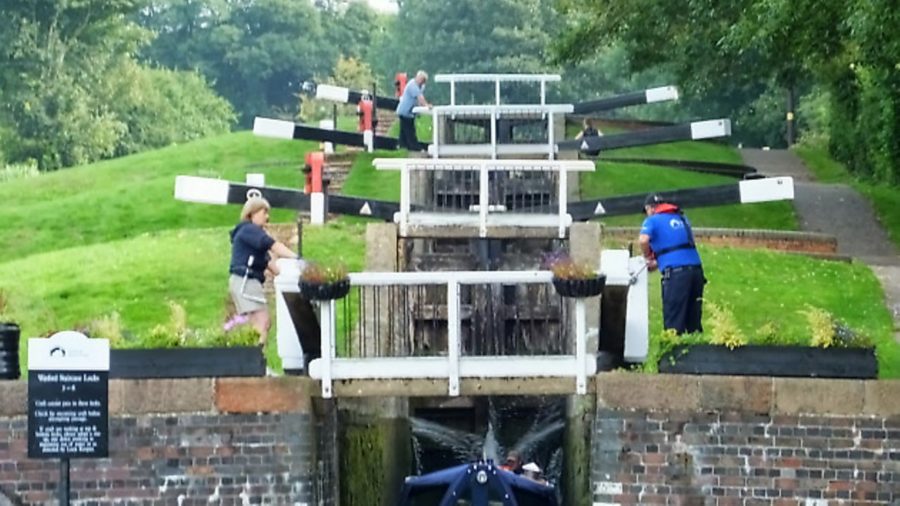 The winter boating season is looming but, before then there’s plenty of time for exploring accompanied by a Cornish Saint

The seasons fly by. As I write, we are fast-approaching preparation time for winter cruising. Of course, you are reading this in the winter months; so maybe reading about the our autumn cruising will inspire you to get out on the water again.

The winter boating season begins for the Canal & River Trust in November. Winter mooring permits are available from November to March and it will be interesting to see how the new permits allowing boats to move their “winter moorings” work out.  I suspect they will not affect us much as we are always on the move anyway. Autumn and early winter is one of the best times on the cut – we enjoy the quieter days and sometimes lovely weather.

Epiphany has had her oil change – the skipper does not look forward to that job as he is rather big to get in the engine hole. However, he has a diesel course under his belt and plenty of practice now, so he always does a good job.

Epiphany’s travels took us north from Braunston in the company of good friends on their narrowboat Petroc, named after a Cornish saint. We locked up the wide Grand Union locks together and, at Norton Junction, turned on to the GU’s Leicester Arm.

We had the narrow locks at Watford and Foxton ahead. Watford Locks are often a bottleneck as there are two single locks, four staircase locks and another single. Operated by CRT volunteers, there is a strict booking system and boats that do not book in do not go! We had a wait as six boats were let down the staircase, with help from our crews and, by the time we arrived at the top, there was another queue waiting to go down. The locks are very well looked after and the side ponds look like havens for wildlife.

A stay at Crick brought back memories of the Crick Boat Show, but it all seemed rather empty without the marquees and hordes of people dreaming about a new narrowboat.

We took a first trip down the lovely Welford Arm, once used for transporting lime and coal for the limekilns in the basin at the end. A good pub, two small marinas, a small village with a post office and even a bookable bus service to Market Harborough kept us there for a couple of days.

The new “honeypot” mooring regulations had just begun at Foxton, so we were interested to see why they were needed and how they worked. We moored before the visitor moorings – a 14-day option. New signs proliferated on the visitor moorings above the locks: two days only with a £25 overstaying charge – they were almost empty. We were assured by CRT volunteers that the day before it had been very busy.

Leaving Petroc behind, we cast off early with my cousin Tony aboard and were seen down the staircase locks by the volunteers. We have visited Foxton many times over the years, both by boat and car. It is now much more manicured and managed than back in the 1970s and 80s; with the museum, refurbished pub and cleared inclined plane site, it is even more a tourist attraction.

It is many years since we have been down the Market Harborough Arm. So, at flight bottom, we turned right, with me at the helm. I had not done my research and was initially confused by the new swingbridge and restored inclined plane arm. However, avoiding the moored boats meant a slow approach and we were seen on our way by a kind “bridge opener”. Our nostalgic trip ended at the sani-station at Union Wharf, though we still think of it as Market Harborough Basin, where we hired from in the 1980s. It is all restored with pub and apartments and is now home to Canal Boat Cruises. By the time we returned to the main line, the moorings below Foxton locks were full but a rough overnight mooring, with our stern in the reeds, suited us.

Next day it was onwards to Leicester with Saddington Tunnel, a Site of Special Scientific Interest (SSSI) and the navigation becoming more river-like. We had a date with some more boating friends at Kilby Bridge; this month was becoming a continual round of socialising. Petroc, which was now in front of us, acted as forerunner in Leicester and let us know where best to moor, staying a day or two ahead of us.

I was looking forward to Leicester as I wanted to find out more about its Richard III dig and discovery. Negotiating the impressive Freeman’s Meadow Lock and passing through the Mile Straight was as  I remembered from 2004. The pontoon moorings at Castle Gardens, although not what we would normally choose as a mooring, are handy to walk into the city. Leicester had a bad reputation once but has improved, though the northern outskirts still felt shabby and neglected. My interest in Richard III and plans for a memorial in the cathedral satisfied, we were glad to leave.

The navigation finally becomes the River Soar at Belgrave Lock, a pretty location overlooked by the National Space Centre. Most of the locks are in pretty locations and we had a pleasant few days in benign conditions. For me it cannot compete with the River Avon but, as we neared the junction with the Trent, the flood locks, emergency moorings and wide floodplain with water meadows all emphasised the potential dangers of river cruising. An eye on the weather, the river level markers and signs is necessary in all weathers.

Our last ‘town’ mooring was Loughborough. Initially we moored on the main line, but the Basin with pontoons is much closer to the shops and a couple of national supermarkets. The boaters’ services are not what I would call accessible, being up ladders! We were thankful that another boating friend was moored there, who gave us a hand as we chatted. Loughborough was not really one of our favourite towns but has some parks, a museum, bell foundry and carillon.

The Trent continues left and we did the same. It is only about a mile to Cavendish Bridge where the navigable Trent ends. It was once possible to reach Shardlow and Burton upon Trent, but the coming of the Trent & Mersey put paid to the river trade. We returned to the Trent & Mersey, but it was not a good start as we were held up at Derwent Mouth Lock. A boat had damaged one of the top gates, lifting the pintle out of its cup. CRT were quick to bring a bottle jack and it was repaired before the queues became too bad.