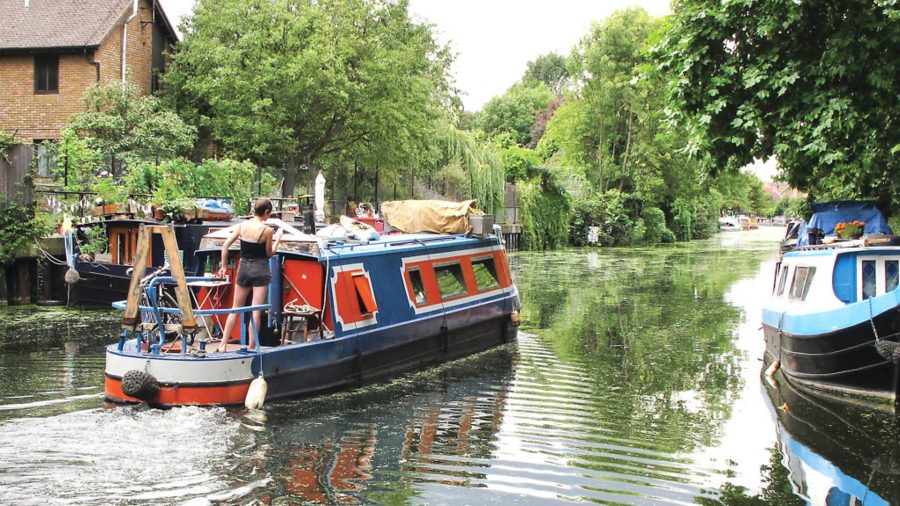 From Little Venice we follow London’s canal past the crowds at Camden Lock and through the less well-known lengths further east to reach Limehouse, the Olympic Park, and London’s newest waterway ring

A recent travel programme on television spotlighted the Regent’s Canal and described it as “One of London’s Best Kept Secrets”. This may seem a dubious claim if you are among the crowds at Camden Lock, but otherwise it could be a fair comment on the nine-mile link from Little Venice to the Thames in East London.

The lock-free section between Little Venice and Camden opened in 1816, so it has just celebrated its 200th birthday. The remainder of the canal to the Thames at Limehouse was completed in 1820. In its working heyday, the waterway provided an important link from London’s Docklands to the main canal system. Coal, timber and agricultural produce were carried in huge quantities. Since the 1970s it’s been the preserve of leisure craft, and particularly in recent years residential boaters.

We begin our journey at Little Venice which is a triangular shaped pool, conveniently situated close to Paddington railway station, where the Regent’s Canal meets the Paddington Arm of the Grand Union. This is a busy boating location at most times of the year, but it becomes very lively during the early May bank holiday when it hosts the Canalway Cavalcade (see our news pages). The pool is overlooked by a number of fine Regency houses which are in complete contrast to the huge modern developments which flank the nearby Paddington Basin. A waterbus service operates from Little Venice to Camden Lock via the London Zoo.

The Regent’s Canal begins beneath an elegant road bridge, beyond which a line of moorings brings you to Maida Hill Tunnel, soon followed by another shorter tunnel at Lisson Grove. Soil excavated in the building of these tunnels is said to have been used to build the nearby Lord’s cricket ground.

Look up underneath Bridge number 8, which contains the culverted River Tyburn within its brickwork – the clue is a V-shaped groove under its arch. The next bridge is the celebrated Macclesfield Bridge popularly called ‘Blow-up Bridge’. In October 1874 a barge full of gunpowder exploded beneath the bridge, killing all its occupants. The bridge was subsequently rebuilt using the original supporting cast iron pillars (but turned the other way around, as evidenced by the grooves worn by boats’ towropes, some of which are on the ‘wrong’ side). Then comes London Zoo with Lord Snowdon’s aviary towering above the water. Only water buses are allowed direct access to the Zoo from the canal at a special stop, so boaters wishing to visit must find a mooring further on and walk back to join the queue at the road entrance.

After the Zoo the canal takes a sharp left turn by a floating Chinese restaurant. Soon you will pass the castellated Pirate Castle which is the headquarters of a youth activity centre.

Next to come is Hampstead Road Lock which marks the end of a long pound stretching right back to Cowley near Uxbridge on the Grand Union main line, some 19 miles away. Better known as Camden Lock, this area is usually thronged with crowds of onlookers enjoying the adjoining markets (see inset).

A short flight of locks takes the canal to St Pancras where it’s crossed by a number of railway bridges including one carrying Eurostar services. St Pancras Basin is the headquarters of the St Pancras Cruising Club.

By St Pancras Lock is the unusual sight of a housing development built within the framework of an old gasometer re-erected across the canal from its original site. This length of canal running behind St Pancras and Kings Cross stations has been attractively redeveloped and has become popular with visitors. Also popular is the London Canal Museum at Battlebridge Basin. Housed in a converted ice warehouse, the museum tells the story of the capital’s waterways (see inset).

Soon comes the half-mile long Islington Tunnel which has no towpath, but there are markers to show the way for walkers to follow the route over the top, which passes through a street market. The canal emerges into a fine wooded cutting flanked by the gardens of terraced houses before City Road Lock.

City Road Basin, which branches off on the right, is a large expanse of water backed up by an impressive array of new tall buildings on the north edge of the City of London. This was once a busy commercial centre thronged with working boats. Now the basin is often occupied with youthful canoeists from the local boat club.

The Narrow Boat Inn can be seen opposite Wenlock Basin which is mostly used for moorings. The canal continues eastward through an intensely built -up area to Kingsland Basin which has extensive moorings.

Next comes Victoria Park which is flanked by two canals: the Regent’s and the Hertford Union, which forms a short cut to the River Lee avoiding the run down to Limehouse Basin. The park, with its excellent lakeside cafe and pagoda is a green gem set in the heart of London’s East End. It was once known as ‘The People’s Park’ because of the political meetings and rallies which took place here. Now it hosts numerous annual festivals and musical events. The Hertford Union Canal runs alongside Victoria Park for most of its length, descending through three locks before joining the Lee Navigation.

We’ll stay on the Regent’s Canal, passing Mile End Park which is a narrow strip between the canal and a main road but contains an ecology park, an art pavilion, a stadium, a wildlife lake and areas of grassland with wild flowers in summer. The park was created from a former industrial area which was subjected to severe bombing during the Second World War.

Next, the canal passes the Ragged School Museum (see inset), before descending through the last couple of locks to reach Limehouse Basin, now housing a marina with extensive moorings and overlooked by the Docklands Light Railway. Formerly known as Regent’s Canal Dock, it provides the link to the Thames via a tidal entrance lock. It handled produce and raw materials from all over the world, as well as coal and British made goods transported via the canal system.

It was busy until the late 1960s but closed to commercial traffic in the 1970s despite the construction of a short new link to the Limehouse Cut, avoiding the need for a separate tidal lock for the Cut.

Today’s boaters use this new link to access the Limehouse Cut which is about a mile long, totally built up throughout its length, and leads to Bow Locks.

Bow Locks form another connection to the tideway, via the tidal Bow Creek which twists and winds down to the Thames. They also mark the start of the River Lee Navigation which runs for 27 miles to Hertford. The area above the locks is known as Three Mills: the House Mill was built in 1776 and is Britain’s last remaining tide mill; the adjacent Clock Mill is another listed building; the third mill no longer exists.

Having begun our journey amid the Regency surroundings of Little Venice and Regent’s Park; we end them in one of London’s newest open spaces, as we turn right above Bow Bridge to enter the Queen Elizabeth II Olympic Park’s waterways, rebuilt from the former Bow Back Rivers for the 2012 Olympic Games. Previously an obscure and in places derelict network of waterways hidden away from the main waterway network, they have now reopened after closure for the Games, with two restored locks opening up more routes.

Entering via St Thomas Creek from the Lee, you can cruise a circuit via the City Mill River and Old River Lee, passing the former Olympic Stadium, now the controversial new home of West Ham United football club, as well as the London Aquatic Centre and the futuristic ArcelorMittal Orbit, before leaving the Olympic Park returning to the Lee below Old Ford Locks.

Another short new circuit has now been made possible by the reopening of City Mill lock followed by the recent restoration of Carpenters Road Lock. The lock is interesting from an engineering point of view, as it has the only ‘double radial guillotine lock gates’ in the country. Built in the 1930s its design includes two curved gates that pivot on hinges set in the lock walls, rising to enable boats to pass under. From Carpenters Road Lock you can pass through the Waterworks River to return to St Thomas’ Creek at the more conventional City Mill Lock, completing London’s latest new cruising ring.

Must see: London Canal Museum. Housed in a Victorian former ice warehouse, the museum tells the story of London’s canals and the boats, people and cargoes that they carried. Climb into a working boat cabin, discover London’s lost canals, see a display of horse-boating, and find out about the ice trade which was the reason for the building’s existence.

See also: Ragged School Museum This museum, set in a former free school for poor children set up by Dr Barnardo, features a Victorian schoolroom in one of the original classrooms, a re-created East End kitchen from the year 1900, and a gallery showing life in Victorian East London.

See also: Camden Lock Market: The cosmopolitan markets that stretch out through the streets in all directions from the lock have become a ‘must-see’ location for London visitors. The shops and stalls appeal to all tastes whether they are alternative or conventional, from clothing to exotic foods.