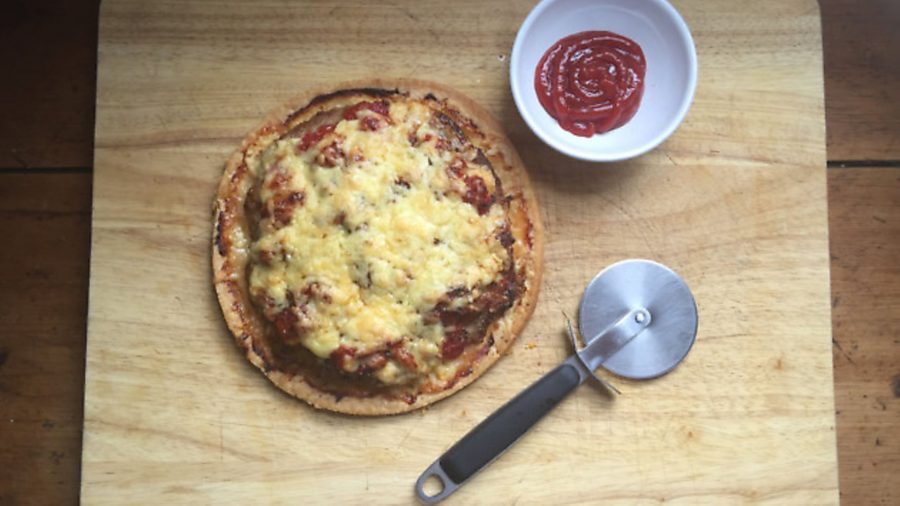 This recipe is quick and easy, especially if you use a frozen short crust pastry. You will need an oven proof dish of about 8 or 10 inches.

1) Make the pastry by rubbing the butter into slightly salted plain flour. Once the flour looks like breadcrumbs, add one tablespoon of cold water at a time until the dough is formed.

2) Place the dough on a floured worktop and roll it out to fit the dish. Turn the oven to gas mark 6 (200 degrees Celsius, 400 degrees Fahrenheit).

3) Take the sausages or sausage meat and form it gently to shape on a floured surface and place over the pastry.

4) Drain the juice from a can of chopped tomatoes and spoon them over the sausage. Sprinkle over some mixed herbs and place in the bottom of the oven for about 30 minutes (this keeps the pastry base crisp).

5) Remove from the oven and sprinkle a good layer of cheese over the top of the tomatoes and return to the top shelf for a further 10 minutes until the cheese has melted and browned.

6) Serve with salad and lashings of tomato sauce. If you manage to leave a couple of slices, they are delicious for picnics and packed lunches.

We used to moor our first boat, many years ago, at St Ives near Cambridge. Jones’s Boatyard was the best location for boaters in the area. They had a big chandlery, sold fuel and had a large brokerage. And dished out advice as well as service.

In our early days, narrowboats didn’t really feature on local rivers. There was just a solitary tug moored among mostly plastic cruisers like ours, a Freeman 23. Eventually, the Freeman was deemed too small for our needs and we bought our 1933 wooden Broads cruiser Venus. We fancied a change of scene too, which took us to Westview Marina at Earith near Ely, Cambridgeshire. Elaine and Les, who had recently taken on the rundown site, were welcoming and friendly and helped us as we restored our lovely wooden boat to her former glory.

We got to know the River Great Ouse intimately. From Earith we’d always turn left, cruise to Ely and enjoy an Indian take-out or fish and chips moored on the riverside. If time allowed, we would head on to the River Lark where we could enjoy ice creams from the Prickwillow pumping museum or as far as the River Wissey, where we swam in its clear waters. Simple pleasures and happy, memorable days.

Eventually Venus was upstaged by our first narrowboat, Star, which we moored at Bill Fen Marina on the outskirts of Ramsey near Peterborough. Over the years, John and Lynn Shotbolt had turned the flat fenland land into a landscaped marina paradise of undulating hillocks, ponds, trees and hedges. No-one who has been there will forget the site’s beauty – the big skies, spectacular sunsets and sunrises.

Now that we live on Harry as continuous cruisers we don’t have to worry about a base but I wonder if modern marinas could match the charm of our old haunts.

This recipe is one I often put together throughout our family boating past as a simple and tasty dish to feed hungry young stomachs after a day in the fresh air. Next to fish and chips, this scrummy sausage pizza was the most requested meal.