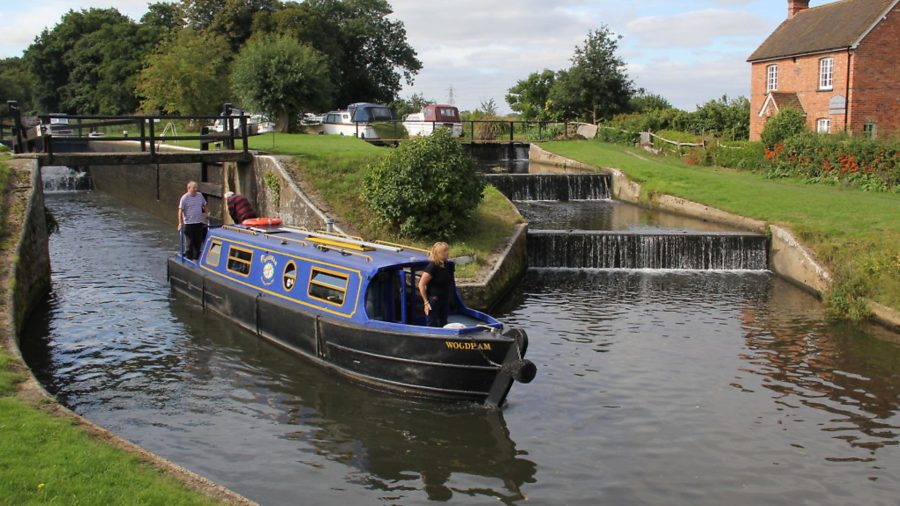 10 of the best pubs on the River Wey Navigation

The River Wey Navigation is one of our earlier waterways, built during a turbulent time in English history following the Civil War. King Charles II was in hiding and the country was ruled by Cromwell’s Protectorate Parliament.

The navigation was planned by local landowner Sir Richard Weston, who died in 1654 before it was opened. The 15-mile waterway, which connected Guildford to the River Thames at Weybridge, passed through twelve locks and involved digging about ten miles of artificial channel. A four-mile extension, called the Godalming Navigation, was added in 1764. Further connections were added when the Basingstoke Canal (1796) and the Wey & Arun Canal (1816) opened, both with junctions with the Wey navigations.

The waterway was prosperous for many years, carrying agricultural produce, flour, paper, timber and gunpowder. Distinctive ‘Wey barges’ capable of carrying 80 tonnes were built at Dapdune Wharf in Guildford by William Stevens & Sons, who later owned the navigation.

In the 1960s Harry Stevens, son of the earlier owner, passed on the ownership of the Wey Navigation and the Godalming Navigaton to the National Trust. The last regular commercial traffic was still taking grain to Coxes Mill but this ended in 1969 (although it was briefly revived some years later), and today the river navigation is used for pleasure boating.

The river is not dramatic in terms of structures or surroundings as there are no aqueducts, tunnels or long flights of locks. But other than at Guildford where the navigation passes through the centre of town, it follows a peaceful rural course through the Surrey countryside.

The entrance to the Wey is via a well signposted maze of Thames backwaters below Shepperton Lock. A single extra gate, which enables boats to pass into the navigation when the Thames water level is low or they are deep-draught craft, leads to Thames Lock. A cruising licence can be obtained here from the National Trust, who have an information display in an old stable block.

After Thames Lock, you’ll find yourself cruising through the affluent town of Weybridge where you could shop in the town centre near the Town Lock. But then the town is left behind and the waterway reaches Coxes Lock and the adjacent mill, which was built in 1776 as an iron mill but became a corn mill in the 1830s. It continued working as a corn mill until 1982 after which it was converted into housing.

Not long afterwards you’ll reach New Haw Lock which has a waterside pub and restaurant. A long straight section with offside moorings leads to Woodham Junction where the Basingstoke Canal begins its 30 mile journey beneath the noisy elevated M25 motorway. But soon the sounds of the motorway are left behind as the waterway enters a lovely wooded section leading to Pyrford Marina and the popular Anchor Inn. A footpath from Pyrford Lock eventually reaches the Royal Horticultural Society’s Wisley Gardens. It’s a two-mile walk but worth it especially since Wisley’s recent £70m upgrade.

From Pyrford a pleasant wooded sections leads to Walsham Flood Gates, a lock which stays open at both ends except in times of flood. Afterwards the waterway progresses through wooded countryside to the attractively situated Newark Lock. The flint ruins of Newark Priory can be seen on the natural river channel opposite Newark Lock. The priory was founded in the 12th century by Augustinian monks, but the ruins stand on private property and are not open to the public.

Next comes Papercourt Lock with its stepped weir in a very attractive setting. The waterway continues on its pleasant wooded course to Cartbridge where there is a pub and Send village is just a short walk away. The navigation’s workshops are next to Worsfold Gates, another flood lock.

Triggs Lock has an attractive cottage surrounded by woodland and open fields. Until you look at a map it is difficult to believe that the towns of Woking and Guildford are so close by. The navigation continues along a winding course around Sutton Place with two sharp turns at Broad Oak Bridge and Bowers Lock. Sutton Place is a Tudor manor house which was once the home of Sir Richard Weston, who originally visualised the Wey navigation.

The outskirts of Guildford are becoming more apparent as woodland begins to give way to urban development. Stoke Lock marks the entry into the town, with houses and gardens stretching down to the waterside. There is a riverside park near Stoke Lock followed by another at Woodbridge Meadows.

Then comes Dapdune Wharf, former home of the Wey barges that once carried cargoes from Guildford to London’s docks. The wharf now features a visitor centre run by the National Trust (see inset) telling the story of the river. You can also take a relaxed passenger boat trip from here and enjoy Guildford’s riverside views.

Guildford Cathedral, set in 20 acres of parkland, can be seen on a hilltop close to Dapdune Wharf. In 1830 William Cobbett described Guildford as “a most agreeable and happy looking town” in his Rural Rides. There is a bit more traffic around today but nevertheless Guildford is worth an extended visit with plenty of places to see and visit.

A tribute to author Lewis Carroll (who lived and died in Guildford) can be seen in the riverside gardens at Millmead. It is a bronze statue of Alice with her sister depicting the opening scene of Alice in Wonderland. Visit the Yvonne Arnaud Theatre which has a riverside restaurant. Debenham’s also have a restaurant where you can sit, eat and watch the boats pass by, but the store is under threat of closure in 2020.

Guildford Castle was built in the early 11th century and became the royal residence of Henry III until his death in 1272. It was purchased by the Guildford Council in 1885. Today it has a visitor centre and beautiful gardens. The castle can be reached from Millmead Lock. There are great views of the town from the top of the Great Tower.

After Millmead Lock you will begin to leave the town with fine views of St Catherine’s Chapel high on a wooded hillside. The chapel was built in the 14th century and was the subject of a painting by J.M.W.Turner in 1830. A footbridge marks the former crossing point of St Catherine’s Ferry, which was once part of the Pilgrims Way.

At Shalford the entrance to the former Wey & Arun Canal branches off. This area is known as Gun’s Mouth Junction because of former gunpowder wharves. Cargoes of gunpowder were taken by barge from Chilworth Powder Mills to Woolwich Arsenal and Purfleet until the mills closed in 1920. The canal was built in 1816 and is often called ‘London’s lost route to the sea’ (also the name of a well-known book detailing its history) as it formed a through route to the Arun which came out at Littlehampton on the south coast. It closed in 1871 and fell derelict, but thanks to the efforts of the Wey & Arun Canal Trust over many years, it is gradually being restored, and several sections have been completed.

The final two miles between the Wey & Arun Canal’s junction and Godalming passes through idyllic cruising countryside with wooded hills forming a lovely backdrop to the gentle winding waterway. Catteshall Lock, situated about a half mile from the wharf, has the distinction of being the most southerly lock on the linked waterway system (until the Wey & Arun Canal is reopened, that is!) It stands next to Farncombe Boat House where boats can be hired weekly or by the day.

Godalming Wharf is the most southerly point on the connected network. The town has been an important trading place since the Middle Ages, as it is approximately half way between London and Portsmouth. The arrival of the navigation in 1764, with its water link to London, only added to the town’s importance. Today, the only original surviving building at Godalming Wharf is a barn that was built in 1768. The wharf once had ten acres of warehouses – a huge area, but now considerably reduced by supermarkets and car parks. Commercial traffic ended in 1925 and now a horse-drawn trip boat operates from here in the summer months. Take your time at Godalming before turning for a pleasant return journey back to the River Thames.