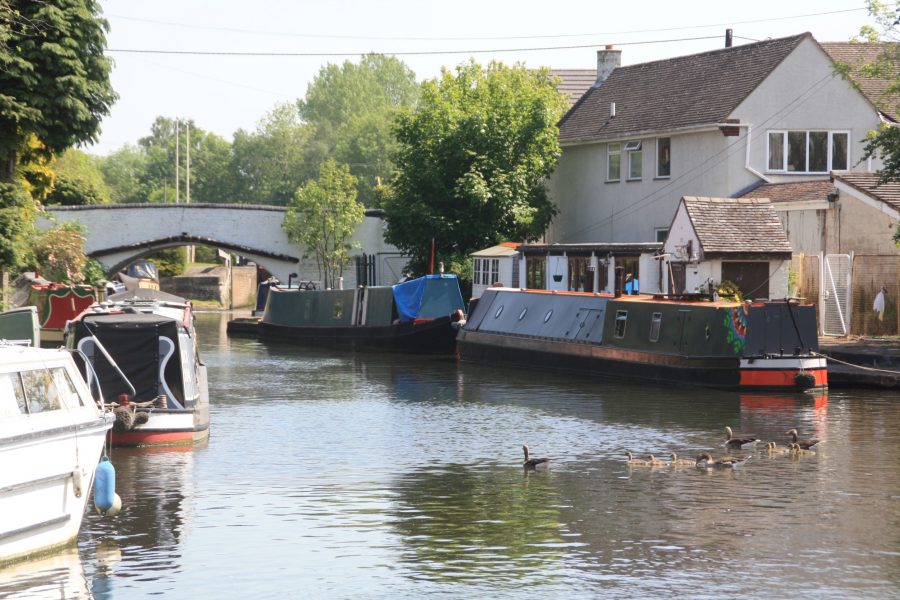 Martin Ludgate tracks down three former branches of the Staffordshire & Worcestershire Canal, all with an interesting history and two with a possible future…

Most major canals boasted at least one branch canal, typically built to connect the main line of the canal to nearby towns, industries or other waterways. The Staffordshire & Worcestershire Canal had three, of which one served each of these three purposes, but none of which survive as navigable routes today. However all three of them have interesting and varied histories, two of them are the subject of proposals which foresee them having a future as navigable waterways, while in the meantime there are varying amounts to be seen of all three of them for the passing boater who ties up and goes exploring.

And if you’re cruising the Staffs & Worcs canal, see our cruise guide

Cruising westwards from the start of the Staffs & Worcs at Great Haywood Junction, after four miles or so it’s possible – if you know what you’re looking for – to spot two short sections of brick wall half buried in the towpath hedge. These was the surviving abutments of a long-demolished bridge which once carried the towpath over the entrance to the canal’s Stafford Branch – and until a few years ago they were pretty much all that was to be seen of it. All that’s changed now, thanks to the activities of the Stafford Riverway Link project, which has made a great deal of progress towards one day reopening the Branch. But before we look at the future, let’s look at the past… Two fragments of brick bridge abutments, a length of piling and a new signpost mark where the Stafford Branch began

Stafford was a sizeable county town which had been bypassed by the canal, and was feeling the impact of this as the cost of carrying coal by horse and cart from a wharf a mile away kept the prices high in the town. The first proposals for a branch of the canal leading into the town came in the 1790s, some two decades after the canal had opened; but the idea was dropped and instead a horse-tramway was opened in 1805 connecting the town to a wharf on the canal. It wasn’t a great success financially, and the idea of a canal link was revived – helped by the fact that in the meantime, the formerly meandering River Sow had been straightened to flooding, and would provide a suitable route for the canal. So the Stafford Branch was built in the form of a short cut just a couple of hundred yards long, which left the main canal at Basford, crossed the River Sow’s tributary the River Penk on an aqueduct, descended through a lock, and joined the River Sow. Boats turned left into the Sow, which was made navigable for a mile into the town centre. The Stafford Branch used to end here in the town centre. If Stafford Riverway Link’s plans come to fruition, it will once again

Apart from its use of the river, another oddity was that the branch wasn’t officially part of the Staffs & Worcs – it was owned by Lord Stafford as the local landowner, initially leased to a local colliery company, and later to the canal company. Trade to Stafford came to an end around the time of the First World War, when the lease expired in 1927 it wasn’t renewed, and by 1939 the entrance to the canal had been blocked up. In the 1970s the aqueduct, the lock and the towpath bridge over the junction had all been demolished, and there was little left to see.

But after a couple of proposals to reopen the branch, beginning as early as the 1960s, the current group was set up in 1997 and established as the Stafford Riverway Link Community Interest Company in 2009. More recently its volunteers have begun work on recreating the first length of canal (actually a small basin) leading from the junction with the main line to the approach to the aqueduct. But instead of reinstating the aqueduct, the plan is for a new lock to lower the canal into the River Penk, which boats will then follow for a short distance to its junction with the Sow, which will be cleared to enable them to return to Stafford. On the practical side, the basin is nearing completion – and has been built to larger dimensions than the original basin, so that space can be let out as moorings, generating some income for further restoration. And on the political side, planning permission has been obtained and fundraising has begun for reinstatement of the entrance and towpath bridge.

It’s easy to see the work in progress from the towpath; if you want to explore further there’s a footpath which crosses the watermeadows to the River Sow, and follows it all the way into Stafford. It’s an attractive route into town for visiting boaters – and a foretaste of what could one day be an interesting diversion by boat. To find out more about the Stafford Riverway Link and its plans, click here.

Meanwhile back on the main line, some ten miles further south near Calf Heath you’ll pass a rather more obvious sign of another former branch canal, in the form of an arm leading off through a bridge to a lock, beyond which a marina has been created.

This was Hatherton Junction, the start of the rather longer Hatherton Branch, which once formed part of a through route to the northern parts of the Birmingham Canal Navigations network. The first part of the Hatherton Branch is used for moorings, and the first lock (just visible beyond the bridge) gives access to a marina

It too had a couple of historical quirks. Firstly, there was no such place as Hatherton: the branch and junction were simply named after Lord Hatherton, the chairman of the Staffs & Worcs Canal Company. And secondly unlike most canals it was built without an Act of Parliament (which authorised the issuing of shares and the compulsory purchase of land), the canal company simply buying the land by negotiation, and funding the work from its healthy profits.

It was a latecomer: the three and a half miles and eight locks, climbing to a coal loading basin on the edge of Cannock Chase, were opened in 1841. In 1863 the Churchbridge Locks Branch, built jointly by the S&W and BCN companies, continued from there via a further 13 locks to meet the Cannock Extension Canal. Top end of Lock 3, one of eight locks on the Hatherton Branch climbing towards Cannock Chase

Late to open, it was also late to close. In fact the Hatherton Branch was still busy with coal boats heading from Cannock to Stourport Power Station until 1949, some years after the northern end of the S&W main line had lost its last regular trade. Sadly although the route lasted into the early days of the canal revival, it shut in 1955, and the Churchbridge Locks were destroyed by opencast mining.

This might have looked like the kiss of death for any prospects of reopening the line, but the Lichfield & Hatherton Canals Restoration Trust thinks otherwise. Although its other main project, the Lichfield Canal, has taken priority in recent years, the Trust still has a plan for the Hatherton, including a major diversion along a completely new route avoiding Churchbridge Locks and joining the Wyrley & Essington Canal further west of the original link. And on the practical side, some work has been done on the surviving section including restoring a bridge at Roman Way, while a major publicity campaign secured provision for the restored canal where the M6 Toll motorway and associated roads cross near Churchbridge.

Reopening is a long-term hope, but in the meantime it’s possible to explore the first three miles on foot – and appreciate the challenges faced by LHCRT.

The first lock survives and provides access to the marina, while the second has been adapted into a dry-dock (but please don’t stray onto private land to explore these – you can see them from the first bridge). Surviving bridge on the Hatherton Branch

A road parallels the canal to where it meets one of the more serious obstructions – an embankment carrying the M6 motorway across it with no bridge. But beyond there the canal continues, much of it in water and accompanied by a towpath, as far as the restored bridge at the Roman Way Hotel which gives access between the towpath and the A5 main road.

To find out more about the Hatherton Branch and to support LHCRT’s restoration plans, see the Trust’s website.

You’ll need to contunue your cruise for nearly 30 miles, almost to the end of the canal, before you see the remains of the third of the Staffs & Worcs Canal’s arms – and you won’t have any trouble spotting this one. Half a mile beyond Falling Sands Lock, and just a couple of miles short of Stourport, on a right-hand bend, a brick arch carries the towpath over what was clearly an old arm of the canal. In traditional Staffs & Worcs house style, a large oval iron plaque indicates that this was Pratt’s Wharf Bridge, Number 10a. It was the start of a short arm which provided access to Wilden Ironworks, a mile away. Once again, this branch had the odd curiosity about it. Like the Stafford Branch, it was based on a river: in this case the River Stour. There had been early works in the 1660s attempting to make the Stour navigable from the Severn to Stourbridge, but they soon fell into disuse and in the end it was the canal which provided the main navigable route down the Stour valley. However around 1840 a short length of the Stour was made navigable to allow boats from the canal to reach the various industrial premises on the river at Wilden – including an ironworks and a sawmill. Boats would leave the main canal by passing under the towpath bridge, then immediately drop down through a lock, enter the river at Pratts Wharf, bear right and continue downstream for about three quarters of a mile to Wilden.

It could be tricky to navigate especially when there was plenty of water coming down the river, but it lasted in use until around 1949. Today there’s rather less that’s accessible to explore than there is of the other two branches we’ve described, as there isn’t a footpath running along the river – but if you visit between late autumn and early spring when there’s less of it hidden by vegetation, you may well be able to make out the shape of the lock chamber from the Pratts Wharf towpath bridge.

So far we haven’t heard of any plans to restore it to navigation, nor can we immediately think of any reason to. But “never say never”…