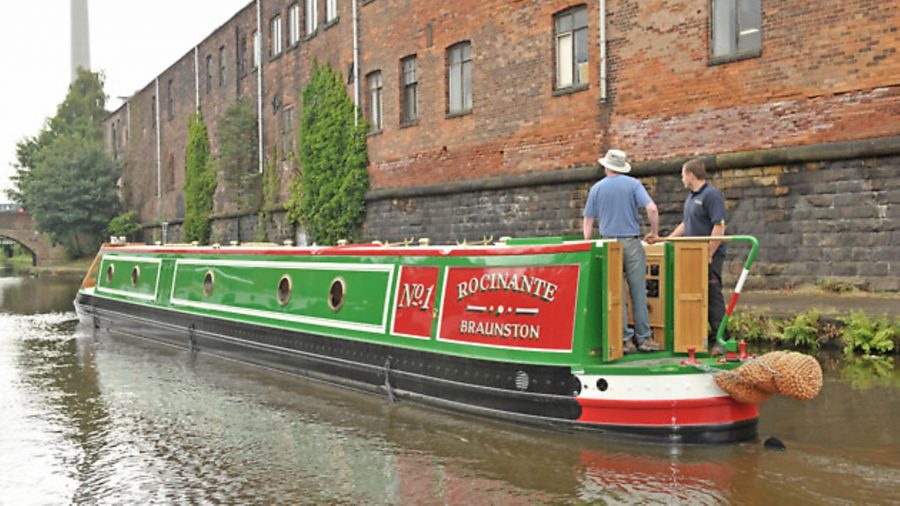 A new name in boat fitting was launched at the 2016 Crick Show, but in such a low key fashion, you might have missed it. That’s because Finesse Boats didn’t actually have a boat to show – their first one wasn’t finished.

The company has grown out of Tyler Wilson, one of the biggest and best known names in the steelwork side of boat building. Recently, the firm has been doing a small amount of fitting-out on a rather ad hoc basis, which has been brought together under the Finesse name, run by the next generation of the family. Louis Wilson is Jonathan’s son, while Ricky Lee is his son-in-law, and they’ve brought in expertise from Ken and Julia Warriner, who ran Fernwood for years before retiring.

Now the firm’s first boat, Rocinante, is finished and they’re off to a flying start. There’s absolutely no sense they’ve begun with something simple and straightforward – this is very much a bespoke boat and shows off the firm’s skills in design and manufacture.

As you might expect, this boat is built on a Tyler Wilson shell, and a fine one at that. The first thing you notice though is that it’s bright, very bright. The colour scheme – green with white coach lines and a white roof along with red panels at the stern – really stands out in a crowd. The painting, using a yacht paint, was done in Tyler Wilson’s huge and relatively new paint shed in Sheffield.

Take a closer look and there’s an enormous amount to enjoy about this boat. It is a sheerline Josher, so there’s a curvy bow and a lovely sweeping line along the side. The traditional look is emphasised by rivets. The gunwales are sharp rather than rolled and protrude slightly to make it look as though they’re made of wood in the traditional way, rather than metal.

There’s a similar story with the handrails, which protrude slightly to imply they’re wooden. There are recessed panels at the stern, carrying Andy Russell sign-writing. The traditional look is completed with brass portholes and mushroom vents. In short, this boat has fantastic lines.

It’s the sort of boat you could look at for hours and never get bored.

And there are hidden depths to this shell, literally. One of the main concerns for owner Andrew Ridley, at 6ft 5in, was headroom so Jonathan Wilson increased the height of the hull sides by around six inches. To make sure the boat looks right, these extra inches are below the water, meaning it’s deeper draughted than many modern boats.

On a practical level, there’s a gas locker in the nose, the well deck has a set of little doors in the forward bulkhead (giving access to the bow thruster tube) and the deck has lockers on both sides, which are useful for storage and somewhere to sit. The boat will have a cover over the cratch.

This is a 64ft boat, with a traditional stern and standard layout. The saloon is at the bow, followed by a Pullman dinette and a galley. A corridor on one side offers access to a sort of utility area and shower room. The cabin is towards the stern, with a modern engine room behind.

The fit-out uses a combination of oak tongue and groove below the gunwales, with painted panels on the cabin sides. These panels are made from ash, meaning the grain still shows through the paint to give a nice texture, and they’re framed with more oak. A nice detail is that some of the trim is walnut, so the boat has a pleasant variation in colour. The floor looks like oak, but is, in fact, hardwearing Karndean.

Attractive stable doors lead from the well deck into the saloon and you find yourself walking down some deliciously curvy steps into the boat. They’re like a statement of intent, showcasing the skills needed to fit-out a boat in a stylish way.

On one side there’s a corner cupboard, while on the other there’s a diesel-fired Lockgate Refleks stove. There’s no hearth of any sort, which produces a sleek look. Diesel stoves are much more controllable than solid fuel ones and don’t get as hot, so there aren’t the same stringent installation guidelines. Lockgate do recommend, though, that there’s a tray underneath in case of a fuel spill during maintenance.

The main piece of furniture is a large leather sofa, built in-house, with a magazine rack in each end. Boxes pull out from underneath to provide storage, a footstool or even as somewhere to perch.

At one side of the sofa, there’s a little flip up table on the hull side, for a drink or book. Opposite, there’s a TV unit with shelves, under the gunwale. The half-height bulkhead between the saloon and the dinette provides more shelves and cupboards.

It’s once you’re inside the boat that you notice the extra headroom. Andrew says even he has several inches to spare, so there’s no danger of banging his head or having to stoop. It feels even more spacious thanks to a Houdini hatch in the ceiling, which has little LED lights set into the surround. The portholes have chrome liners, giving a modern feel.

The Pullman dinette is raised and there’s a set of side doors with glazed inner doors to give a view. The plinth has linked drawers for storage, so the whole space can be used – pull one drawer out, and it brings out a second from behind. There’s also access to the space in the bench seats, through doors in the ends.

For increased comfort, the seats themselves have raked backrests, which can push back to the vertical to convert the dinette into a guest bed.

Made up of two L-shaped runs of units, the route through the boat switches from one side to the other. But the problem of two potentially dead corners is solved by having pull out units. There’s a lovely Belfast sink with side doors on one side, while a Hotpoint oven, a Hoover four-burner hob with stainless steel splashback, and an extractor fan above, sit on the other. The worktop is an attractive sparkly off-white quartz.

The bulkhead at the stern end of the galley has a pan rack, designed especially for the owner, and a couple of drawers above the worktop. These borrow space from the big cupboard behind, which is accessed from the corridor and has folding doors. The top half contains a freezer and the bottom has a washing machine, set right back in the space so Andrew can have a laundry basket conveniently positioned in front.

The corridor makes use of the space under the gunwales, with narrow cupboards all the way along, opened with push catches rather than handles.

The shower room is an off-corridor design, which seems less fashionable these days than a walk-through. The advantage is it’s still possible to walk through the boat even when someone else is using the room. This one is a very stylish space.

The walls are lined with laminate in a distressed slate contemporary looking finish and the basin is in a traditional washstand style unit, with drawers underneath. There are more hidden under gunwale cupboards for additional storage.

The loo is a Jabsco macerating unit, with the holding tank set across the boat at the stern. This means there’s a lot of pipework to investigate should anything ever become blocked. The shower is a good size rectangular unit, with a removable panel alongside to give access to the shower pump should it be needed.

One of Andrew’s requirements was a bed long enough for him, so it’s not surprising he’s gone for an in-line design. It extends to 5ft wide, thanks to a pull-out section. There are drawers underneath, again linked to more behind, to make use of all the available space. There’s a run of high-level cupboards and a sizeable wardrobe, offering hanging space and drawers.

On the side of the wardrobe, next to the steps leading up into the engine room, there’s a bookcase with a folding door, dividing the cabin from the engine room.

This is modern engine room, with the engine under the floor. but is the only part of the boat that feels a bit tight. Someone of Andrew’s heightin particular will have to be careful not to bang their head when getting out onto the back deck. There’s a range of cupboards, including ones for all the fuses and gauges, the inverter and calorifier, set vertically.

A nice feature is the small but deep stainless steel sink in the engine room. There’s a power point here too, so as Andrew single-hands most of the time, there’s the option of being able to have a small electric kettle to make some tea while waiting for a lock.

The boards over the engine are all removable to give access for servicing. For better access, the metal framework can be unbolted.

Rocinante is powered by a Beta 50 engine, which should be plenty of power for a boat of this size, even with the extra weight of steel. There’s also a Lewmar hydraulic bow thruster. It has a 24-volt electrical system and the six domestic batteries on board give a total of 330Ah at 24 volts. A 240-volt supply comes from a Victron 3kW inverter charger, and there’s a 3.5kW TravelPower, an engine-driven generator.

We’ve always liked how Tyler Wilson boats handle, and Rocinante is no exception, despsite being heavier and sitting deeping in the water. The long swims means turning is quick and precise.

The Lewmar bow thruster is effective – the advantage of a hydraulic one rather than electric is there’s no limit on the amount of time you can use it. If necessary, you can keep your finger on the button for minutes at a time, something not possible with an electric.

At the helm, the Morse control is comfortably to hand. The floor just inside the boat seems a couple of inches too low for the ideal steering position, but it should work well for Andrew.

This is a confident start for Finesse, as you might expect from a firm with a wealth of experience behind it. The quality shell almost goes without saying, but this is matched by the workmanship inside.

Such quality comes at a price, of course. Finesse say a 64ft boat starts at £150,000, but Rocinante has a host of extras, including the additions to the hull, the hydraulic bow thruster, TravelPower and bespoke sofa. We estimate the final price was around £170,000. That sounds like a lot, but it’s what you’d expect to pay for a boat of this quality and style in today’s market.

The launch of Finesse Boats may have been low key, but their first boat is anything but. Rocinante makes a loud statement – as well as some of the best hulls you can buy, the Tyler Wilson family can provide top quality fitting out too.