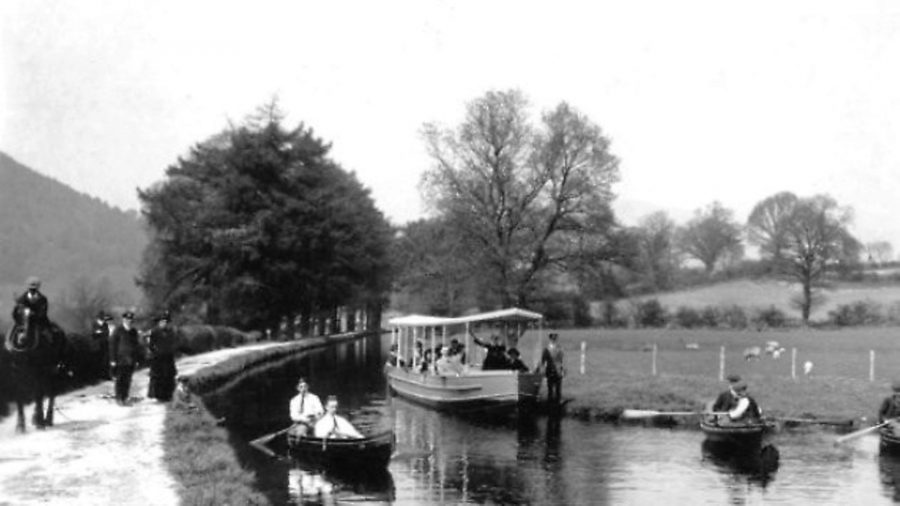 Today the only traffic to be seen on the majority of UK canals comes in the form of holidaymakers, but this has only been true for a little more than half a century. That does not mean people only discovered the delights of canal travel in the 20th Century, as that possibility was first considered right at the beginning of the Canal Age.

The promoters of the Trent & Mersey Canal produced a pamphlet as early as 1766 to describe the benefits a canal would bring.

It included this passage: “And if we add the amusements of a pleasure boat that may enable us to change the prospect, imagination can scarcely conceive the variety of such a landscape. Verdant lawns, waving fields of grain, pleasant groves, sequestered woods, regular canals to different towns, orchards whose trees are bending beneath their fruit, large towns and pleasant villages, will all together present to the eye a grateful intermixture of objects, and feast the fancy with ideas equal to the most romantic illusions.”

Although it was many years before anyone saw pleasure boats on the Trent & Mersey, passenger boats were soon at work on many of the other canals.

The first were introduced on the Bridgewater Canal in 1766. Sir George Head, who travelled in one of these boats in 1835, found the experience to be, at first, just as delightful as the pamphleteer had promised: “basking in the sunshine, and gliding through a continuous panorama of cows, cottages and green fields, the latter gaily sparkling in the season with buttercups and daisies”.

But things changed as they neared Manchester. “The water of the canal is as black as the Styx, and absolutely pestiferous, from the gas and refuse of the many factories with which it is impregnated.”

It is not perhaps too surprising that, in the early days, when canals were mostly used for commerce and served industries, passengers took the packet boats because they needed to make the journey rather than for pleasure.

There were, however, areas where the delights of the scenery proved more tempting than a background of mills and factories.

The Lancaster Canal gave access to Kendal and the Lake District and fast, narrow-hulled boats with comfortable accommodation proved popular. The Victorians developed a great passion for all things Highland, and Scottish and canal travel was given a boost when Queen Victoria took a trip on the Caledonian Canal in 1873 on the pleasure steamer Gondolier. The daily service on the canal soon became a favourite of tourists while the other Scottish canals helped make pleasure cruises a growing business.

Not everyone wanted simply to buy a ticket and join a crowd of strangers on an organised trip. There was a thriving trade in private boating in the late 19th century, especially on the Thames – a scene captured with great good humour in Jerome K. Jerome’s Three Men in a Boat, published in 1889.

But canal boating had not yet really become popular.

An 1885 magazine article about a trip down the Regent’s described the canal as London’s “unknown river”, though it did mention some leisure use. It read: “Small pleasure boats are allowed to ply on parts of the canal, and has given life to the scene. A large barge is anchored in front of a green field, and its owner informs us by a sign that he has ‘boats to let for school and picnic parties’.”

There were other canals where day boats were available for hire, but anyone looking for a longer trip had to make their own arrangements.

Two Girls on a Barge written by V. Cecil Coates – doing exactly what the name suggests – describes the adventures of two young women on a canal trip. They hired a working narrow boat, and had the hold partitioned to make cabins, which they hung with exotic curtains from Liberty’s.

Unlike modern holidaymakers, they did not work the boat themselves, but left that to ‘Mr and Mrs Bargee’. Their trip took them from London to explore the Grand Union, and they found the whole experience very exciting, particularly when they had to go through Blisworth tunnel.

They were not the only travellers by narrow boat. E. Temple Thurston travelled in the Flower of Gloster on a far more extensive trip, which he described in his book of 1911. Unlike the ladies, he took a keen interest in the life of the canal and the boat people.

It was George Westall who first popularised canal cruising, writing a guide to the rivers and canals of England and Wales in 1908. This encouraged the more adventurous to take their own boats on canal cruises.

When P. Boutheron described his canal holiday in 1915, he comes across rather like some modern travellers, more interested in recording how quickly he could shoot round the system than in pausing to enjoy the journey.

He typically records leaving Hockley Heath at 9am and covering 25 miles and passing 66 locks in the day. He and his friends travelled in a motor launch, but took a crew along to do the hard work.

Over the next few years, there was a slow increase in people making canal journeys, culminating in the most famous of them all – L.T.C. Rolt’s journey in Cressy, recounted in perhaps the most influential canal book ever written, Narrow Boat.

Travel was, of course, curtailed in the war years, and the aftermath saw a dramatic change in the whole canal world. Commercial traffic went into a rapid decline and several companies, including the famous Fellows, Morton & Clayton, withdrew altogether from commercial carrying. Others tried to find a new market by converting their narrow boats into hotel boats.

But the biggest change of all was the nationalisation of the British canals. This coincided with an increased interest in the whole idea of canals for leisure.

The man in charge of the Waterways section of British Transport was Sir Reginald Kerr, who realised the future of the canals was as likely to depend on leisure rather than commercial carrying.

More and more people were turning to canals. In 1950, just 1,500 licences had been issued for canal cruising, but that figure had reached 10,500 ten years later.

There were a growing number of companies offering boats for hire for week-long holidays. Initially, most of these were the cabin cruisers already familiar on rivers such as the Thames and on the Norfolk Broads.

The official Waterways Board decided it, too, would go into the hire business. In 1956, a small fleet of hire cruisers was based at Chester, later moving to a new base on the Middlewich Arm.

It was in one of these little vessels that my wife and I made our first tentative and rather nervous excursion on to the canals, beginning as so many others have done with a trip to Llangollen and back.

We rapidly discovered the disadvantage of small, light craft that skittered across the water in the lightest breeze and bounced alarmingly around locks.

Soon alternatives were available. Among the new hire fleets was Mid-England Narrow Boats, begun in the early 1960s, and it started building steel-hulled craft, based on traditional narrow boat design at its base in Market Harborough. It later changed its name to Anglo Welsh and it set a pattern for the hire boats that now dominate the scene.

The Waterways Board was responsible for another valuable help for the holiday trade – publishing a series of guides to individual canals, with linear maps that gave the impression that every canal ran in a dead straight line.

But they gave all the information you needed: distance scale alongside the map, bridges and locks etc clearly marked and a brief description of the route.

The guides may have been basic but, combined with hire boats that were perfectly suited to canal travel, the holiday makers now had everything they needed for a successful holiday – apart from any guarantee of what weather the British climate would provide.