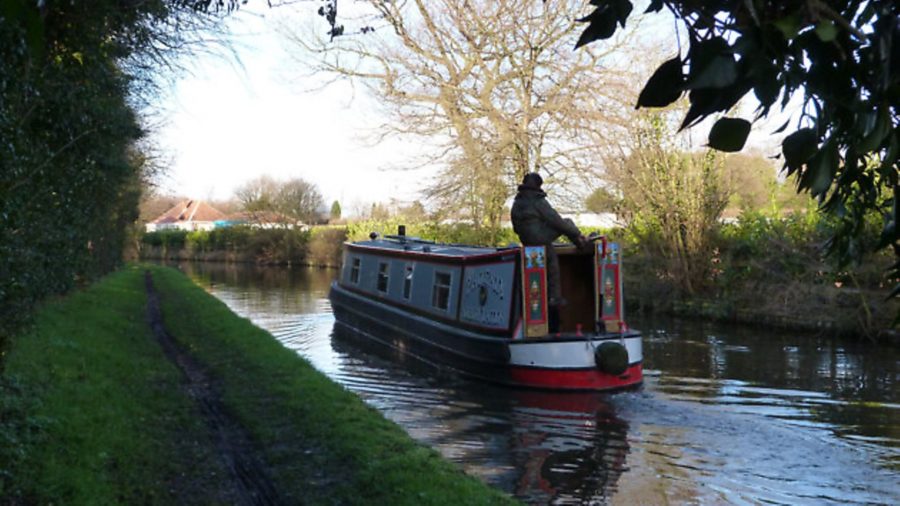 Are you put off boating by the cold weather? Don’t be – you can bag a bargain and have a special trip at a much quieter time. Rosie Ellis enjoys a winter’s tale

The nights are long, days grey and often sunless, rain carries tiny droplets of ice and the cold seems to creep into every gap and opening. The last thing many people are thinking of is hiring a canal boat for the week. And that is exactly the reason we thought it would be the perfect time.

Having taken a couple of week-long holidays with family in the height of summer, my partner Mo and I were keen to sample the life again. There are special deals to be had in winter if you’re happy to arrange something just a few days before the holiday.

An evening on the phone and we settled up with Norbury Wharf on the Shropshire Union to take Phoenix, a four-berth luxury narrowboat with a solid fuel stove, for a very reasonable discount. We packed for winter conditions – hot water bottles, fleece blankets and our thickest jackets, hats and socks – and food included plenty of cans of soup and supplies for hot drinks. Keen to use the fire, we also took a bag of coal, sticks and firelighters.

Approaching Norbury Junction and the wharf we were already being prepared for the week of calm ahead. A single-track country lane led us from the main road, punctuated by large, old red brick houses. When we arrived, boats lined against the side with their pretty painted doors open and the sound of idling engines.

There is no hurry on the canal during winter. That atmosphere surrounds you from the moment you arrive at the dock to collect your boat. Of course, I was eager to board, load our bags and set the kettle on the stove so our holiday could get underway, but it was obvious this is no place for rushing.

We bought a Canal Companion guide for the Four Counties Ring, full of essential information. Once loaded up and the car safely parked for the week, we were shown the ropes, literally, and asked if we’d like assistance to depart. Preferring to regain our skills on a straight, we opted for help out of the yard.

The first thing we regretted was not taking sunglasses. Chugging slowly out of the wharf and into the afternoon sunshine, we were blinded by its brilliant reflection on the still water. Within minutes we were on our own, Mo pulling the brim of his hat low over his eyes to gain some visibility.

We aimed to go just as far as the Hartley Arms at Wheaton Aston, enjoying the lock-free section to gaze at the views as they slid past and remind ourselves of the gentle touch required to keep the boat steadily pushing forward down the deeper middle part of the canal.

As the minutes passed, we could almost feel our heartbeats slowing to match the tranquillity of the world we now inhabited. Work and all our cares trickled away with the gurgling water. The short, cold immersion in Cowley Tunnel was like a gateway between our usual life and this week of carefree silence.

Under the trees of Chamberlain’s Covert, a bright blue kingfisher darted alongside us for a stretch, eyeing the water intently before dropping like a stone into the murky swell, appearing a second later with a fish trapped in his beak. His lingering on the branch, so close as to almost touch as we passed, felt like a thank you.

We moored up outside the Hartley Arms and set about lighting the fire. Phoenix has gas-fired central heating, which kept it comfortable, but we both knew such a luxury would soon mean the purchase of another gas bottle if we used it continuously. So once the fire was lit, off went the heating. The stove provided kept us toasty all night.

In keeping with our relaxed holiday attitude, we opted for dinner at the pub. When we arrived it was packed but the landlord made us a new table as if nothing was too much trouble.

The next day provided another relaxing and practically lock-free ride up the ‘pound’, taking a left at Autherley Junction, on through the narrows at Pendeford Rockin’ and ending up at Gailey Lock with its distinctive red brick roundhouse.

It felt as if the canals were our own. We only saw five other boats and one of those was the coal man doing his deliveries. Mo’s driving skills quickly returned and he was now the undisputed Captain of our vessel, deftly slipping under impossibly tight looking bridges and easily holding a straight line against the water’s flow. We marvelled at the expert brickwork arches as we slid through, noting the deep grooves on the rounded cast iron corner protectors, where the ropes of thousands of passing horse-drawn barges have worn their mark in history.

As a reminder of life continuing without us, the M6 runs for a short time adjacent to the canal, passing over just after Penkridge. When we first saw the motorway, the traffic was at a standstill. We laughed to ourselves that the boat was moving faster than them and wondered how many times we have been hurtling along that stretch of road, oblivious to the peaceful world just a field’s distance away.

The week continued in a similar fashion. Tixall Wide and the evocative Tixall Gatehouse and farm had us imagining days gone by, when estate owners were so wealthy and influential that canal builders were required to alter plans to ensure the view from Tixall Hall was not ‘ruined’. In 1771, Tixall Wide was designed to turn the canal into a lake and the beauty of this spot as you round the corner takes your breath away.

Re-built in 1555, and again in 1785, Tixall Hall itself is long gone although there doesn’t seem to be any well known reason for its demolition in 1927. The eye-catching gatehouse remains and, almost out of sight of the water, the coach houses, built in 1785 and transformed into homes in the 1970s.

By Tuesday, we had reached Haywood Junction and decided to turn around here and spend the morning exploring Great Haywood. Just across the little bridge from the canal is the Shugborough Hall and County Museum. The tearoom at Haywood lock serves hot meals at reasonable prices. After our mooch about the town, we returned to Tixall Wide for lunch and to enjoy the view for a second time. We continued to Acton Trussell to stop for the night outside The Moat House hotel.

We were initially disappointed to have to return the same way we’d come – instead of having time to go the whole way around the Four Counties Ring – but, in fact, the Captain has a 90° view when at the helm, forward and to the right and, therefore, the opposite view on the return.

We hop-scotched the places we’d already visited on foot to take in other places we’d passed by the first time round. We stopped at Penkridge again for the Wednesday market and loaded up with freshly made cakes and some steak and ale pies. I found some thick thermal socks and a pair of workman’s gloves with fleecy lining. In the cold temperatures, I had so far been living in the only thickest pair of socks I had. It was a delight to pull on a fresh new pair of equal cosiness.

Most of the ancient and picturesque towns are well worth the short walk from the canalside. Coven’s treat is Coven Farm, a beautiful timber-framed house with 1600 painted on the side of the old barn buildings. Brewood, with its signature red sandstone church and impressively tall spire, is packed full of lovely old, unusual properties, including Speedwell Castle – a Gothic fantasy built in the 1780s, apparently after a win on a horse with the same name. Every street is a photographer’s dream.

The bitterly cold air made it no surprise when a sprinkling of snow appeared on Friday morning. The canal’s romantic appeal increased in the frosty air, with smoke from the fires trailing lazily upwards, accentuated by the morning sun.

The attractive Stretton Aqueduct took us over the A5, ornate iron railings and round stone pillars presenting an incongruous sight surrounded now by agricultural land. Before long we were back at Cowley Tunnel, the approach looking quite Jurassic, covered with ferns, moss, trailing plants and one spiky bramble tentacle hanging at face height in the entrance as if waiting to strike.

TV reception anywhere on the canal is patchy, so we were denied most nights of our usual fare of reality TV or stand-up comedy. I sank into my magazines and books.

Even with our limited budget, we had enough for a few meals out and I was keen to find out the story behind The Boat Inn at Gnosall, mentioned in Stuart Fisher’s Canals of Britain as ‘the haunted Boat Inn which is located in former stables and has a curved wall’. On arrival there was none of the sinister vibe I hoped for, instead the atmosphere was warm and welcoming under a low, oak beamed ceiling, decorated with a most impressive collection of Toby Jugs.

Waking up on the last morning, the boats, trees and towpath had been painted with glittering crystals of ice. The ropes were almost too frozen to pull out the knots but worked free after a bit of vigorous persuasion. We were the only boat moving, as it had been for most of the week. With the rising sun on our backs we made the five miles back to Norbury as slowly as we could, breathing in the crisp air, soaking up the view, listening to the cracking ice, savouring every moment and knowing we would return.

Back home, the rooms of our house seem pointlessly large and chilly. I long for my miniature waterborne dwelling. I have no doubt it won’t be long before we again listen to our hearts and swap walls for a hull.

Me & My Boats: Fiona Sims