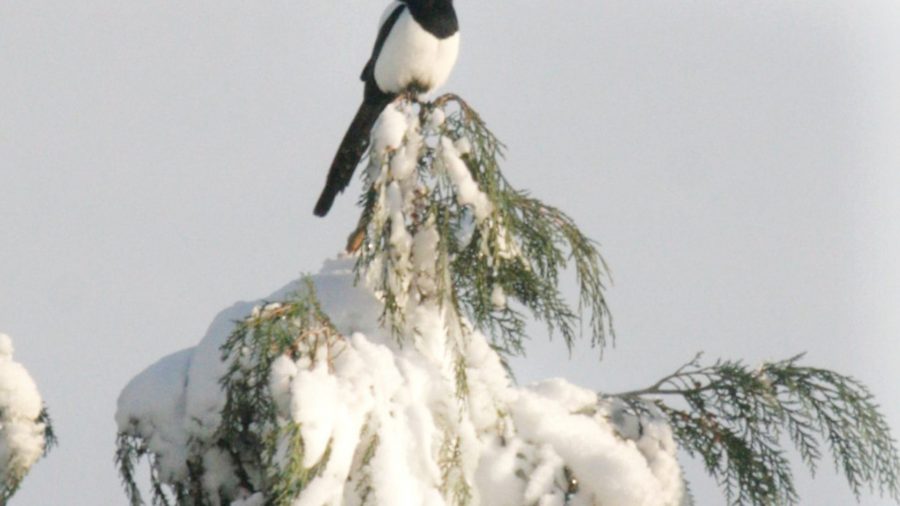 There’s no hiding away for the quirky magpies, who mate for life and are busy courting at this time of year, preparing to build their large, domed homes near the tops of tall trees. And if you can’t spot one, listen out for the unmistakable chatter

“In the bleak midwinter” there is still plenty to see along the banks of our waterways, particularly with few leaves to block the view, but in the water itself little moves. Most fish skulk near the bottom, often going without food for weeks on end, and smaller invertebrates become inactive. The water feels chilly, but it is usually warmer than the air; the problem is the limited daylight which results in water plants growing very slowly – most are lying dormant under the water – so the whole food chain is affected.

Along the towpath, the tall silhouettes of the umbellifers, such as hogweed and cow parsley, are especially beautiful on a frosty morning. When the leaves have died and the ripe fruits fallen, only the brown, brittle hollow stems remain, supporting the rays of the characteristic umbrella-shaped flower head. Down at ground level, the Common or Lawn Daisy can be found in flower even in January. This delightful little plant (“…the babies’ flower; Make a necklace gay with me” –Cicely Mary Barker), the Old English ‘day’s-eye’, was so-called because the whole flower head closes at night and opens again in the morning. The composite flower comprises white petal-like rays, often tipped with red, surrounding yellow disc florets. For generations, daisies have been plucked bald of their petals to predict the outcome of a love affair, and our ancestors used juice from the plant to treat fresh wounds. The rosette of leaves is acrid-tasting, so avoided by herbivores.

Winter afternoons are a great time to see our normally nocturnal hunters: the small mammals they prey upon are more likely to risk foraging in the relative warmth of the daylight hours than during freezing nights – and hungry predators have to follow suit. Hunting can be especially hard during periods of snow cover when voles and shrews stay underneath the insulating layer of snow. Mice will move around on top of the snow, but they spend an increased proportion of their time underground eating stored food. The normal camouflage of the hunters is of little use against a white background, and, although a fox can dig, it would stand no chance of catching a healthy bird.

The Magpie is one of our most distinctive birds with its bold ‘pied’ black and white plumage, long tail and arrogant stance. Like other corvids (the crow family), they are very intelligent birds – even able to recognise themselves in a mirror – and seem to feel no need to hide away. When close, you will see the black plumage take on a more colourful hue with a purplish-blue iridescent sheen to the wing feathers and a greenish gloss to the tail, which takes up half the length of these quite big birds. When landing, the tail is elevated and carefully carried clear of the ground.

These quirky territorial birds mate for life and are usually seen in pairs or larger family groups. A raucous chattering is very characteristic of social Magpies (‘Chatterpies’), but at this time of year the males are occasionally heard making a much softer sound as they court the females in large gatherings of birds. An older bird that has lost its mate will look for a new partner amongst yearlings, whilst young birds pair for the first time after 1 or 2 years. In courtship display, males rapidly raise and depress their head feathers, and uplift, open and close their tails like fans. Magpies prefer to build their large domed nests of twigs in a central fork near to the top of a large tree. You can see them clearly in the bare winter branches. Established pairs regularly return to old nests that are extended and refurbished with a lining of earth, fine roots and grass. Twigs are collected from January and it will take several weeks to construct a nest before egg-laying in the spring.