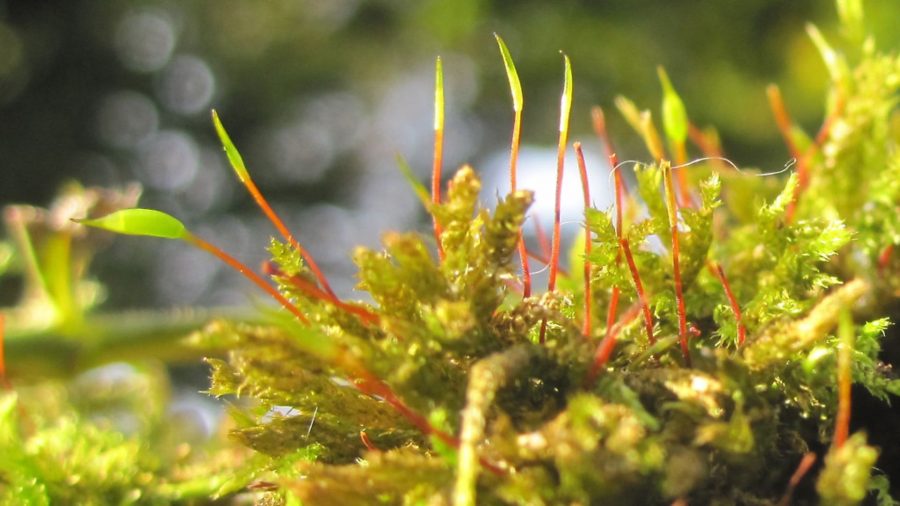 “The amphibians of the plant world”, mosses live on land but depend on water to reproduce. Commonly found in wooded areas, the edges of streams and my lawn, mosses can grow anywhere in cool, damp, cloudy conditions, which probably fairly accurately describes the British climate. There are over 600 species of moss in the UK varying from coarse tufts to compact green cushions – each made of many tiny moss plants packed together to hold onto water.

Mosses first appeared in the fossil record 320 million years ago and these primitive plants remain unable to grow very large. They are “non-vascular” plants, lacking the series of tubes present in more advanced flowering plants that are used for transporting water and nutrients around the organism. Modified stems form thread-like rhizoids that take the place of roots and anchor the plant to the hard substrate. Absorption of water and minerals occurs mainly through the simple leaves that cover thin wiry stems. Enough sunlight is needed for the leaves to photosynthesise: they are never parasitic, but often grow on trees as epiphytes, the moss being fairly specific about the tree it is associated with.

Mosses do not produce flowers or seeds, but spread by tiny, single-celled, spores formed in beak-like capsules born aloft on thin stalks. They also spread asexually: pieces of the moss body can break off, move by wind or water, and start a new plant if they settle in a suitable moist environment.

Many birds use moss to line their nests and pre-industrial societies also recognised the benefits of moss for bedding and insulation in mittens, boots (Otzi, the European Iceman, found mummified in a melting glacier, had moss-packed boots) and buildings. In World War 1 Sphagnum mosses were used as first aid dressings on soldiers’ wounds, being highly absorbent and having mild anti-bacterial properties. In rural Britain Fontinalis antipyretica was traditionally used to extinguish fires – it could be found in substantial quantities in slow-moving rivers and the moss retained large volumes of water which helped quench the flames.

You can also see a relatively primitive bird, with one of the longest fossil records of all birds (over 100 million years), on our waterways. Two species of this family of large, black, long-necked birds occur around the British Isles. Shags (slightly smaller and sporting a small crest in the breeding season) are commoner on the coast, but it is the Cormorant with its white cheeks and chin that has spread inland, especially during the winter months.

Cormorants are powerful swimmers both above and below water. Their legs are placed well back along the body and, unlike in most water birds, the hind toe is long, turned inwards and webbed to the inside front toe, giving them three webs instead of the usual two on each foot. Cormorants actively pursue fish beneath the water, grabbing them with their hooked beak. The birds usually return to the surface to swallow their prey. An elastic throat pouch and a specially hinged beak mean that, unlike Grey Herons, they can also cope with large flat fish.

Although totally dependent on diving in water to catch food, the Cormorants’ wing feathers are less water repellent than those of most other water birds. They have to seek an open, breezy place after each feeding session and literally hang their saturated wings out to dry. Looking like a cleric about to give an open-armed benediction in his long black cloak, ‘parson’ and ‘Mochrum elders’ are both archaic names for Cormorants. The posture can also have a sinister Gothic appearance, and Cormorants have an ancient status as creatures of ill omen.

A writer for 35 years, he fell in love with the waterways after living near the Canal du Midi.