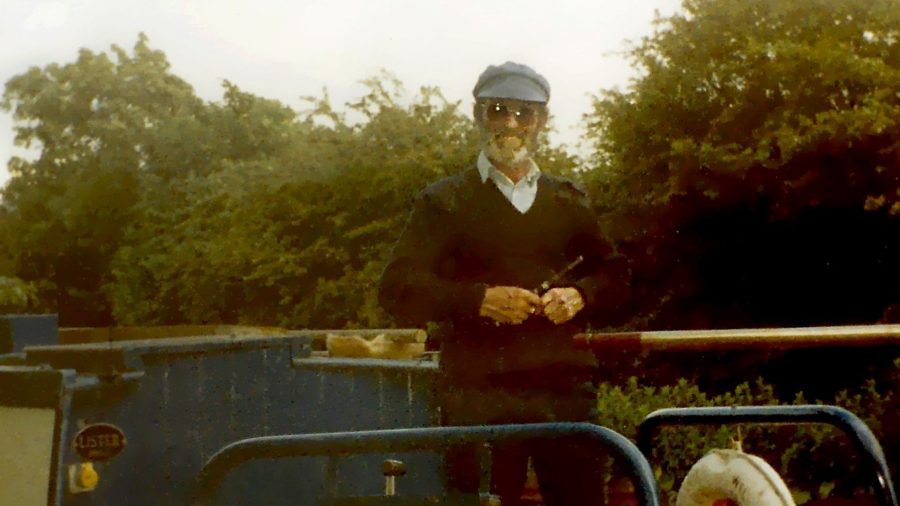 Tim Coghlan retells the fascinating life of Charlie Gamble, a former mercenary who enjoyed his final years on board his 45ft floating home…

In recent years I had rather lost touch with Charlie Gamble, our engineer from my early days at Braunston Marina. For many years after his retirement in 1995, he continued to join us for our annual Christmas parties – certainly well into his eighties. Then old age and infirmity overtook him, leaving him almost blind, and cared-for by his good daughter.

There was just the odd telephone call, always concluded by, ‘Tim, do you wanna hear a joke?  My answer was an unfailing no – his jokes were dreadful –  but I still had to listen.

Then I was recently contacted by that daughter to say that Charlie had died peacefully back in February aged 91. With lockdown restrictions now easing, she asked if she could complete the last of his unfulfilled requests – to have his ashes scattered on the waters of Braunston Marina. He had so enjoyed his happy days working with us all, and living on his narrowboat Wild Goose, with his feral cat Rambo – that merciless slayer of rats -–which had died some years before. Since then, Charlie had adopted a pair of feral cats, Daisy and Polly, which had both predeceased him, and he had saved their ashes to be scattered with him.

Charlie was a great character – a Cockney sparrow if ever there was one – small, wiry, and tough – plain-speaking with a rough South London accent that would have been at home in The Blind Beggar Inn, except he didn’t drink.  Born and educated in Tooting, Charlie was too young for World War One, but was called up for National Service shortly after it, joining the REME, where he found his métier in things mechanical. He was flown to Berlin to assist with the great Berlin Airlift of 1948, for which late in life he received a badge and certificate.

After he was demobbed, he met and married Kate, and they soon had four children, settling for a time in South London.

But Charlie’s taste for a roving life had already begun. He bought his own lorry and became a contractor in the building of the M1, which introduced him to the Midlands. He then moved his family to Rugby, where GEC had a major operation. Through that company, he saw the opportunity for a well-paid contract to work in Lagos, Nigeria, where he went for a total of three years on his own.

Somehow during that period Charlie became involved with mercenaries fighting in the Nigeria-Biafran Civil War (1967-70), where he was of some importance in running the Biafran motor pool. This kept him largely out of the front line of that conflict, but he told his family on his return that he had seen sights he never wanted to discuss.

The mercenaries called themselves the Wild Geese, after the name of the Irish mercenaries who had served in the French and other continental armies in former times. Years later, when Charlie moved to the canals, he renamed his narrowboat Wild Goose as a memento of his wild African days.

On his return, Charlie was able to buy a house in Rugby for cash, and to carry out renovations to it. But the call of Africa was now in his blood. He took a contract in Zambia, where his family joined him. Then they moved with him down to Durban in South Africa, before he became convinced that Ian Smith’s UDI-Rhodesia was the real land of opportunity. UDI, short for Unilateral Declaration of Independence was declared on November 11, 1965. Charlie and his family moved to the capital Salisbury, where he and a new business partner set up a company repairing washing machines and other domestic appliance in the make-do and mend economy of that country, increasingly under siege with sanctions.

Though aged over 40, and a new arrival, Charlie still had to join the Rhodesian Army Reserve, where he served a month a year on active service. With his knowledge of vehicles he was put on the convoys bringing up goods from the Limpopo River southern border with South Africa, which became increasingly dangerous work.

It all became too much for his wife. The marriage broke down and she went back to Rugby with their children. Charlie stayed on, but his business was not a success, and he went to work down a mine.
Just what happened next was not known to this family. But after Charlie had been with me for some time he opened up on something of what went on, because I’d known  Rhodesia well.

We had distant family connections, the first Premier being Sir Charles Coghlan (1923-27), whose descendants were still there. I stayed with them when I hitchhiked extensively in the county on my own aged 18 – between school and going up to London University.

That was around May, 1966 in the months that followed UDI, when the country was still quite safe. Indeed southern Africa generally was quite safe, and I also hitchhiked in all countries from and including Kenya southward. In the following year, 1967, I had worked during the long university vacation as a journalist on a South African weekly news magazine, ‘News Check’, based in Johannesburg, where I reported on the early stages of the worsening Rhodesia situation.

There were just two of us writing all the foreign news, myself and a Glaswegian journalist. I covered the whole of Africa, the Middle East and the Vietnam War – just like that -– and he did all the rest. We both relied on telexed news from Reuters and other agency news services, and never actually left our desks, but we had to write as if we had. In subsequent years I followed the tragic unfolding of events in Rhodesia with sad interest.

Charlie told me that once his family had left, and with the war escalating, he became very much involved with the conflict, which had also attracted former mates of his from the Biafran War. Charlie had served for a time in the Selous Scouts, the Rhodesian equivalent of the SAS, but whose methods of operating remain controversial, though it is often overlooked that it was a mixed-race unit of crack soldiers. With the Scouts, Charlie served in the front line, witnessing the full horror of that civil war. He would never talk to me in detail about it, other than to express his disgust at the ‘freedom fighter leaders’ – now running the country – who uncaringly sent their young men in waves to die, high on the drug dagga, and utterly untrained for combat.  Charlie was one of the first to see through the man, at first a hero,  who later became the merciless dictator President Robert Mugabe.

In 1980, that war ended with a peace deal brokered by Britain’s new Prime Minister, Margaret Thatcher. Aged about 50, Charlie now returned to the UK, and bought a house in Corby, Northamptonshire which he renovated. But he could not settle there. He was restless like Kipling’s veteran soldier, ‘Me that has been where I’ve been. Me that has seen what I’ve seen….’ and decided to move onto the canal at Foxton, to be near one of his daughters and her family. He sold his house and bought a 45ft narrowboat, which came with a steel hull and wooden top, and which he appropriately renamed Wild Goose.

He was soon well-employed in narrowboat engine maintenance for hire fleets and private boaters in the area, and enjoying the free and easy life of the canal liveaboards.  Then Charlie heard in 1989 that I was now looking for a new engineer. He came with excellent engineering experience, and loyally worked for me for the next half dozen years or so – living at the far end of the marina on his boat.

A traditional Sunday lunch was a treat of his at the Napton Bridge Inn along the canal, which was now well-run by a former Rhodesian farming family who had fled from Mugabe’s henchmen.

Charlie retired aged 66 in late 1995 to live again on his boat near Foxton.  Despite his years abroad, he had always paid his National Insurance stamp and was entitled to the full state pension, which, with his mercenary and other savings, gave him enough to live on, given the modest demands he made on life.
In 1995 we had Bracken, the excellent Cruising Restaurant, still operating in the marina. It was fitted out and run by George and Sally Pearson, with the boat steered by the legendary former working boatman Ernie Kendall, who lived outside the marina entrance on his narrowboat Poacher.

The well fitted-out dining area could seat 12, and Charlie hired it for a late summer evening’s cruise to which all the marina staff were invited as his guests – except I insisted on buying and bringing a couple of bottles of champagne to toast his future.

In reply, Charlie made a gracious speech, the sort that makes employing people so worthwhile.
In it he concluded that he had had an adventurous life, and was now looking forward to taking things very much easier – as a Lollipop Man on the M1 motorway at Watford Gap.