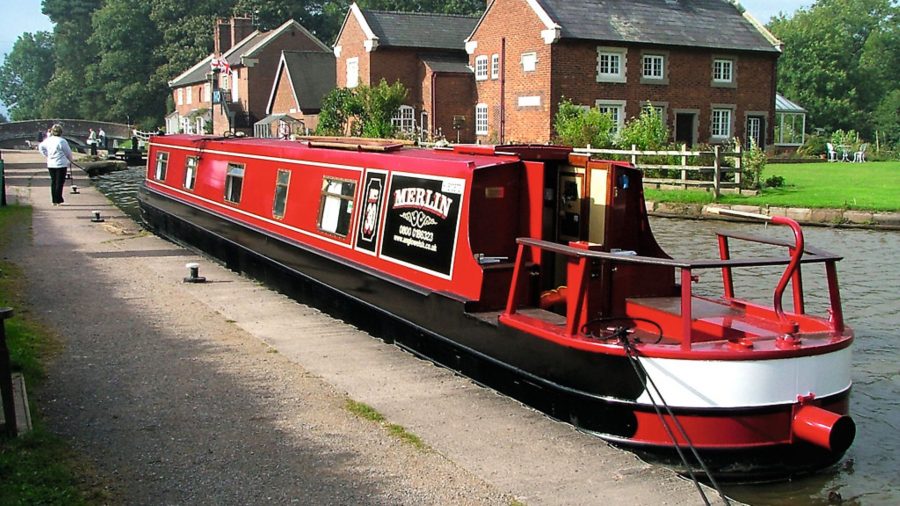 The latest boat test narrowboat, Honeysuckle, is a sponsored hire boat – a boat which is hired out by a firm, but isn’t owned by them; instead, it’s owned by an individual. But how do sponsorship schemes work, and what are the advantages and disadvantages?

Sponsored hire boats are much more common than you might think – partly because there’s really no way of telling whether any given hire boat is owned by the company renting it out or by someone else. Even firms which no longer offer new sponsored boat have legacy vessels still operating in their fleets.

All the schemes work in the same basic way: an individual buys the boat, and the hire company does all the management of the hire bookings, the turnarounds, and the maintenance.

The owner gets a proportion of the hire income, and usually a few weeks on board free of charge. However, the details of each scheme may be different, and if you’re thinking of joining one it’s important to read the small print.

Also, hire companies are not financial advisers (and nor is Canal Boat!), so if you’re planning to put a significant amount of money into a boat, be careful. Check out the scheme, know where you stand, and take advice if necessary.

The benefits of sponsored hire boats

One highly successful hire fleet is the one run by the boat builders, Aqua Narrowboats. Their hire fleet, based at Barton Turns Marina on the Trent and Mersey, consists of six boats — all of which are sponsored. In fact, the firm hasn’t actually owned a hire boat for the past five years or so.

Justin Hudson-Oldroyd, who owns Aqua Narrowboats with his wife, Jane, says it’s much better for the business not to have money tied up in boats. Instead, the firm was able to fund a purpose-built factory a few years ago. Aqua is unusual in that all the details of the scheme are on their website.

There are two designs of boat to choose from, both 58ft reverse layout semi-cruisers, with two cabins. One has the galley at the stern, while the other has a mid-galley. Both cost a touch under £140,000, which is described as costs price; it’s certainly less than you’d pay for a bespoke Aqua boat (but of course it’s not bespoke). Justin points out that they are top quality boats, with the best kit on board.

There’s a Beta engine, and Victron electrics — so no corners are cut just because it’s going to be a hire boat. The boat goes into the hire fleet for four years. The owners get 38 per cent of the rental income for the first two years, and 32 per cent for the following two years. There are some annual costs to pay, as Aqua asks for a 20 per cent contribution to the mooring fees and the licence. The firm says that, based on 2018 occupancy levels, owners can expect income after costs of around £9,600. In addition, they can book two weeks on board in the main season, and a further four weeks in the winter; that’s worth more than £6,000.

At the end of the four-year term, the owners take back the boat, and can either keep it and use it, or can sell it. It’s worth remembering, though, thata boat is a depreciating asset. Income depends on how much the boat is booked, and this is another area where Aqua does well. The firm has built up a very good reputation for high quality boats and good customer service, so there’s a high occupancy rate and a lot of repeat booking.

Will having a sponsored hire boat make me money?

The boats are already 60-70 per cent booked for 2021. Justin Hudson-Oldroyd says the scheme works particularly well for people who want regular boating holidays and plan to retire in a few years’ time. “The scheme means that they get free holidays for four years, some return on their money, and they won’t have to wait for a boat to be built when they stop work,” he says. Aqua builds only one new sponsored boat each year, and the next available slot is in the winter of 2023/24.

One couple who’ve had a sponsored boat for many years is Irene and Ian Jameison. They bought Merlin, a boat in the Anglo Welsh fleet in 2004, and it’s been hired out ever since. Anglo Welsh no longer offer new sponsorships, but they still have sponsored boats working for them; at the time, the firm was coming out of the ownership of a much bigger and diverse company, and needed to expand its fleet in the most cost effective way possible. Ian said it’s been a good investment, partly because the boat has been in the scheme for such a long time. “We paid £67,000 for it back in 2004”, he says, “and since then it has paid for itself and more. We’ve had better returns than we could have got elsewhere”.

Part of the reason for the success is that Merlin is a very popular boat. “We had quite a lot of say in the building of the boat” says Irene. “It’s a 62ft boat with a bigger galley than usual, and a vanity unit and a four poster bed in the cabin. It works really well as a spacious two-berth boat and people really like booking it” she said. The Jameisons now live on board another boat, so don’t really use the fortnight’s holiday they’re allowed in the ‘shoulder’ season – spring and autumn. But they have had many holidays on board, helping out the hire firm by moving their boat from one hire base to another, or taking it for winter maintenance and repainting.

The idea for our boat test boat, Honeysuckle, to be a sponsored hire boat came from the owner. He approached Sylvia Greenwood, who owns a small hire fleet known as Daisy Boats on the Lancaster Canal, to see if she’d be interested. As it happpens, she was. “I’m gradually retiring and handing over the business to my daughter”, she says, “so we wanted to increase the number of boats. Until now, I’ve bought each boat outright and the company has never had any debt, but this seemed like a good way of going forward”.As there’s no fixed way of running a sponsorship scheme, the financials with this boat are rather different. Sylvia worked out how much she needed to make each year to make it worthwhile, and the company will get all the hire income up to that point; everything in excess goes to the owner.

“The important thing,” said Sylvia, “is that all the agreed terms are in a legal contract, so everyone knows where they stand.” The owner will also get several weeks on board – but only if he remembers to book; he’s not allowed to make a last-minute decision and usurp hirers. A new hire fleet being started by the relatively new boat building company Trinity Boats at Dunhampstead in Worcestershire, is also looking to expand through sponsorship. Dave Howdle, one of the people behind the firm, says it allows them to grow without too much outlay. The firm has build and funded their first hire boat themselves, but future boats, which will be very similar, will be sponsored. “We’ll build the boats at pretty much cost price” said Dave, “and we’re looking at four or five year terms, with the owners getting a proportion of the income and some free weeks on board. It’ll be a new venture for us, but it’s well worth us trying it out.”

Is sponsored hire boating for me?

It’s clear that boat sponsorship can benefit both hire firms and boat owners. But it’s not for everyone, and anyone considering jumping in needs to think carefully first. The important thing is to find a scheme which works for you, and which is provided by a hire firm you trust – both to build your boat in the first place and to look after and manage it properly. When it works, as it clearly does for a lot of people, it can be a win-win.