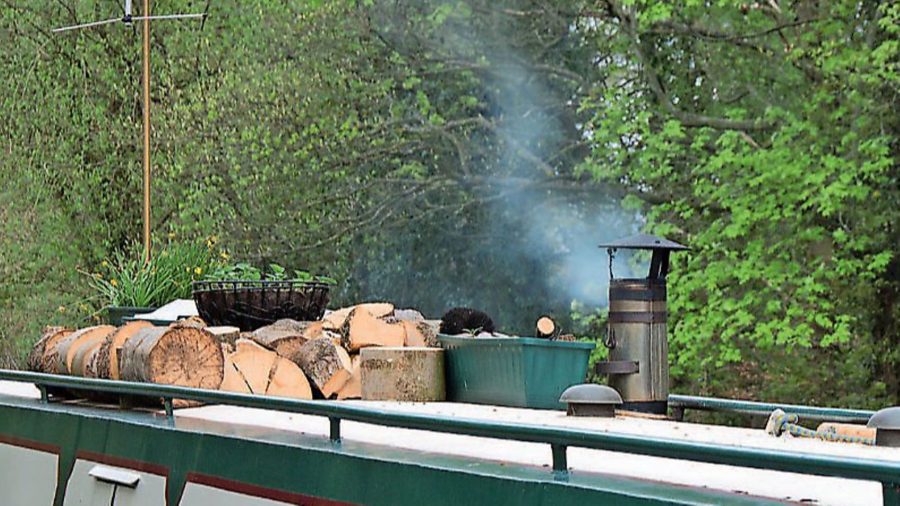 The ‘they’ in this case is DEFRA, the government’s Department of the Environment, Fisheries and Rural Affairs who released their Clean Air Strategy recently. It makes painful reading for anyone with a canal boat. In a pincer movement of proposed regulation we get hit on the one hand because of the emissions from our stoves and on the other for the discharge from our engines.

Though overwhelmingly more pollution comes from the 38.4 million vehicles on Britain’s roads, DEFRA have now turned on the 35,000 of us on canal boats on the inland waterways. Or rather they haven’t so much turned on us, as swept us up, unthinkingly, into proposed legislation which could destroy not just the tradition of the waterways but which threatens to make boating in its current form unfeasible.

For though our boats are precious to us – a home, a place for relaxation and a respite from the world – to them we are just NRMMs, or Non Road Mobile Machinery, classed in the same category as bulldozers, cranes and forklifts. DEFRA is considering regulating all of these, boats included, by ‘environmental permits’ which will have their greatest effect in urban areas. Some of these areas, like London, are overpopulated with young people who have made the canals their home; others are underused and neglected despite decades of effort by waterways organisations to attract boats and revitalize them.

I despair. What CAN they be thinking about – except you know instinctively that they’re not thinking at all. It wouldn’t be so bad if DEFRA was a completely different department of government, so caught up in weighty matters of state that it wasn’t even aware of us happy few pottering up the Shroppie or wherever. But DEFRA is the funding agency for the Canal and River Trust. It has ultimate responsibility for the waterways.

It’s the same with proposals in the Clean Air Strategy for legislation about our stoves, which Mayor Sadiq Kahn has already announced he wants to ban in London because of the dangers of the microscopic ‘particulates’ in smoke, which can be toxic. To counteract this DEFRA are proposing phasing out high particulate fuels like wood, and traditional house coal. It’s proposing to give local authorities more powers over smoke control areas as well so the Sadiq Kahns of other cities can come down hard on boats in the process of enforcing regulation on houses.

Even if every boat on the waterways had a solid fuel stove – and many don’t, of course – it’s a pathetically small number compared to the 1.5 million households in the country who are estimated to use stoves or fires. And most of these aren’t providing essential heat as ours are, but are sitting in the corner like a piece of art just to look at, a background to central heating. They are fashion accessories.

Of course no-one should ignore the problem of air quality in cities. In February 2013 nine-year-old Ella Kissi-Debrah died after a long history of asthma attacks. Earlier this year her family was given permission by the Attorney General to apply for a fresh inquest after lawyers successfully argued that the original inquest into her death did not address any potential impact of air pollution on her health.

Ella lived just a couple of miles away from where I’m currently writing, in Lewisham in south east London. The nearest canal to her, the Grand Union, is miles away, so boats moored there are unlikely to have had any impact on her death. However Ella’s home was 25 metres from the South Circular Road – one of the capital’s busiest thoroughfares. Over the other side of the borough is a massive plant producing electrical power by burning domestic rubbish. It’s one of more than 20 similar units in Britain and has been controversial since its opening, with Friends of the Earth occupying it some years back, claiming they had evidence of higher levels of particulates in its shadow.

I can’t help asking myself where DEFRA should be concentrating its search to control pollutants: cars or boats, the canals or industrial incinerators?

Award-winning current affairs TV producer, journalist and author Steve Haywood who has been a boat owner for more than 40 years