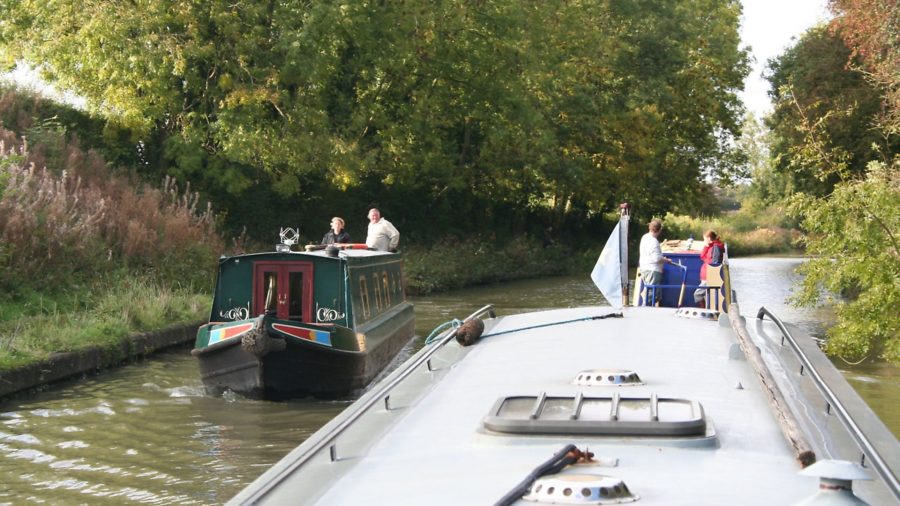 This crew has proved it doesn’t matter whether you’re teenagers, a family or boating later in life, canals have something for all ages. Liz Turner reminisces fondly about 35 years of happy hiring.

Elvis had left the planet and, a voice on the boat’s crackly radio said, Marc Bolan had joined him. From the tiny bathroom came a plaintive wail “Ergh, this loo roll’s wet!”

It was 1977, and we were on the first of many ‘barge holidays’. Apologies for the b-word, but it’s become a tradition – one of many. Looking back, too, it was a pretty awful bucket of a boat: plastic and primitive – certainly not a ‘proper’ narrowboat.

The crew consisted of five 19-year-old lads enjoying the long summer break from university, plus me and a friend Carole, both 17 and still at school. We’d all been mates for a couple of years, little did we know that the joys of a fortnight’s holiday on the waterways back then would cement a friendship that’s still going strong.

Arriving at Aynho on the Oxford Canal we bounded on board like Labrador puppies, overjoyed with the freedom and fun we were sure a fortnight’s boating would hold. The racket never stopped: banter, insults, occasional renditions of The Telephone Man and compilation tapes including Dr Feelgood and Ram Jam. (Punk was definitely happening somewhere else). Everyone had a nautical nickname from Captain Buttock (a nod to Radio Four’s I’m Sorry, I’ll Read That Again) to Ship’s Biscuit, and Biscuit’s weevil. We even had a toy parrot called Giuseppe, who later gained a lady friend (Verdi, of course).

We performed synchronised ballet poses, hanging off the side of the boat (not to be recommended in terms of safety, but we were young and holidays were about having fun) and enjoyed epic battles with pump-action water pistols. Each day was planned around the next pub stop for food, pints and use of toilets (we were broke and refused to pay for a pump-out).

The reason for Carole’s howl of anguish was that the primitive shower of those days sprayed the entire bathroom, and someone had forgotten to remove that vital item first.

Before arriving, she and I had opted for twin berths at the front, without realising our legs would be stowed beneath the deck. We couldn’t turn over, so we abandoned the ‘oubliettes’ and took over the double bed that the dinette turned into. During the reorganisation, Malcolm, the tallest member, ended up on the floor – another tradition.

There was never a question that the girls wouldn’t drive – even though neither of us had a licence for the road. We proved decent pilots by the end of the holiday but, at the beginning, we were all rubbish.

Each virgin steersman would start with the ‘avoiding submarines’ technique. That is, when spotting a bridge, a curve in the canal or another boat, shift the tiller a little. When nothing happens, give the tiller ‘full lock’. As the boat suddenly veers towards the bank, an angler, or the other side of the bridge -panic. Swing of the tiller hard in the opposite direction until veering back towards the original obstacle, which is now closer. Panic. Swing the tiller in the opposite direction… and so on.

We didn’t realise then that if a boat bumped the side it would bounce off with no real harm done, and find its way. So for every bridge and lock, we would have a team brandishing poles and mops pointlessly ‘fending off’ – you can’t ‘fend off’ the inertia of a 15-ton narrowboat. It didn’t take long for us to learn that.

Some lessons were learned quickly, such as: don’t cook while you drive. (I remember fried eggs flying up and around my head like a halo as the boat met a T-junction head-on). Don’t put the kettle on and expect a cup of tea in five minutes, and don’t go off for a walk all day and necessarily expect hot water and power when you get back if you haven’t prepared for it.

By the end of the first holiday, we’d developed from utter novices to become a pretty tight crew. We’d leap off in pairs and run ahead to set the locks, hold ropes and help out wives winding and heaving while their husbands watched, tiller in hand, captain’s hat on head.

Over the past 35 years, our crew has added regulars and one-off visitors. Spouses who didn’t like boating simply get left behind. Original ‘bargers’ Carole and Ray, who moved to Seattle and New York respectively, have both returned for weekends with new family members.

You might think it could be a problem, having so many adults in such a small space with limited bathroom arrangements, but it worked and there was always the option of a brisk walk along the towpath to escape.

We still all take turns to steer, hold ropes and work locks, but we’ve been hiring for so long now that we’ve fallen into roles to some extent. Brian – the Cap’un – quickly became a real enthusiast, learned all the proper knots, bought the books and maps and chose suitably picturesque routes for our holidays.

Martin enjoys steering, although he never learned to drive. His first instructor pleaded with him not to, observing that he lacked the minimum two-minute attention span required.

I love the locks, hearing the clank of metal as the paddles wind up, and feeling those huge gates become weightless as the water levels match.

In the early years, we approached flights of locks like a favourite sport. Once, as the sun headed for the horizon, the 13-lock Farmers Bridge flight on the Birmingham & Fazeley stood between us and a mooring recommended by a local boater. He reckoned a good crew could do it in an hour and a quarter. We did it in 58 minutes. On another occasion, we think on the Grand Union at Stockton, we met two women in despair because they’d declared they would do a lock flight alone while their hubbies went to the pub – just to prove they could. But someone further up had left the paddles open, so the lowest lock was almost empty.

There were no other boats around, so we worked in teams to move the water down and fill all the locks. And we got the ladies to the top long before their men reappeared.

Nobody’s perfect, though, and we’ve had our little problems. We once sheared the prop. Then there was the time I kept too far back in the lock at Kinver (on the Kennet & Avon) because the water was gushing in so fiercely at the front. I realised the front of the boat was going down while the back was lodged on a large step. The rudder bent, we slid off and my end landed with a huge splash. We called the boatyard and an engineer arrived swiftly to sort us out.

In 1990, a few of us tried boating in France. We didn’t get as far as we had planned because every lock-keeper sold excellent wine and, well, we were on holiday after all. The entire roof of the cruiser slid back, so we could bask in the sunshine while enjoying said wine with fresh baguettes and cheese.

It was glorious, but we missed the ease of boating in England; mooring up right by a nice pub for a leisurely summer’s evening dinner, and the shopping is simpler, too.

For the girls’ 40th birthday trip on the North Oxford in 2000, we had to have two boats, because we now had three children on board. One of the great things about boating is that the whole family can go on holiday together and we were not about to leave any friends behind. This meant we had to be responsible, to be aware of where they were all the time and to make sure we didn’t do anything we didn’t want them to copy – such as walking down the side of the boat.

On the other hand, it was an excuse for us to be kids again; we had the best water battles, and the kids loved every minute of it. One spotted a sign showing a fish with a stroke through it and announced it meant ‘No fish allowed’. He then spent several happy hours warning other boaters about the sharks.

Our most recent trip was a long weekend last year on the Kennet & Avon. Now in our 50s, where once in our teenage years we had jumped off, we now moved from boat to bank with more caution. We relaxed, enjoyed the scenery and watched indulgently as the novices, like us all those years ago, zig-zagged their way along the canal as they learned the touch of the tiller. I’ll admit to feeling positively smug as we headed for Bradford on Avon and I steered through the three right-hand bends to go over the beautiful John Rennie aqueduct without touching the sides.

After 35 years the boats have changed almost as much as we have. These days, you can hire boats with all the mod cons: TVs, plugs, hairdriers – and showers that no longer soak the loo roll.

Some even have Wi-Fi, and of course we all have mobile phones. So there’s no more desperate searching for a working payphone. Never again will we have to construct an aerial from the anchor and a wire coat hanger to watch the World Cup on a cheap portable TV.

We’ve also proved you can enjoy boating whatever your age, from children, to exuberant teenagers and relaxed mid-lifers. And we’ve met plenty of people older than us on the waterways. I’m sure we’ll keep boating – as long as our knees bear up.