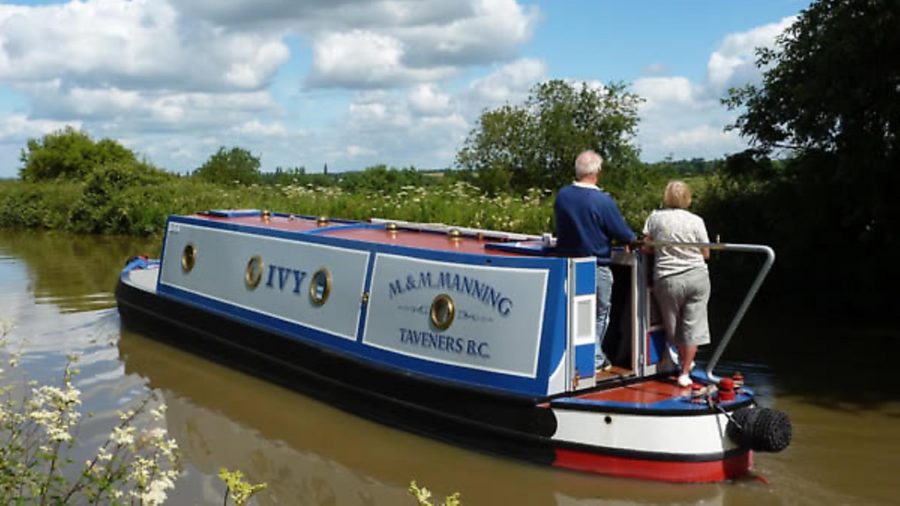 When someone tells you that they built their boat themselves, they usually mean that they bought a shell and fitted it out. But not Mike Manning. When he says he built his own boat, he means it. He started with a pile of steel, way back in 1997, and this year launched Ivy, a neat 38-footer on which he’s done virtually everything from laying the baseplate to painting the roof.

And he has form, too, because this isn’t the first time he’s built a boat. Mike and his wife, Maggie, have been boating since the late seventies, when they bought a 20ft fibreglass Buckingham cruiser. Then they bought a 30ft shell from Springer, which Mike fitted out himself. That was followed by two boats from Hancock and Lane, which again Mike fitted out. His next project was a 50ft shell from GT Narrowboats, paid for from the couple’s tax-free savings and hence named Tessa. Then Mike decided to have a go at building a boat from the baseplate up, and produced a 35ft tug called James. The boat can still be seen on the water, as it’s currently a Saisons hire boat, slightly lengthened and renamed Merlot. Ivy was begun almost as soon as James was launched.

What makes the story quite remarkable is that Mike had very little experience of working with steel. He was a car mechanic. “In my work I did a bit of welding on cars,” he says, “so I picked up the welding needed for the boat quite easily”. He did lots of research on the shape of hulls, to make sure he got it right. “If I saw a boat I liked, I’d take a photo or measure it,” he says. If a boat was out of the water at the time, even better: he could make detailed notes. Once he’d worked out the shapes he wanted, Mike made hardboard templates to make sure everything would fit together. “The most important thing from my point of view was to work to the centre line,” he says, “and make sure that both sides were identical. That way I could be sure that the boat would handle properly”.

Circumstances meant that Ivy’s build happened in a rather unorthodox way, and took a very long time. Mike started by fabricating the rear two-thirds of the hull – that was as much as he could fit in his shed. Once that was complete, he used scaffolding poles to role it outside, so that he could get on with making the cabin. Putting the two together was a challenge. “My two sons helped me with this bit,” Mike remembers. “We used a block and tackle and an engine winch to lift up the cabin. The old wooden shed was creaking like anything, because the steelwork was hanging from the rafters. Then we rolled the hull underneath, and lowered the cabin on top”.

Even though the shell was far from complete, Mike then started the fitout. The engine went in, he lined the shell, and put in bulkheads. And then things came to a halt. “We had grandchildren, we bought a caravan, and we got a virtually derelict chalet on the Norfolk coast, which Mike renovated,” says Maggie.” The unfinished boat sat in the shed for years, until a couple of years ago. “We were ready to return to the waterways,” says Mike, “so I thought I’d better get on and finish the boat”.

The main part still missing was a well deck and bow. Mike is a fan of tugs, so the boat was always going to have a long foredeck. He mocked up the front of the boat in hardboard in the shed, to make sure it looked right and would fit together. “I came up with the shape by eye,” he says, “and then shaped the steel myself. It’s the sort of thing that you get better at with practice, so I reckon I could do a lot better if I had another go now!” As far as the steelwork is concerned, there’s very little Mike hasn’t done himself – just the swan neck and rudder post. The 1.5 inch steel rod was too much to bend into shape, so he bought one from ColeCraft. The fit out also needed to be completed with a tiny galley at the front of the cabin, and the boat needed to be blacked and painted.

The boat finally went into the water in May this year, a mere fifteen years since it was started. And it’s a very neat little boat, which incorporates some good ideas – essential if you’re to fit everything you need into just 38 feet.

At the nose is a gas locker, deep enough to take full size gas bottles. Further back there’s a water tank under the large well deck, plus a huge hold for storage. The deck itself offers plenty of space for sitting out in the sun relaxing. The deck is quite high, so the forward doors have a sliding hatch above to make access easier.

Inside, the galley is at the front, a position which Maggie prefers to a mid-galley. It’s a tiny space, but has all the essentials including a Nelson stove (bought second hand but unused off the internet for a knock-down price). The portholes have shutters rather than curtains.

The saloon has a built in sofa which pulls out to make a guest bed. There’s a small flat screen tv under the gunwale, the only piece of equipment on board which needs 240 volts – so there’s a Maplins 300 watt inverter fitted to power it.

The shower room is an off-corridor design, with split doors so they don’t take up much room. There’s a basin, a shower, and a porta potti loo, all fitted neatly into a tiny space. The walls are lined with vinyl – a neat solution as there are no joins except in the corners.

The cabin, at the stern, has an in-line bed and, in truth, not much else. There’s not a great deal of storage space, just a couple of drawers under the head of the bed, and some shelves towards the stern. That’s because the bed doubles as an engine room. Hidden in the base is a Yanmar Shire 30hp engine. Access is surprisingly easy: lift the mattress and the boards come off; for larger-scale maintenance, take the mattress away altogether and virtually the whole bed base can be dis-assembled. Also under here are the boat’s two deep cycle leisure batteries, and the colorifier. Mike says he was concerned that the engine might get a bit hot being enclosed under the bed, but so far there have been no problems.

There’s a clever idea at the stern, where there are ladder-style steps up to the counter. A flap folds down to give the helmsman something to stand on inside the hatch.

As a self builder, Mike hasn’t complied with the Recreational Craft Directive. It means he can’t sell the boat for five years (although he wasn’t planning to!). But it has been surveyed, and has a Boat Safety Certificate.

One big advantage of doing everything yourself is that you get a boat at a fraction of the cost. Mike says it’s difficult to work out precisely how much Ivy has cost, partly because the built has been spread out over such a long time. “My best estimate is £15,000” he says. “And that includes all of the crane work and transport to get it into the canal”. By any measure, that’s a miniscule amount of money for a narrowboat (even a small one). But of course Mike has put a lot more into the boat in terms of time and skill; and to complete a project like this you need plenty of both. And if you were to build a similar boat today, you’d have to spend more: the price of steel and other materials have gone up considerably in the past fifteen years.

It’s an immensely appealing little boat. It looks good on the water (enhanced by the sign writing, done by a friend, John Poole), it handles well, and can turn almost anywhere. Inside, it packs a lot into a tiny space.

Now that Ivy is finally finished, Mike and Maggie are planning to spend a lot of time on board. They’ve done a lot of boating in the past thirty-five years, having covered most of the midland and southern waters, including the tidal Thames. But this will be different. “We’re both retired now”, says Maggie, “so we’ve got more time. We haven’t got to worry about work or making sure the children are back for school, so we’re planning to head for the places we’ve never been to before, like the routes across the Pennines, and up as far as York”.

There’s just one thing which might get in the way: the concept of the boat being finished isn’t really one which Mike accepts. “I’ve got ideas,” he says. “I’d quite like to stretch the boat, adding maybe another ten feet or so. I’d probably put in a section between the cabin and the front deck that looks like a clothed hold with a broad top plank.”

And when a man with a track record like Mike says he has ideas, you suspect that it’s only a matter of time before he puts them into practice.