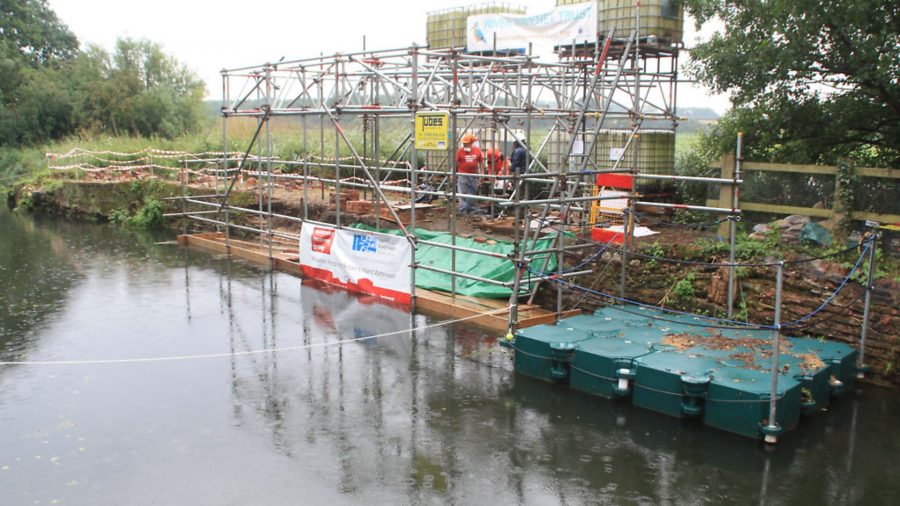 A group based in East Anglia faced a race against time to save a historic lock from collapsing – and this summer, volunteers working there found themselves struggling against the tide too…

Time and tide wait for no man. Well, if we can live with that kind of gender-specific language on a Waterway Recovery Group volunteer Canal Camp which happens to consist of about a two-to-one ratio of female to male volunteers, it would appear to be very true at Geldeston Lock on the River Waveney.

Looking down between the planks of the scaffolding that we’re standing on, cantilevered out over one wall of the dilapidated remains of the lock chamber on the Norfolk-Suffolk border, we can see the water level gradually inching its way up towards us. But there’s no need to worry, leaders Paul and Emma assure us: yesterday the tide turned before it got high enough to cause any problems for the volunteers. Somewhat reassured, we carry on working on rebuilding a section of the south wall of the lock chamber.

But before we go into details of what’s happening, let’s explain why exactly we’re in the bottom of a lock on the extremities of the Norfolk Broads – which you might have thought of as a tidal network of navigable rivers, and not the sort of place to come across a lock.

Historically the Broads system of Norfolk and Suffolk was indeed a tidal network of rivers plus the actual ‘broads’ – lakes formed from flooded peat workings – but in the 18th century, there were there successful schemes to extend navigation further inland by creating non-tidal routes. Firstly, at the northern fringe of Broadland was the North Walsham & Dilham Canal, an artificial waterway based on the River Ant whose history and restoration we have already covered in detail in Canal Boat (see May 2017 issue).

Coming a little further south, the Aylsham Navigation enabled boats to continue upstream on the River Bure from today’s head of navigation at Coltishall through four locks to reach Aylsham – until flood damage in 1912 led to the abandonment of the locks.

Finally the southernmost of the three was the River Waveney, which was naturally navigable from Beccles down to where it met the River Yare at the head of Breydon Water, a large expanse of water and tidal mudflats leading to Great Yarmouth and the North Sea.

At the top end of the river, three locks were built as early as 1670, enabling wherries (the traditional sailing barges of the area) to continue up the Waveney above Beccles to reach Bungay.

Further work in subsequent centuries saw the creation of a link from the tidal Waveney to Lowestoft via Mutford Lock (now the only working lock on the Broads), as well as the construction of Hadiscoe New Cut, a short-cut to the River Yare as part of a (commercially unsuccessful) scheme to encourage trade down the Yare from Norwich to use the port of Lowestoft rather than Yarmouth. But while both of these links survive and are used by today’s leisure boaters, the upper length of the Waveney including the three locks above Beccles went out of use and was abandoned in 1934.

Since then, the upper two locks at Wainford and Ellingham have been replaced by sluices with only some traces of one of the locks remaining, but the lowest lock, Geldeston Lock at the head of the tidal length, still survives (and is even accompanied by a surviving pub, The Locks).

How much longer it would have survived is doubtful, though, as its age and the lack of any maintenance since around 1910 had left it in poor condition and at risk of complete collapse – and owners the Environment Agency would be highly unlikely to provide any funds to repair it.

Hence the River Waveney Trust’s interest in preserving and restoring what remains, as the unique surviving structure from a little-known 17th century river navigation scheme.

And hence our presence on that scaffolding platform, watching the water level as it rises beneath our feet. The first two days of the Canal Camp have already dismantled the loose and damaged brickwork from a considerable length of the south wall, down to a solid base. As ever, it’s been tricky to decide exactly where to stop: every brick you remove tends to loosen the ones below it if you’re not careful. But in this case, the level of high tide puts a limit on how much we can dismantle.

With the brickwork having been eroded, patched, repaired and rebuilt at various times, it’s also tricky to know what profile to rebuild it to. The existing courses aren’t exactly level, either. Oh, and to make it even trickier, the lock walls bow out considerably in the middle of the chamber, so we can’t lay the bricks to a string line or a straight edge.

Still, a couple of hours work sees the team – myself, WRG old hand Mick, and new volunteer Esther – get enough bricks laid that we’re starting to get the base of the rebuilt wall into a state where it’s reasonably level and follows something like an even curve, giving a profile that the rest of the week’s camp can follow.

Meanwhile the rest of the team keep us supplied with bricks and mortar and carry on cleaning the old bricks for reuse. And the tide continues to rise.

A couple of boats, including a small open passenger ferry from Beccles, arrive at the mooring below the lock, reminding us that it is still a navigable river up to this point.

So is the plan to reopen the lock to navigation? No, in fact there would be no point, as there is no longer a weir or change in level – and small craft such as canoes continue further up river.

So why restore it? Partly because of its historic status; partly also in connection with a wherry called Albion. Now preserved by the Norfolk Wherry Trust, she is one of only two such trading craft left, and uniquely she was built on and specifically for the Waveney by the river navigation’s then owners, to a size that fitted the locks.

Wouldn’t a restored lock be a really suitable place to for her to visit, and to sometimes spend time moored when she isn’t travelling? That’s the plan, and that’s why the River Waveney Trust – an environmental organisation which cares for the river and its ecology as well as taking an interest in its history – launched the Geldeston Lock Project. The Trust’s Beccles group began a fundraising drive towards the £15,000 cost – which has involved everything from one of their volunteers planning a sponsored sky-dive over Beccles this coming October to an ongoing ‘buy-a-brick’ public appeal – and got in touch with WRG via its parent body the Inland Waterways Association for help with the practical side of rebuilding the lock.

Coupled with the canalside pub and areas of woodland owned by the Trust plus a canoe launch site recently created, the restored lock and wherry Albion could one day make for a fine local destination. And our week is the first practical work towards this vision.

Or rather we hope it is. But as we break for lunch, disaster strikes. Typical of summer 2017, a sudden torrential downpour sends us rushing for the shelter of our gazebo where we huddle together sipping our tea and munching our sandwiches while the heavens open and the thunder echoes around us.

But WRG volunteers are a stoical lot, and once the rain eases off a little (after an hour or so), the leaders venture out to take a look at how our brickwork’s standing up. It’s not good news. The downpour has swollen the waters of the river, which combined with it being high tide – and a spring tide at that – has contrived to put our new brickwork under water.

Our scaffolding boards are threatening to float away, it’s obvious that the water level isn’t going to fall significantly for quite some time, and there’s nothing for it but to knock off early, pack up our kit, and return to the canal camp accommodation in a clubhouse (coincidentally alongside the original head of navigation) at Bungay and hope for better weather.

I’m only helping out for the day and have to go home, but the pictures somebody posts online from the following day don’t look too promising – they appear to depict some of the volunteers drowning their sorrows (cocktails and steel toecap boots are a nice combination) in The Locks inn after another early finish.

But on the following day it brightens up, and the scaffolding platform stays above water for long enough for work to go on. By the end of the week, some considerable progress has been made – if not quite what would have been possible if the weather had been less dire. But this is the first stage. The second stage next year (and despite everything, the WRG volunteers seem keen to return) should see another camp aim to complete this side of the lock. Stage three will tackle the other chamber wall, generally thought to be in better condition.

All being well, in three years’ time, there could be a restored lock with a restored wherry berthed in it. And that’s not bad for a site where without this attention, the lock could finally have succumbed to the effects of the years’ decay and the rising and falling waters because time and tide wait for no man…

To find out more and to support the River Waveney Trust’s efforts to raise funds for the restoration, see rwt.tidyhq.com