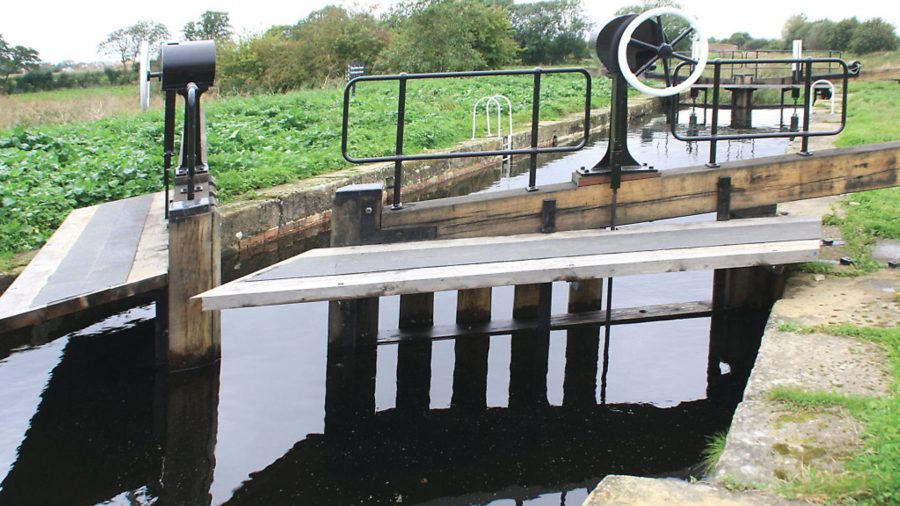 East Yorkshire’s Pocklington Canal restoration has been rather a ‘stop / go’ project over the years. But now things are finally coming together, with a reopening in prospect

“Just about the easiest restoration in the country” is how Paul Waddington describes the canal which links the Yorkshire Derwent to the East Riding town of Pocklington. This may come as a bit of surprise, given that canal restoration groups like the Pocklington Canal Amenity Society (which he chairs) often feel the need to list the major challenges facing their reopening plans, by way of explaining why our readers won’t be cruising through the newly restored waterway for some years yet.

But he has a good point: the Pocklington Canal was never officially abandoned; has no major obstacles such as lowered bridges; hasn’t been filled in or built on anywhere; its lock chambers survived in a condition where they could be repaired rather than completely rebuilt; and over half of the modest nine mile length has already been reopened.

So if it’s that easy, why has it taken almost five decades to get this far? And how can we be sure that it won’t take another five to complete it? To get an idea of the reasons, let’s delve back into the restoration’s history…

And it’s been a rather stop / go kind of history. Following a successful campaign in 1959 supported by the Inland Waterways Association to prevent the canal (which had lain unused since the 1930s) from being filled in with sewage sludge, PCAS was formed in 1969. Local farmer Eric Lount saw a piece on television about the Operation Ashton ‘big dig’ volunteer working party, part of the Cheshire Ring campaign which was in full swing at the time, and contacted other local waterway supporters with a view to getting something similar going on the Pocklington.

For the first five years, progress was rapid: a great deal of scrub-clearance along the route was carried out by well-attended working parties, Cottingwith Lock (the entrance lock from the River Derwent) was returned to working order, and the first length was reopened to boats. With support from the East Riding Council and British Waterways, prospects looked good.

But then it all came to a grinding halt. Why? Largely because of a change of stance in BW from a “Why not let them try?” attitude by local manager Ian Walker, to a more cautious high-level steer along the lines that BW should not be supporting anything which could land it with a maintenance liability. A frustrating decade saw the scheme in the doldrums, with plenty of meetings with BW, but not much progress on the ground.

But then in the mid-1980s things got going again, and this time it was thanks to the various Government-backed job creation and youth training schemes aimed at putting young people into work at a time of high unemployment. This rejuvenated the Pocklington restoration, and led to reopening as far the short arm of the canal at Melbourne village, marked by a celebration in 1987 with BW head Brian Dice cutting the tape.

A Waterway Recovery Group week-long volunteer camp in 1987 (the first of a great deal of WRG support for the canal) saw work begin at Canal Head, the attractive terminus basin on the edge of Pocklington and the adjacent Top Lock, while Thornton and Walbut locks were the next to receive attention.

But then the brakes went on again. And once again, it was the maintenance issue within BW. There was to be no more restoration and reopening without a 10-15 year maintenance funding agreement with the local authority. And in the meantime another issue had arisen: the canal’s nature conservation value – it had become a refuge for rare aquatic plants as similar wetlands elsewhere had declined; a breeding ground for water birds; an important site for invertebrates including dragonflies and damselflies; and a home to voles and otters.

Parts of the canal had already been included in two local SSSIs (sites of special scientific interest) covering the water meadows at the western end of the canal; in 1988 following a full survey by the then Nature Conservancy Council (now Natural England), almost all of the rest of the canal received the same designation. This led to serious differences of view between those who wanted to reopen the canal to navigation, and those who sought to prevent boats from potentially harming its nature conservation value. And the latter group appeared to hold all the trump cards when it came to dictating what could and could not be done in these designated areas, to the point of refusing to allow further reopenings, and only permitting restoration if it could be shown to be positively beneficial for wildlife (with canal restoration interests not helped by BW not always taking much of a pro-navigation stance).

While restoration came to a standstill again, PCAS moved on in a different direction. Donated a narrowboat shell (from a part-completed project), the Society’s volunteers completed the fit-out and began operating public boat trips which continue to this day. This brought new life to the Society, raised funds, and attracted new members – but didn’t get any more canal restored.

However over the last decade, and continuing through the change from BW to the Canal & River Trust, the pendulum has once again swung towards getting restoration going. A funding bid the Heritage Lottery Fund was initiated by CRT, which would have paid for plenty of restoration work – but was turned down by HLF. However a subsequent bid, which (on HLF advice) concentrates on improving wildlife habitats and protecting historic structures, was successful. As a result, a £½m three-year project titled ‘Gem in the Landscape’ is currently under way.

Having read about the conflict of interest in previous paragraphs, you might think that an HLF grant mainly for nature and heritage protection won’t provide much support for canal reopening – indeed, that it might actually reduce its prospects. But the stance of the nature conservation interests has changed, along with that of BW and its successor.

Speaking on the subject, Natural England’s Simon Christian (Lead Conservation and Land Management Advisor, and the key contact for the Pocklington Canal) accepted that the canal’s biodiversity had declined since the SSSI designation – more so on the length that’s still to be restored than on the navigable length – with treated sewage inflows and water run-off from agricultural land more serious issues than any possible harm from boats. Further, he agreed that without PCAS there would have been no canal for his organisation to protect; that NE and its predecessors had been ‘over-protective’ in their anti-navigation views in past; and that on a quiet, out-of-the-way waterway like the Pocklington (only accessible via the tidal Yorkshire Ouse) it was unlikely that boat numbers would reach the level where they would impact its wildlife value.

At the same time, PCAS launched a £250,000 Bicentenary Appeal to raise funds to reopen the next two miles of canal as far as the Bielby Arm. And a real positive sign of a change of stance by nature conservation interests is that NE has given its blessing to this work.

But there’s more: the nature conservation element of the Gem in the Landscape scheme includes dealing with weed and reeds which are taking over some lengths of canal at the expense of the rarer species (and causing the decline in biodiversity mentioned above) by dredging the channel. Not to full original profile, but certainly to a standard which will assist navigation.

This means that as regards restoring and reopening the canal, the HLF Gem in the Landscape and PCAS Bicentenary Appeal schemes are very much complementary. The HLF funded work is covering dredging of several lengths spread along the canal, including much of the two miles from Melbourne to Bielby (as well as parts of the yet to be restored section beyond Bielby). Meanwhile, thanks to over £100,000 from IWA’s Tony Harrison Legacy which has topped-up its appeal fund, PCAS is making good progress with completion of the restoration of the two locks on this length. Thornton Lock has been repaired and fitted with new gates, and PCAS is moving to Walbut Lock, last worked on around the 1990s, to bring it up to standard. And at the same time Church Bridge, also on this length, has benefited from the ‘built heritage’ part of the HLF scheme, with the removal of earlier repairs in inappropriate cement mortar which were causing damage to the brickwork, and restoration with traditional lime mortar.

The aim is that it will all come together in time for an opening to Bielby in 2018. But PCAS is already looking further ahead. Paul Waddington is looking forward to more support from WRG in the future as work moves on to the final two and a half miles from Bielby to Canal Head. With Coates Lock and Top Lock already restored, Sandhill Lock is next on the list – and could be a major WRG project in the next couple of years. It’s not going to be an easy one, with a lower wing wall breaking away, and wooden bracing installed in the chamber as a guard against possible collapses. But a recent WRG site visit elicited the comment that “We’ve restored locks from a lot worse condition than this.”

That would leave just two locks (Giles and Silburn) to restore, plus about a mile and a quarter of channel. Given the support of WRG and the new-found spirit of cooperation with nature interests, is it too much to hope for a full reopening sometime within the next ten years? It is, after all, ‘just about the easiest in the country’…