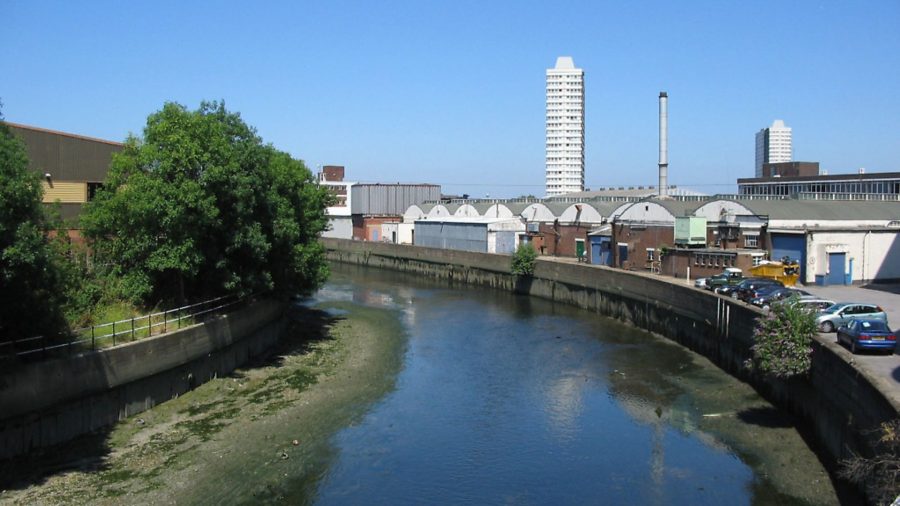 We visit Carpenters Road Lock in East London, the only lock in the country with two radial guillotine gates, and the last link in the opening up of the area’s waterways

Carpenters Road in East London is one of the more unusual canal restoration work sites. We aren’t talking about volunteers rescuing crumbling lock chambers and dry ditches from disappearing under the undergrowth of the English countryside here. No, as project manager Colin >>> unlocks the gate and lets me into the compound surrounding the 1930s concrete lock chamber I can look around and see the main 2012 Olympic stadium (now West Ham’s football ground), the Westfield shopping centre a little way away, and plenty of local people strolling around on the high- and low-level walkways that allow public access to the network of former millstreams and tidal channels known as the Bow Back Rivers.

It’s a far cry from how the site appeared when I first explored it in the 1980s. Then, the area was what Colin describes as “Fridge city”, with scrap-dealers and car-breakers surrounding the semi-derelict waterways on either side of the inoperable lock. So what happened? Well, obviously the Olympic Games happened – but the story began a long time before that.

Note that I said ‘semi-derelict’: in theory the waterways on both sides of the lock were navigable, and a few intrepid souls (encouraged by organisations such as the Inland Waterways Association’s London Branch and St Pancras Cruising Club) did occasionally venture into them. The waterways on the uphill side of the lock (the Old River Lee, City Mill River and St Thomas’ Creek) formed a circuit leading off the Lee Navigation, and a 1987 IWA rally at Bromley by Bow saw campaign cruises attempt the loop from both directions, before giving up hard aground on the silt.

A subsequent attempt, aimed at publicising the unnavigable condition of the waterways to the then British Waterways (who had some responsibility for these channels, but apparently no obligation to maintain them to navigable standard), backfired slightly when we actually got round the ring – albeit with a great struggle. Subsequent dredging improved matters, but they only silted up again, because in those days the circuit (along with the lower Lee, Limehouse Cut and Limehouse Basin) was semi-tidal, and the tides brought in silt.

Below Carpenters Road Lock, navigation was even trickier. Waterworks River was fully tidal: at low water it dried out to a muddy trickle; at high water there wasn’t headroom under the bridges for anything bigger than a dinghy, and the only access was via Bow Locks – so the timing was critical on the occasional campaign cruise that made it up there.

The lock itself was unused and inoperable – indeed, it is said that it had hardly been used since it was built in the 1930s. However its unique pair of radial guillotine lock gates (ones which rise to open, but not vertically – they swivel upwards on pivots set in the locksides) and their operating mechanism were still intact. A legendary bunch of extreme boating enthusiasts known as the Odd Boats Society had even somehow managed to get a boat through it sometime in the 1970s. But given the state of the waterways on either side, it would have taken some powers of persuasion to put the case for restoring it.

A major improvement came in 2000 when (following rebuilding of Limehouse Basin entrance lock and modification of Bow Locks) the tide was excluded from all the formerly semi-tidal parts of the Bow Back Rivers, lower Lee and Limehouse Cut. This meant that the circuit could be dredged without immediately silting up again. It also marked the beginning of BW’s interest in opening up the waterways in the area – including restoring Carpenters Road Lock and the more conventional City Mill Lock. However there would still be the issue of the waterways below the locks being tidal – and to change that would be expensive.

Come 2005, and the announcement that London’s bid to host the 2012 Games had been successful, and these aspirations suddenly looked much more possible. Indeed, in the early days of Olympic planning, so did a lot of other ideas: there were new canals proposed, and reopenings of filled-in channels.

The more exotic proposals disappeared as the plans developed; one length of theoretically navigable water (the truncated surviving length of the Pudding Mill River) was actually filled in; even the proposals to revive the surviving Bow Back Rivers weren’t universally popular among waterways enthusiasts, as what had been a run-down industrial area was actually becoming a ‘semi-wild’ derelict area with a certain attractiveness – and this would inevitably be lost in its transformation into the main Olympic site.

One important element that remained in the plans was the construction of Three Mills (originally Prescott) Lock and associated tidal barriers. Originally intended to help the ‘green Games’ to use water transport for building materials (which never happened to any great extent), this resulted in the entire length of Prescott Channel, Waterworks River and the northern part of the Old River Lee becoming non-tidal. What’s more, its water level was set at a height which would provide both sufficient draft and adequate headroom under the bridges. It would mean that restoring City Mill Lock and Carpenters Road Lock would at last be able to connect together two lengths of reliably navigable water.

That wasn’t the only change during the build-up to the Olympics: the high concrete sides of some channels were replaced by softer edges and by high-level and low-level waterside walkways, and a great deal of silt was dredged away. But as Colin explains, although restoring Carpenters Road Lock had “verbal support”, it wasn’t on the Olympic Delivery Authority’s “critical path” – which was more about getting people in and out of the venues, including building a temporary bridge deck over the lock. This meant the removal of its superstructure: the gates and mechanisms were dismantled and stored, while the concrete and masonry was demolished.

Post-2012, with the change from Games preparations to Olympic Legacy work, and also the transfer from BW to the Canal & River Trust, efforts to secure funding for Carpenters Road continued. One slightly unlikely-sounding source was HS1 (the high speed rail link from London to the Channel Tunnel) which benefited from its flood control function; for the remainder of the cash, bids to the Heritage Lottery Fund were finally successful at the third attempt.

At long last, work could begin on what (following the reopening of the relatively straightforward City Mill Lock) had become the final missing link in East London’s waterway network.

So much for the background; how has the actual work gone?

The good news has been that once the decades’ worth of silt had been removed, the 1930s concrete of the lock chamber turned out to be in generally good condition. Only the tops of the concrete blocks forming the copings of the chamber walls were worn, and the contractors have been careful to re-cast the top few inches to match the original appearance – this might be a modern lock by most standards, but it’s still a Heritage Lottery Fund project, with a need to pay attention to its original appearance.

The bad news is that most of the metalwork has needed to be replaced. New curved stainless steel plates on the chamber walls that the radial guillotine gates will seal against have been installed (it was felt ‘less traumatic’ to fit the new ones directly to the chamber walls rather than to attempt to remove and replace the old ones which were located in recesses in the walls). New steel baseplates where the gates will meet the base of the lock have also been fitted. The existing gate pivot brackets were retained, but with new pins fitted. And the old counterweights were extracted, disassembled, and the pulleys replaced.

The remainder is pretty much all new: the old gates were beyond restoration and were taken out in 2014, and have been carefully measured and copied – but the replacements have been built in three sections that can be put together ‘Meccano-style’ on-site. (This method was originally adopted with a view to assembling and installing them while the Olympic works were still going on overhead; in the event this didn’t happen, but the ability to deliver them in sections and assemble them on site makes the job easier.) A trial assembly at the Sheffield steelworks was due to be followed by delivery and installation over a week in late May.

Once the gates are in, the equipment to open them can be installed. That involves putting the counterweights back in their pits, installing the gantries to support the mechanisms, adding the four cables per gate (two to connect them to the counterweights, two to connect them to the winding drums) and installing the motors and control gear: it will be electric only – as Colin puts it, you’d need ‘Popeye muscles’ to do it by hand. Despite the modern materials (including stainless and Corten steels), the aim is to match the 1930s appearance (down to digging out original pictures from Ransomes and Rapier who built the original gates, and studying the last River Nene lock with a similar gate at Ditchford), and to keep the mechanism as visible as it would have been originally.

Then it’s down to the finishing touches: adjust the seals for watertightness, train the lock operators (CRT staff and dedicated volunteers – the Trust feels that as a structure with a possible flood defence role in connection with the HS1 railway, it should be keeper-operated rather than boater-operated) – and organise the opening party.

That happens on August Bank Holiday, and two of the groups – London IWA and SPCC – who saw some potential in these unloved and unused channels all those years ago, will be helping to celebrate the reopening of their last link.