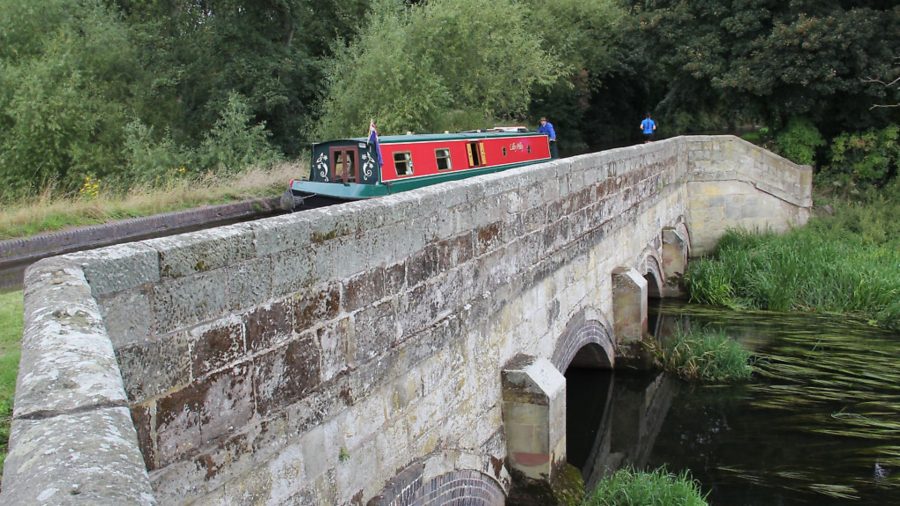 Subtitled Exploring their Architectural and Engineering Wonders, Canal Boat contributors Derek Pratt and Anthony Burton’s new book puts across how the many elements combine to make our waterways special – from the grandest aqueduct to the humblest lock cottage

“We are fortunate that the great age of canal construction, from 1760 to the early years of the 19th century, coincided with one of the greatest periods of British architecture – the Georgian age.”

Waterways author (and writer of history articles for Canal Boat) contributor Anthony Burton penned those words as part of the introduction to a new book, a collaboration with top waterways photographer and long-time Canal Boat contributor Derek Pratt.

Britain’s Canals: Exploring their Architectural and Engineering Wonders takes us through the various different forms of construction work which went into that period of canal building. There are chapters covering the locks, the aqueducts, the bridges and the tunnels, with Tony’s words and Derek’s pictures clearly putting across the differences between the early period and the later days, such as the change from stone and brick to ironwork, and the bolder engineering of the newer canals. But there are also the less obvious aspects: the canal company buildings; the reservoirs and other ways that water was fed to the canals; the waterside industries that they were built to serve, and the decisions made when laying out the route of the canal. All of these elements go together to give the canals their special appeal.

It isn’t just about the great feats of engineering – such as the long tunnels and high aqueducts – because as the author says, “often it is the very simplest structures that carry the strongest message”. On the following pages, we’ve chosen a selection of Derek’s superb photographs, and captioned them from Tony’s words. As they say, “our hope is that readers come away with a new appreciation of the historic structures that give our canals their unique character”.

Hatton Locks on the Grand Union are an imposing flightsince they were widened in the 1930s. But innovation did not end there. A new material was used – concrete – and enclosed paddle gear was introduced. On the other hand, Lapworth Locks on the Stratford are still as built 200 years ago, complete with barrel-roofed keeper’s cottage – no one is altogether sure why.

The aqueduct taking the Staffs & Worcs Canal over the River Sow is a typical early stone one built by James Brindley: a practical structure that has stood the test of time, but hardly a thing of grace and beauty. Contrast this with the later lightweight cast iron structure at Edstone on the Stratford Canal by William James, albeit still a practical rather than an elegant structure.

Generally, bridge design was visually attractive but dictated by practical necessities – and none more so than the Macclesfield’s ‘snake bridges’, an elegant solution to the problem of getting the horse across where the towpath changes sides, without detaching the rope. But just occasionally, a more ornate bridge was built, in this case to carry the driveway to a mansion.

No study of the canals would be complete without considering the industries they were built to serve. Below, when the Rochdale arrived at Hebden Bridge, industrialists immediately began building new textile mills alongside the waterway, while a water- powered flint mill was set up beside the Caldon Canal at Cheddleton to grind flint for the Staffordshire potteries.

Before work could begin, the engineer would lay down the line a canal would take. In the early years, it would typically follow the contours to cut down on the need for earthworks, like this view of the Leeds & Liverpool at Greenberfield taking an extravagant curve around a hillock. Compare this with the later Shropshire Union, where cuttings are deep gashes in the land, while embankments ride high above the country.

For engineers, canal tunnels could be a nightmare. James Brindley, faced with digging through Harecastle HIll on the Trent & Mersey, halved the ideal width (giving us the 7ft-beam narrowboat) but it still took 11 years to dig – and he died before it was finished. But no less troublesome were some of the high embankments and deep cuttings like the vast one at Laggan on the Caledonian.

Often overlooked are the many buildings associated with the canals. But it’s hard to miss the former Kennet & Avon Canal Company offices housed in this splendid Georgian building straddling the canal in Bath. Meanwhile Stourport was a Georgian new town owing its existence to the canal.

Britain’s Canals: Exploring their Architectural and Engineering Wonders by Anthony Burton and Derek Pratt is published by Adlard Coles, available in bookshops at £18.99 or online at bloomsbury.com/britainscanals for the reduced price of £17.09. ISBN: 9781472971951

For your chance to win one of five copies of this book, click here.