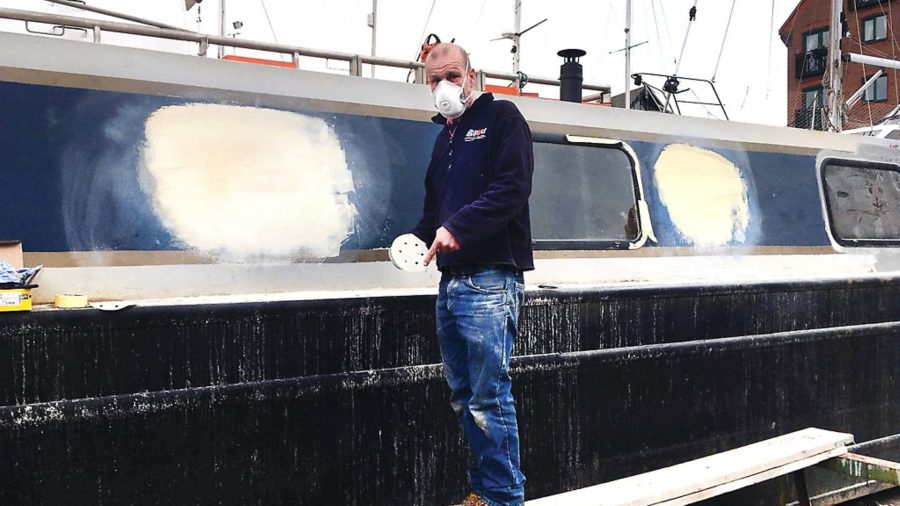 When Alan and Patricia Cosnett moored for the last time and left the waterways behind, they took their wanderlust with them and hit the road in a motorhome, using their beloved boat to bag a bargain… and switching from 68ft to 20ft

After an accident, I could not use our small triple hull dory on coastal waters. So a friend David suggested we put it on the Staffs & Worcs Canal at Kinver near Hyde Lock, where he lived on his steel narrowboat Barracuda, formerly one half of the River Class working butty Fal.

He was the commissionaire at the entrance to the company where I worked as a construction engineer managing petrochemical furnace design.

Installations took me to many places in Europe, Canada and America and as I left the office to catch for one particular flight, I told David not to sell his boat before I got back. On my return, I had a late call from David asking if we wanted his boat.

As I was leaving again the next day I said “yes we will have a look at it tonight” so at midnight we all went down to his boat with my builder’s lump hammer and tested the hull along the waterline and below. I told him that “if it is still floating in the morning I would give him the money then”. He had his money and we had our canal boat at last.

From 1986 to 2001, we searched for – and found – most of the River Class boats but never a mention of the Fal until someone suggested we go to see the man who cut the butty up to make the Barracuda and the Seeker at Tardebigge. As luck would have it he had left just before we arrived with the Barracuda; however we were given a copy of the original holiday brochure showing both boats. In 2001, we decided to extend the Barracuda from 54ft to 68ft and rename her to her original name of Fal. The registration number remained as 66470.

The Lister SR3 – which became known as Ivor the Engine – was stripped, rebuilt and mounted in the engine room after the back cabin and before the toilet and shower room.

A new propeller and stern gear were fitted, the 12V electrics were upgraded to 240V. Work was completed on the bedroom, open lounge and forward lounge which was heated by a Jotul woodburner. The boatman’s cabin was warmed by a diesel heater.

In 2003, Patricia was concerned about the boat survey but the surveyor – a Mr ME Braine – told her: “My dear, this boat is as sound as the day it was built. It is British Steel, not Japanese.”

We enjoyed the canals with our two daughters and had many adventures on the silver highway, though using canals at night would no doubt be frowned upon these days.

Since we part-exchanged her for a motor home, the Fal has gained a longer stern deck for a better cruiser set-up with the Lister back under the counter as it was when originally converted at Tardebigge. The boatman’s cabin is now removed and the port hole type windows have been replaced in the lounge area.

The Fal lives on.

The pig lives on to cruise another day

The Fal was made for British Waterways around 1959, at EC.Jones of Brentford as a butty to be towed by a powered motor narrowboat such as the Admiral Class.

Some 13 boats known as River Class were built andnamed after three-lettered rivers such as Cam, Fal, and Yeo. They were bluff-bowed with a Dutch design and pushed water in front front of them, not cutting the water as the older canal narrowboats did so well.

The boats were known as ‘Blue Tops’ due to the fibreglass coverings over the holds but the people working the boats named them ‘Pigs’’ as they were difficult to steer. They were part of the British Waterways fleet, working between the south and Birmingham, often carrying coal in one direction and cement in the other.

The Cosnetts found evidence of both cargoes when they chipped away and renovated her hull, many, many years ago.

The big freeze of 1962-3 forced the demise of the BW fleet and the sale of many boats, and the Fal went to a boatyyard at the top of Tardebigge Locks. It was here that the Fal was cut into two as the era of canal boat holiday hire arrived.

The Fal became a family favourite and enabled the Cosnetts to enjoy many adventures on the waterways network. When the Cosnetts left the waterways, they took with them their passion for travel and switched to four wheels. But the Fal lives on; it was part-exchanged for their new motor home and has undergone an £80,000 overhaul at Bluepoint Marina.

She is almost finished and ready to go to her new owners, who have snapped up a piece of canal history.