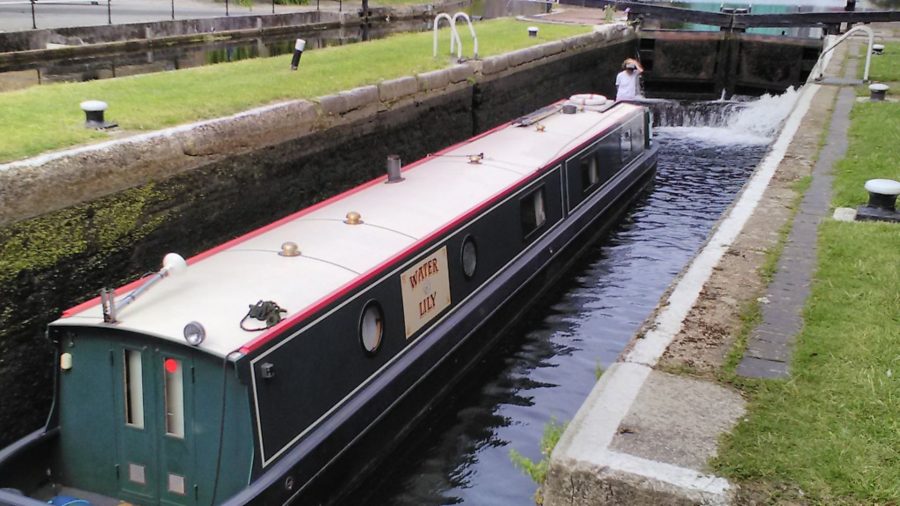 I came to boating late in life, I was looking for a short term stop gap between houses, and I kept seeing a phrase in various places in the paper and on the internet which caught my eye, it was low cost living option.

When I discovered it meant buying and living on a narrowboat I thought, well I can do that, having lived in a caravan, been self-sufficient, built a house, set off to cycle around the world. It held no terror, only a new adventure.

I could bring it down to the Gloucester-Sharpness Canal to be near my ailing mother and stay on it for a just year or so until I decided where to buy my next house. Some seven years and two boats later I’m still here. Not knowing anything about sailing a narrowboat, I set off on a dark, cold November day and it was a baptism of fire with winter stoppages, failed weirs, ice breaking and was frozen in.

I loved it all and wished my grandfather had seen the boat, he was a Freeman of the River Thames, having been a lighterman after a six-year apprenticeship to a master during the World War One — I think the watery life has missed a generation and come down to me.

Every few years, I set off for a trip and in 2017 went away for about 15 months, single handed (although with an elderly whippet in tow) on my 60ft cruiser stern narrowboat. It’s always trepidatious to lock out of Gloucester Docks onto the River Severn but needs must and the lock keepers advise on river conditions and tides.

The river was running very fast and the level was just onto the red zone coming into Diglis! Made my way leisurely to Stoke Prior where friends came to meet me and we then set off up the mighty Tardebigge flight of 35 locks.

It took about six hours but we had a great day with a picnic at the top and I was really grateful for the company. I find that friends always want to visit as it’s such an unusual holiday for them but normal daily life for me so it works perfectly. I love the long slow climb of 20 or 30 locks up a hill, a summit or tunnel, then a descend, you really get a sense of the landscape.

You see wonderful wildlife when there are no humans about, a stoat running across a lock gate, kingfishers, red kites, a swimming grass snake. Coming under a bridge one morning I could hear lots of high pitched squeaking, I looked round to see two weasels chasing each other and having a scrap, it was like a tom and jerry cartoon. Some terns were dive bombing a heron, then I realised it was eating one of their chicks on the bank. I shared a lock at the top of the Caen Hill flight with an otter, the first one I have ever seen.

I moored in fields of cows a few times and I’ve gone off them! They started to chew the boat, no sooner had I chased them off the front they’re at the back nibbling away. I was out at 6am running up and down in dressing gown and slippers! . One was so keen it actually fell into the river and got stuck between the bank and the boat, it looked like a massive hairy fender and had to swim about 200 yards to get out.

I got wet in the Wast Hill tunnel but in the very hot summer the drips and water from the tunnel turned to steam on the boiling hot steel roof of the boat, so I was going along in clouds of steam. I used to be nervous of tunnels but I’ve grown to love them, even the Harecastle where they shut a big door behind you, so it feels like you’re trapped in.

Some narrow canals have lots of lift bridges but luckily most are left open although I persuaded a chap having a picnic to open one for me once and have resorted to asking walkers, cyclists and runners.

I was stuck on the mud one morning waking up at an alarming angle, but luckily a passing boat pulled me off. Another time I woke up adrift as passing boats whizzing by had pulled my mooring stakes out. I much prefer the narrow canals to wide waterways, although I lose the benefit of sharing locks. I moored up near a hire boat company and four boats in a row went past full of lads drinking on stag parties.

Only two of them hit me, but another group on a widebeam boat got caught inside the top lock gate and lifted it clean out of its housing. More work for the CRT.

I turned west onto the Thames from the Oxford Canal as I wanted to see the other end of the Thames and Severn where it joins up at Lechlade; hopefully one day we’ll be sailing directly from Saul.

I volunteer on the restoration of the 36-mile section of derelict canal from Saul on the G&S to Lechlade on the Thames. I discovered the Cotswold Canal Trust a few weeks after moving down to Stroud and have never looked back; what a fantastic bunch they are. Some of the rivers and canals are so twisty and turny, but have lots of overhanging branches, It makes me realise how well we maintain the Stroudwater, with not a hair out of place.

The Thames lock keepers open the locks for you, tend their beautiful gardens and care for their lovely cottages. It lulls you into thinking it’s all so civilised; then I turned onto the Kennet and Avon at Reading, and straightaway back into hard work on the locks.

And what hard work it is, not only huge locks, but heavy gates, stiff paddle gear, and if that wasn’t enough, hundreds of swing bridges, which makes travelling anywhere twice as slow.

But it is what it is and I didn’t even retaliate when a woman in a car waiting for me to close a swing bridge started beeping her horn. I had tied up before the bridge, gone to set the lock, then stopped traffic and swung bridge, gone to get the boat and sailed through the bridge into lock, climbed up, tied up, gone back to swing the bridge.

All fine until she started beeping so I walked over to apologise for the delay but before I could draw breath came a tirade of “hurry up and shut that f****** bridge, I want to f****** get home, I pay to be on the f****** roads” and lots more of the same. I saw a boat in the distance so waved it on to come into the lock with me and she went berserk. Don’t let that f****** boat in etc, so I just waved it in and went as slowly as possible. Canal rage, it’s a new one on me!

The flight down through Bath has one of the deepest locks in the country, at 19ft 6ins deep, what a long ladder that is, then I turned right just to have a little trip up to Pulteney Weir. Walking into town we met a chap with a telescope trained on the church tower opposite and asked to have a look. There was a family of peregrine falcons, seemingly so close you could touch them. I moored in Bristol harbour opposite the SS Great Britain. Lots of hustle and bustle there in stark contrast to the middle of nowhere on the beautiful river Avon. I love it when approaching a lock and you see the familiar uniform of the CRT volunteers, always helpful and pleasant, such a treat for a single hander.

I have a routine doing the locks, I don’t jump across gates, I take it steady and check things. I had a very nasty scare nearly falling in a lock on the GU and it was such a wake-up call, I could have died, nobody about, no lifejacket on. Things changed after that.

Had a good old dose of history coming down the Thames towards London, taking in Windsor Castle, Runnymede, Hampton Court, Kew Gardens. The river is pretty and very clear and at some points it was packed with swimmers, dinghies, paddle boarders, canoeists, rowing boats, plastic boats, gin palaces, paddle steamers, trip boats, barges and narrow boats all at the same time. Brilliant. Came through Henley right down the middle of the regatta course, I think I won the coxless pairs.

I went through Teddington lock (longest lock on the non-tidal Thames at a whopping 265ft long) at 8am to catch the high tide at 8.15. I thought I had plenty of time to get down to Brentford which takes about 45 minutes, but I was dawdling as usual and as the lock cut is not well marked and goes right back on itself,

I overshot it. I began to turn and realised how fast the tide was running out as I was going sideways, finally got round and started going backwards, had a small moment of panic as I pushed the accelerator full blast and hardly moved, eek,

Just about made it into the lock cut and had to act very nonchalantly as if I do that sort of thing every day, when inside I was exhausted with panic and adrenalin. Coming into London it gets busier and busier on the water and the towpath, lots of tents with rough sleepers, very dodgy looking boats with unpleasant smells, and even, wait for it, a dead body at the side of my boat in Paddington. I really have seen it all now.

There are lovely towns and villages to visit, every day is different, and the canals all seems to have their own distinctiveness. People say it must be odd being in a different place every night but I’m in my little home every night but with a new view which is wonderful, canals in towns and cities are like hidden green tunnels, you run up the steps to the road and can’t believe the noise and chaos above you.

Everyone on a boat is part of the same club, we all have a chat at locks, with anecdotes and advice, I love travelling about seeing our wonderful countryside, the Anderton boat lift, the tunnels, the bridges, buildings, bottle kilns, but all eclipsed by the Pontysycllte aqueduct near Llangollen.

I loved it so much I stayed for about a week going backwards and forwards. I quite often think I’m hardly getting anywhere and then suddenly I’ve done the GU, North Oxford, Coventry and on to the Trent and Mersey, that stretch has the nicest canals I’ve been along, although hopefully my next trip will be the north and the Leeds Liverpool. I love the time away but always feel a sense of “Oh I’m home” when I get back to the G&S. Give me a couple of years and I’ll be off again.