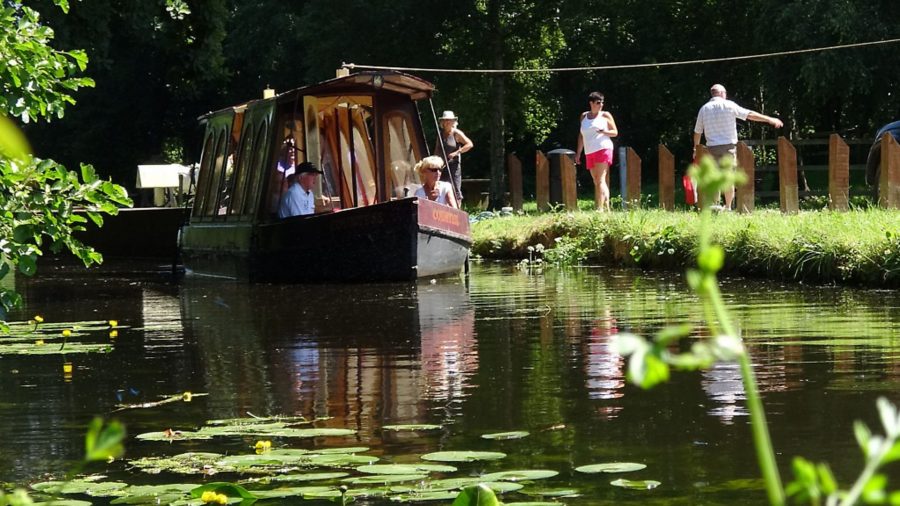 Cruising to the calming clip-clop of a plucky pony pulling the packet boat, David Johns finds himself musing over the bright side of liveaboard life

I can’t abide EastEnders. Everybody always screaming and shouting at each other, arguments, hatred, tempers, tantrums; it’s an absolute mystery why anyone should want to watch that depressing cacophony day after day.

Yet it finally made sense as to why the writers script it this way when the first draft of this article was begun. You see last month, you may recall, I was in somewhat grumpy mood having banged my head (again) on the bow door frame upon exiting the boat. I promised I’d make up for the catalogue of Bad Things About Living Aboard that I compiled by doing the converse list this time round.

So in a rare burst of gritty determination to keep my vow, I started scribbling Five Reasons Why Narrowboating Is Absolutely Lovely And You Should Live Aboard Immediately.

This included the usual topics such as the peace and tranquillity of the waterways, the gentle burble of the water under the boat as you travel, the variety of wildlife you can see and interact with – quite literally all creatures great and small. The people you meet are (largely) lovely and friendly; the destinations you can reach by boat are multiple and diverse, with sights that you wouldn’t normally see in a car. Even the weather is better on a boat no matter if it’s glorious sunshine or torrential downpours. The way of life is relaxed, charming and the ultimate antidote to the pressures of modern existence.

But here’s the thing. As I wrote in high praise of pretty much everything, the realisation dawned that what was being said was – dare I say it – a bit dull. It was positive and great but just too darned wholesome, frothy and saccharine.

As the EastEnders script editors apparently know, a gushing flow of happiness is lovely in principle but really not terribly interesting, which explains the inordinate murder / explosion rate of every soap opera on TV.

So it is that I cannot bring myself to sit here completing my list and submitting it to our illustrious Editor. It seems to me that if you’re reading Canal Boat then you already appreciate the charms of the canals anyway.

Having said all of that, I’m going to gush anyway but not in list format, starting with the Montgomery canal and its environs. I visited the landlocked twelve mile stretch that runs through Welshpool not for the recent Transport Festival but a few days afterwards to meet a horse.

Alright, technically not a horse but a pony; Cracker is a “Shropshire half leg” who pulls a 35-foot replica of a packet boat with day-trip passengers on board. What a delightful experience, moving along at quite the decent clip (clop!) in absolute silence. You hear the horse, the water, the nature and nothing else. It magnifies your enjoyment of the canal and, since having a horse for my own boat is somewhat impractical, has fully converted me to the idea of electric boating.

The Monty is also abso-flipping-lutely gorgeous. Just mindbogglingly lovely. Not terribly wide and somewhat overgrown with reeds in many places but those reeds shimmer with the dances of a thousand metallic-blue and green dragonflies. The water is shallow in many spots but clear, to the pleasure of the fish whose sharp “splosh” is heard frequently as you traverse.

And the scenery! Oh, that scenery. Rolling green hills stretching for miles in the distance, fields of emerald dotted with countryside cottages. It’s to die for, seriously. My family on my father’s side come from Wales and I suspect there’s some kind of fondness for it in my DNA but even so it would be a place I’d want to visit time and time again.

Of course, the Monty is not fully restored hence the section through Welshpool being isolated from the rest but fingers crossed the last few obstacles – road bridges which need subterranean locks constructed in order to get past – can be overcome.

I shall no doubt return to the Monty in years to come – with luck to celebrate its total restoration maybe – but in the meantime I’ve also returned to a canal I had the great pleasure of travelling down last year; the Staffordshire and Worcestershire.

You distinctly notice the difference when you exit Autherly Junction from the Shroppie and turn onto the Staffs and Worcs. Where the former was largely straight and open to the countryside, the latter is splendidly twisty and turny (a pleasant relief after all the dead-ahead boating of the Shroppie) plus a whole lot of it seems to be enclosed with a canopy of green with trees hanging over from both sides. It’s somewhat other-worldly although on a practical note not so much good if you have solar panels!

I was there for a brief trip on someone else’s boat, one of the perks of my occasional freelance work making corporate videos. Another splendidly sunny day, the seventy-foot boat headed south from Stourton junction where it meets the Stourbridge canal down towards Kinver.

In the golden fields to one side, bales of hay sat sunning themselves while below, the canal water sparkled like the sea as the tiniest breeze caressed and cajoled the droplets into a mild wavelike motion.

The trip was only an hour or so and even that simply because there were a couple of locks to negotiate. I’m rather jealous of the folk with moorings above the one at Stewponey, a long line of boats on a curved path with a gentle slope on the hillside above and wild grass growing long and healthy.

That said, what’s not to love about a mooring spot at Kinver too? All the facilities you’d ever need both in town and on the towpath, a good community feeling (I’m told) and options for travel either south to the Severn or multiple choices north whether up the Shroppie, right to Birmingham or straight on to Great Haywood.

All of this bucolic splendour brings me back, like a canal holiday loop, to my original point. I could write as many Top Five or Top Ten lists of why canals are wonderful as I wanted but they’d surely fail to convey the compelling appeal of the canals “in the flesh” and the only way to understand and be gripped by that is to experience them.

Even if not on your own boat, a trip on someone else’s – horse-drawn or powered! – no matter how brief, will, like a Magnum ice cream being slathered in chocolate, dip your body and soul into a realm that’s so far removed from the awful relentless pounding of everyday life that you cannot help but feel better about everything.

The perfection of the canals is in breathing in not simply the actual fresh air but also the atmosphere; of the boats, the people, the land, the planet and – dare I say – one’s place in the universe itself.

You know, they should really send the EastEnders team on canal holiday.

For more musings from the cut and the occasional picture of a duck or swan, consider following me on Twitter; you’ll find me @CruisingTheCut